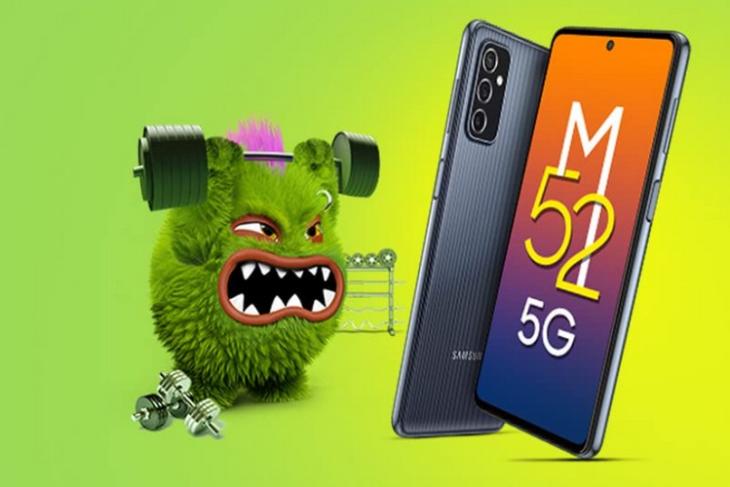 Samsung, as promised earlier, has launched one of the slimmest 5G-supported smartphones in India today. Dubbed the Galaxy M52 5G, the device comes with a super-thin form factor, a powerful 5G-supported processor, a 120Hz display, and many other premium features. Now before going to its price and availability details, let’s take a look at the key specs and features of the Galaxy M52.

Starting with the design, Samsung has been boasting about the thin design of the Galaxy M52 since it started teasing the device in India. The device comes in a 7.44mm thick chassis, which makes it one of the thinnest devices in India that supports 11 5G bands.

The Galaxy M52 features a 6.7-inch Full HD+ Super AMOLED display with support for a 120Hz refresh rate. The panel has 1080 x 2400-pixel resolution and a 20:9 aspect ratio. There is also a top-center punch-hole cutout, which Samsung calls the Infinity-O design, to house the 32MP selfie shooter.

Now, speaking of the cameras, the Galaxy M52 rocks a triple-camera setup on its textured back panel. There is a 64MP primary sensor, a 12MP ultra-wide shooter, and a 5MP macro sensor.

Coming to the internals, the device features the Qualcomm Snapdragon 778G chipset that powers some of the premium mid-range devices like the new iQOO Z5 and Xiaomi CIVI that was launched yesterday. It is coupled with 8GB of RAM and 128GB of onboard storage. There is also a MicroSD slot for storage expansion onboard.

You will also find a 5,000mAh battery with support for 25W fast charging aboard the device. Plus, it features a side-mounted fingerprint sensor, support for Bluetooth 5.0, Wi-Fi 6, and NFC. There is also a USB-C port for charging and data transfer.

The Galaxy M52 5G will run Samsung’s OneUI 3 skin based on Android 11 out-of-the-box. It will come in three color variants, including black, white, and blue.

The Samsung Galaxy M52 5G has been priced at Rs 26,999 for the single 8GB+128GB variant in India. Samsung will offer the device at discounted prices to HDFC customers in India at launch. The device is available to buy on Amazon starting from 3rd October.