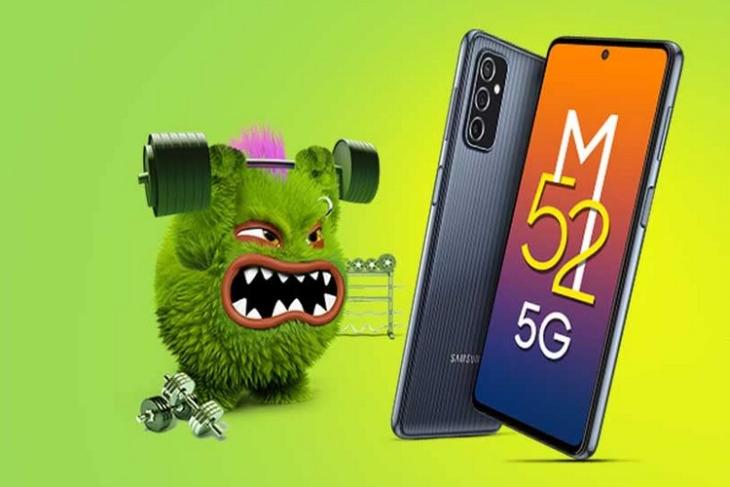 Samsung has been quickly expanding its mid-range M-series with more 5G-supported devices in India. Following the launch of the Galaxy M32 5G earlier this year, the company has now confirmed to launch the Galaxy M52 5G in India at the end of this month. The device will boast a slim design, 5G support, and various other features. Check out the launch date and specs details below.

Samsung took to Twitter to announce the launch date of the Galaxy M52 5G in India, which is September 28 (a day before the Xiaomi 11 Lite NE 5G). The company shared a short video to boast about the slim form factor, and you can check it out right here:

Previously, Amazon reportedly revealed that the Samsung Galaxy M52 5G will launch in India on September 19. However, that turned out to be inaccurate as the company did not launch the device this weekend. Now, Amazon has updated the dedicated M52 microsite to reflect the confirmed launch date.

Starting with the design, Samsung has been boasting about the slim form factor of the Galaxy M52 5G in its teasers. The device will be only 7.4mm thick. As per Samsung, it will be 21% slimmer than its predecessors, and will also come with 5G support.

Now, although Samsung has not revealed many details about the device, a retailer website in Poland has revealed some info about the price, specs, and features of the device. So, the Galaxy M52 5G will sport a 6.7-inch Full HD+ display with a 1080 x 2400p resolution and support for a 120Hz refresh rate. There will be a punch-hole cutout at the top center to house the rumored 32MP selfie snapper.

Speaking of the cameras, the device will reportedly come with a triple-camera setup. This might include a 64MP primary lens, a 12MP ultra-wide sensor, and a 5MP macro lens.

Under the hood, the Galaxy M52 will reportedly pack the Qualcomm Snapdragon 778G chipset, which was announced for premium mid-range 5G devices earlier this year. The device is also rumored to come with 8GB of RAM and 128GB of internal storage

As for the battery, the Galaxy M52 5G might feature a 5,000mAh battery inside. Other than these, there will be a USB-C port for charging and data transfer, a side-mounted fingerprint sensor, and support for 4G and 5G networks, Bluetooth, Wi-Fi, and NFC.

The device might come in three colors – Blue, White, and Black, as well as with a textured back. It is also rumored to run OneUI based on Android 11 out-of-the-box. The device is priced at PLN 1,749 for the base variant, which translates to Rs 32,805 in Indian currency. It will be available to buy exclusively from Amazon in India.