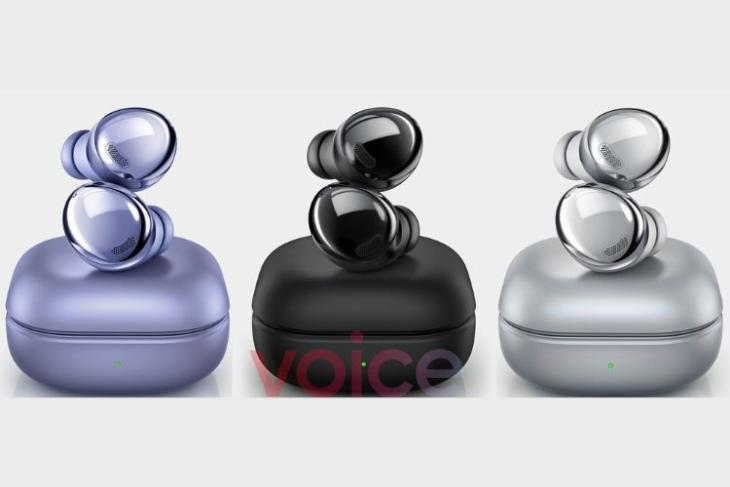 Samsung is set to unveil the Galaxy Buds Pro alongside the Galaxy S21 lineup on 14th January (rumored launch date). These TWS earbuds will arrive as the successor to the bean-shaped Galaxy Buds Live. We have already seen a myriad of renders leak over the past few weeks, but the official marketing slides for the Galaxy Buds Pro have surfaced online today. It confirms the design, key specifications, features, and a lot more.

Starting off with the design, Galaxy Buds Pro design will be an amalgamation of the Galaxy Buds Pro+ and Galaxy Buds Live. Samsung will return back to an in-ear design to offer better passive noise cancellation as compared to the Buds Live. You will obviously get Active Noise Cancellation (ANC) support. The earbuds look shiny on the outside (the same as Buds Live) and have a square charging case (not a pill-shaped one as the Buds+).

The earbuds, as per the leaked marketing deck, will include a dual-driver setup. It will include an 11mm woofer and 6.5mm tweeter, similar to the Buds+ from last year. Each earbud also includes three microphones for improved ANC, which is adjustable, and always-on Bixby support. The earbuds are also IPX7-rated, so you can use them at the gym or beach without any worries. You can check out the features supported by the Buds Pro down below.

The leak also sheds light on the battery size of the earbuds (61mAh) and the charging case (472mAh). This will enable the Buds Pro to offer up to 8 hours of music playback and up to 4.5 hours of talk time. It can be extended to a total of 28 hours of battery life via the charging case.

In addition, Redditor u/gamer0mega has shared screenshots of the Galaxy Buds Pro app. They not only confirm the design but reveal some of the key features as well. 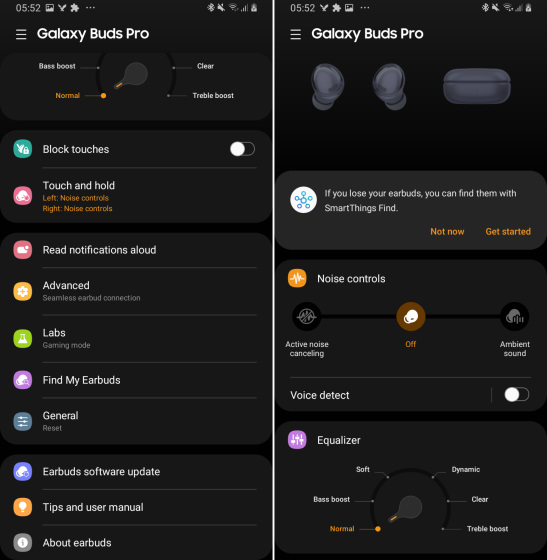 As you can see in the screenshots above, Samsung will offer you two levels of ANC (high and low) and four levels of ambient sound. You can choose how much of the outside world’s noise you want to let in while wearing the Galaxy Buds Pro. There is a voice detect feature to go with it as well. It will automatically lower the volume when it detects that someone is trying to have a conversation with you.

Galaxy Buds Pro will also borrow a feature from the Apple AirPods Pro – 3D spatial audio with head tracking. It will only be available on Android 11-based OneUI 3.0 devices though.

Samsung is expected to price the Galaxy Buds Pro at $199 (~Rs. 14,650) in the US. It’s slightly higher than the $169 price tag of the Galaxy Buds Live but should be worth it when you factor in the upgraded design, bigger battery, ANC, and other new features.