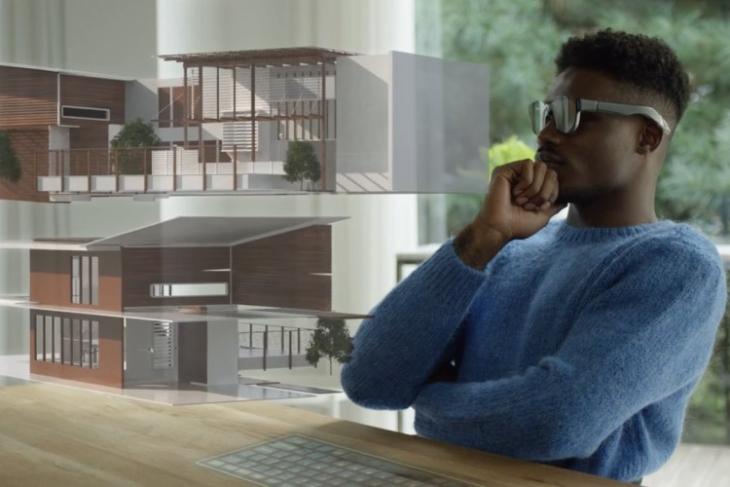 Moving from screens in our hands to screens in front of our eyes, a number of major tech giants are working on augmented reality (AR) glasses. Microsoft already has the HoloLens, Facebook is building one with Ray-Ban, and even Apple is rumored to be working on a powerful $3000 AR headset. And now, as per a recent leak, Samsung is also looking to dip its toes in the market. It has conceptualized its own AR glasses.

Well-known and reputable tipster WalkingCat shared a couple of videos that give us a look at Samsung’s vision for augmented reality products. The Korean giant is working on a pair of AR glasses, which will be marketed to two different sets of users – if they ever become a reality. These are merely a concept at the moment.

One of the AR glasses will be called Samsung Glasses Lite. It will be aimed at general users, offering them access to popular apps for video calls, watching videos, and more without having to touch their phone or PC. They can use it for work purposes, to send emails or research, as well.

Not just that, the leaked video also shows off a ‘Sunglasses Mode’ for the AR glasses. You can simply turn it on with the touch of a button. The Glasses Lite will enable you to pair a drone’s camera and see the footage in front of your eyes in real-time, as per the video. It sounds really immersive and impressive.

Also, as you can see in the video below, Samsung’s AR glasses will be a little chunky. The glasses will have a transparent display at the center. Plus, the sides will be touch-enabled and even have buttons to handle some tasks. It also shows an example of ‘Integrated Control’, where you can open or switch apps via the Samsung Galaxy Watch on your wrist.

and….. this is the 3D holographic version https://t.co/PXDAHjDNWb

While we get to see Glasses Lite in the first video in the tweet above, the second one offers us a closer look at the company’s enterprise-oriented AR glasses.

These AR glasses will slightly different capabilities than the consumer variant. It will be offering you some of the same features to get work done. You can write emails, hop in video calls, and more. But, these glasses set themself apart by enabling holographic video calls. The other participants will appear as holograms in your home/ office. You will also have the option to present them AR simulations, taking clients on a tour of your next project in a virtual space. Sounds science-fictiony, right?

Let me remind you, these are merely leaked concept videos. It is currently unknown whether Samsung is actively working on the AR glasses. We may or may not see the company unveil its vision for the future in the coming years. So, stay tuned for more information.