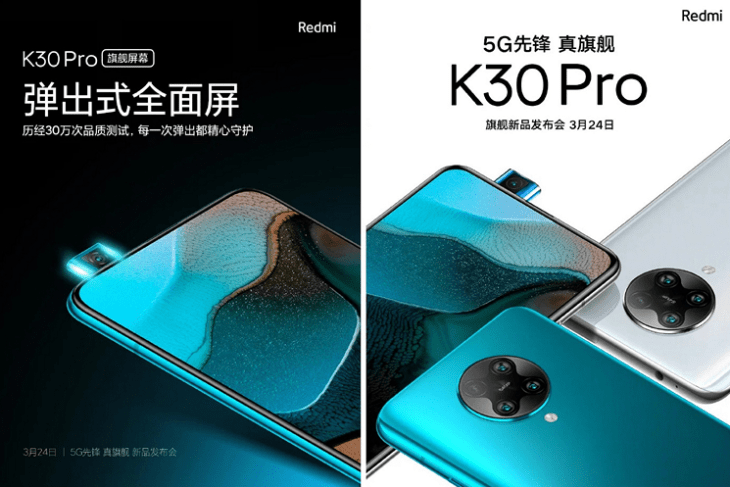 With the Redmi K30 Pro all set to be launched on March 24, Xiaomi has released another string of teasers on the social media in China. As can be seen from the image above, the teasers have revealed quite a few design aspects of the upcoming phone, including the notch-less full-screen display with a popup selfie-cam at the top. Interestingly, it also seems to have LED lights on the sides of the popup module, just like its predecessor.

Some of the other specifics that have been confirmed include the Snapdragon 865 SoC, a quad-cam setup at the back, an in-display fingerprint scanner and support for dual-band 5G networks. However, one of the most important revelations about the phone came from Redmi Product Director, Wang Teng Thomas, who announced that it would sport an AMOLED panel from Samsung, but only with a 60Hz refresh rate.

Meanwhile, a tweet from tipster, Xiaomishka (@xiaomishka), suggests that the company has confirmed some more aspects of the phone’s display in a new teaser. Those include a 5,000,000:1 high contrast ratio, 1200nit peak peak brightness, HDR10+ certification and 180Hz touch sampling rate – not to be confused with screen refresh rate.

The news about the lack of a high-refresh panel on the upcoming device will, no doubt, be a major disappointment for many potential buyers who might have been hoping for at least a 90Hz display if not a 120hz one. Thankfully, though, it will at least have an AMOLED panel and not an LCD one, unlike what some recent rumors seemed to suggest.

Either way, the Redmi K30 Pro is expected to bring high-end hardware, including the Snapdragon 865 chipset, up to 12GB of RAM and 256GB of internal storage. The rear-facing quad-camera setup may be headlined by the 64MP Sony IMX686 primary sensor, while a 4,700mAh battery with 33W fast charging may be on the cards as well. While some of the aforementioned tech specs are only rumors at this stage, we’ll only have to wait a few more days for them to be officially confirmed.