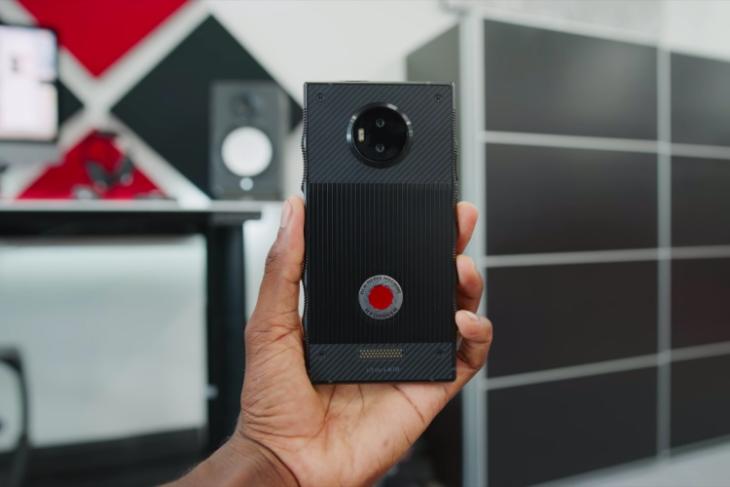 We have already witnessed the launch of a number of phones in 2018 and are still waiting on some major ones like the Google Pixel 3 and Apple iPhone XS. However, there’s another device, the Red Hydrogen One, that’s been on our radar for over a year now and we finally have an unboxing and hands-on video of the device.

Camera maker RED has been teasing its Hydrogen One smartphone and its mysterious ‘holographic’ display for a really long time, but its launch has been plagued with delays. However, the company has now given out 300 prototype units under its “Houdini” beta testing project, giving people who had pre-ordered the device a chance to get an early developer unit and help improve the experience prior to the official launch.

Popular YouTuber MKBHD has got his hands on one of these ‘Red Hydrogen One’ Houdini units and published an unboxing video of the same. As seen in the video below, there’s nothing outlandish in the Red Hydrogen One box, except for probably a glass and metal-built medallion.

In the box, you get a medallion, leaflets, a microSD card, charging adapter, USB Type-C  cable,and obviously – the phone itself.

The Red Hydrogen One is one massive phone, as is evident, but Marques reiterates this fact and goes on to talk about the rugged but stealthy aesthetic of the device. You can easily see the finger grips on each side and threads of the rear, which is going to make this device free of heart attacks, fingerprints and random slips- unlike today’s glass phones.

The holographic display is difficult to capture on camera and appears just like any other screen. The Red Hydrogen One also features a dual rear-camera module, along with a huge number of cutouts for its selfie camera, holographic display tech and the notification LED on the front. The power button doubles as a fingerprint sensor and there’s a 4,000mAh battery on board.

The device runs Android Oreo out-of-the-box, with the company’s own launcher on top along with a dedicated store for apps that support the holographic display. The camera app’s packed with a ton of features, along with the ability to shoot 4-view content but it’s being tagged as a work in progress.

There’s still a lot of things unknown about the $1200 Red Hydrogen One, like the use of those Moto Z-like pins ar the bottom and the camera modules but we’re content with at least the details that’ve been doled out. What are your opinions on the same? Tell us in the comments down below.