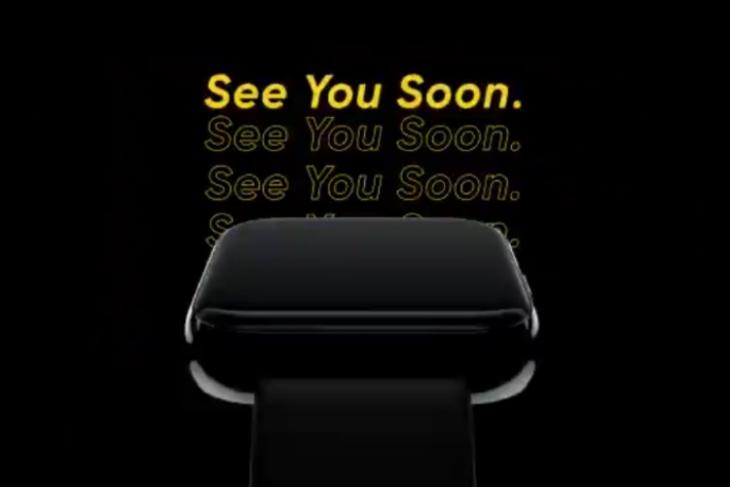 Merely a couple of days after the launch of its newest budget smartphones, the Narzo 10 and Narzo 10A, the company is gearing up to launch its next product in India. The much-awaited “Realme Watch” is next in line, as Realme has shared teasers on social media. It’sexpected to make its India debut very soon.

Realme India CEO Madhav Sheth took to Twitter today to share a teaser video for the company’s upcoming IoT product, i.e a smartwatch. Yes, Realme has been teasing its smartwatch for some time now. Now, its launch appears to be right around the corner.

The teaser does not give away much about the upcoming smartwatch. It only confirms the Realme Watch branding and shows off the display, which looks to be curved at the edges, for a split second. That’s all. There are no easter eggs for the launch date in the video attached below.

Watch me!
Are you ready to join our journey in becoming India’s Most Popular Tech-Lifestyle Brand?
Our next AIoT products are on the way?
RT to show your excitement. pic.twitter.com/3Ny6EEDMi4

The company may not reveal anything about the Realme Watch just yet. But, a recent leak not just gave us a quick look at the upcoming smartwatch’s hardware but also the software experience.

The teaser confirms that it will be a square-shaped watch, with the leak then backing it up with specs such as a 1.4-inch TFT LCD display with a 320×320 resolution and IP68 water and dust resistance rating. The smartwatch will run proprietary software and not wearOS, which already has an almost negligible presence in the market.

Realme Watch is further said to support a myriad of sport modes, just like the Realme Band, heart rate tracking, notifications, stopwatch, music controls, and a lot more. The leaked software screenshots also revealed that the watch will support measuring blood oxygen levels. You will find a 160mAh battery on board, lasting around 7-odd days on a single charge.

The company will share an official launch date over the coming days. And hopefully, the long-rumored Realme TV will also tag along as it was confirmed to debut in Q2 2020.