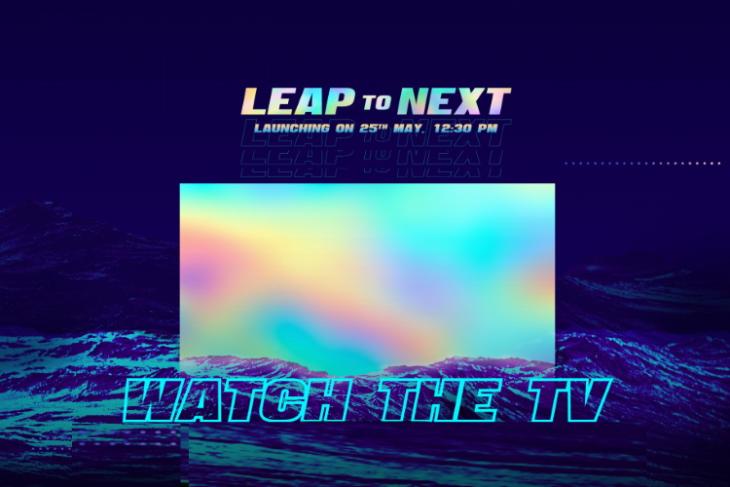 Realme has been teasing the arrival of its smart TV and smartwatch for months now. A myriad of leaks for both the products has been popping up online. But today, Realme is putting all the rumors to rest with the announcement of the launch date for the Realme TV and Realme Watch.

As seen below, Realme India CEO Madhav Sheth took to Twitter earlier this morning to share that Realme TV and Realme Watch will launch in India on May 25. The teaser poster shows off both the smart TV, along with the caption ‘Watch the TV’ and smartwatch, with a single button on the side. The company is holding a launch event in China on the same day. It is confirmed to debut up to 8 products, including the Realme X50 Pro Player Edition, Realme Buds Air Neo, and more.

Let’s #LeapToNext on 25th May!
With products that are Smart, Powerful & Trendy, we are on the path of becoming India’s Most Popular Tech-Lifestyle brand.
See you guys! pic.twitter.com/stXIk9VkfB

The teaser poster reveals next to nothing about the upcoming products. We only see a single button on the side and the Realme branding (below the display) on the front of the smartwatch – in line with leaks from last month. It is rumored to boast a 1.4-inch TFT LCD display, IP68 water and dust resistance rating, up to 7-day battery life, heart rate tracking, proprietary OS (not wearOS), and a lot more.

Realme TV, on the other hand, is expected to arrive in a 43-inch (108cm) model. It has already been certified by the Bureau of Indian Standards (BIS) last month, along with Bluetooth certification for the remote control. Stacks on stacks of the Realme TV were recently spotted at a warehouse, confirming the rumored screen size, packaging, and possible Netflix support out-of-the-box.

The official media invite for the May 25 launch event further mentions the arrival of other accessories along with the Realme TV and Realme Watch. Could the affordable Realme Buds Air Neo and more power banks launch in tandem? We still have around 10 days to go, so stay tuned for more information.