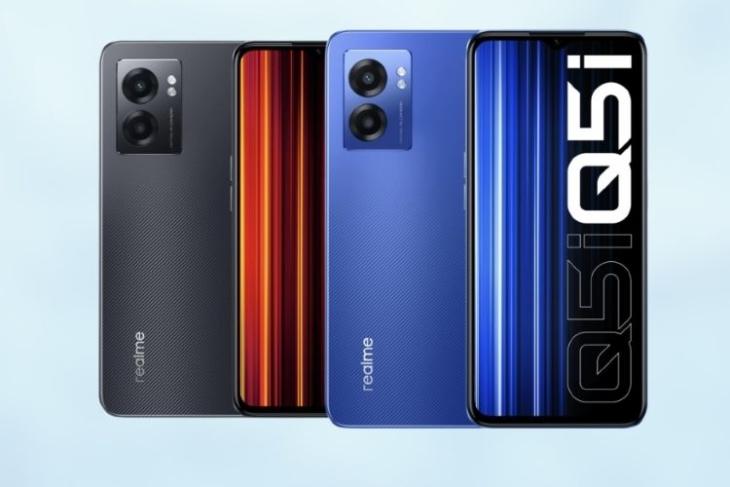 Realme has expanded its Q-series with the launch of the new Realme Q5i in China today. The device comes with a few highlights such as a 90Hz display, 33W fast charging, a 5G MediaTek chipset, and more. It will be joined by the Realme Q5 and the Realme Q5 Pro in China on April 20. So, let’s take look at the key specs and features of the Realme Q5i.

The Realme Q5i is an affordable option in the Q5 series and has a design similar to the GT series phones. The device features a 6.58-inch IPS LCD Full HD+ screen with support for a 90Hz refresh rate, a touch sampling rate of 180Hz, and a peak brightness of 600 nits. You will also find a teardrop-notch, which has an 8MP selfie shooter at the front. At the back, the device features a dual-camera setup, including a primary 13MP camera and a 2MP depth sensor.

Going inside, there is a Mediatek Dimensity 810 5G SoC powering the Realme Q5i. This is the same chipset, which has powered many budget-focused devices in the market like the Poco M4 Pro 5G, the Redmi Note 11T 5G, and the Vivo V23e 5G. The processor is paired with up to 6GB of RAM and 128GB of UFS 2.2 storage. There is also a microSD card slot to expand the memory. Furthermore, the device comes with a virtual RAM expansion feature that can expand the RAM by up to 5GB for uninterrupted multitasking.

Now, it is worth mentioning that the Realme Q5 series is exclusive to the Chinese market, and hence, it is currently not known whether or not Realme would launch the device in other markets. If it does, we expect the company to rebrand it as a different model. Do let us know your thoughts on the Realme Q5i in the comments below.