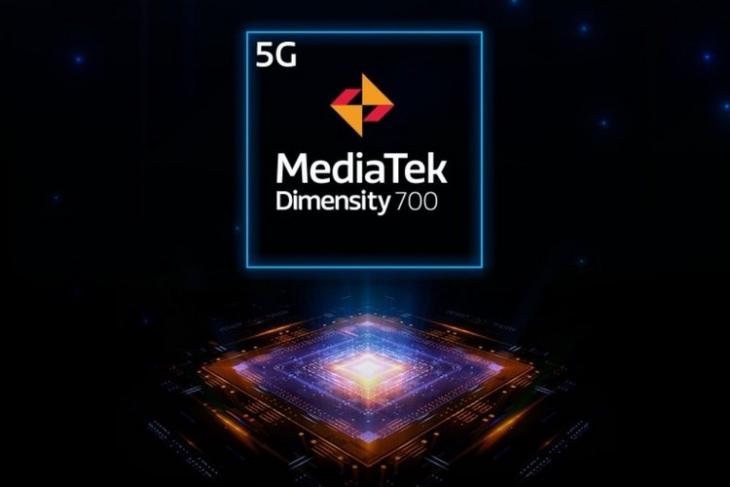 After taking the wraps off of the latest Dimensity 1200 and 1100 5G chipsets, which succeeded the Dimensity 1000-series, MediaTek today announced to bring its lower-end Dimensity 700 5G chipset to India. With this processor, the chipmaker aims to help manufacturers add more advanced features to their budget smartphones.

Now, if you did not know, Mediatek unveiled the Dimensity 700 5G chipset back in 2020. It is essentially a toned-down version of the Dimensity 720 SoC that was unveiled early last year. It is a part of MediaTek’s Dimensity series of 5G chipsets.

Now, the USP of the Dimensity 700 chipset is its 5G capabilities. It brings features like 5G Carrier Aggregation and Dual 5G SIM support to affordable smartphones. Moreover, it features MediaTek’s 5G UltraSave technology that enables the chipset to deliver download speeds up to 2.77Gbps.

Speaking of smartphones that will pack the new MediaTek Dimensity 700 SoC, Realme is confirmed to be the first brand to launch a smartphone with this chipset in India. Realme India CEO Madhav Sheth made the announcement via Twitter.

Another first from #realme!

We will be the first brand in India to offer the MediaTek Dimensity 700 5G Processor in our upcoming smartphone!

Can you guess which one will it be? pic.twitter.com/aH6xm8khcX

As confirmed by Sheth, Realme will be the first to launch a Dimensity 700 5G-powered smartphone in India. The chipset could be featured in the upcoming Realme 8 5G that will be a part of the Realme 8-series launched in India last month.

The Realme 8 5G is slated to launch on April 21 in Thailand, as per a recent Facebook post. The company, as per rumors, will launch the device in India on April 22.