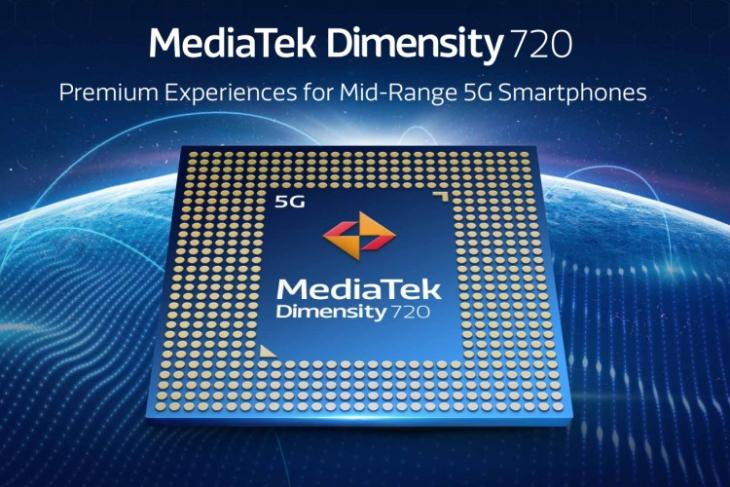 MediaTek continues to expand its 5G chipset portfolio and has announced a new mid-range chipset, the MediaTek Dimensity 720, today. The journey that started with the flagship Dimensity 1000 earlier last year has now moved to the sub-Rs. 20,000 price segment with the Dimensity 720. This could, however, be the precursor to the launch of the rumored Dimensity 600-series that will bring 5G to more mid-range phones in the coming months.

You will also find the ARM Mali-G57 MC3 GPU on board, which is almost the same as the Mali-G57 MC4 GPU on the Dimensity 800 chipset. Dimensity 720 comes with an integrated 5G modem, which supports both SA/ NSA sub-6GHz networks. It will offer you download speeds up to 2.35Gbps, which is pretty good. MediaTek is offering add-on features such as 5G UltraSave and Dynamic BWP to conserve power, as well as data usage.

Now, let’s talk about the supported specifications. Dimensity 720-powered phones can include up to Full-HD+ (2520 x 1080) display with a 21:9 aspect ratio and 90Hz refresh rate. They can also bake up to 12GB of 2133MHz LPDDR4x RAM as compared to 16GB aboard the Dimensity 800-series. It also supports UFS 2.2 storage type. This 5G chipset has a MediaTek APU on board as well.

Talking about the cameras, Dimensity 720 supports up to a single 64MP camera or a 20MP+16MP dual-camera system. You can record up to 4K (H.264/265) videos @ 30 FPS. The other connectivity options include 5G Multi-Mode, Bluetooth 5.1, WiFi 5, and even NavIC support for Indian users.

The company has not shared any specific timeline for when Dimensity 720-powered phones will be available in the market. We can, however, expect to see affordable 5G phones launch with this 5G chipset in the next couple of months.