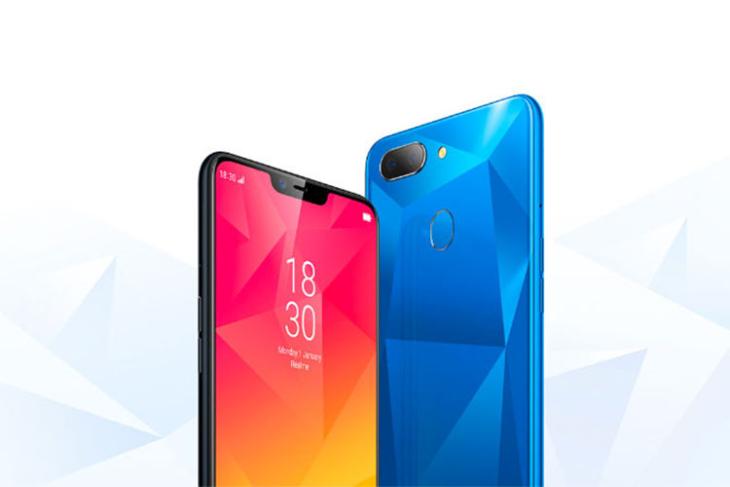 Realme, which has spun out of popular Chinese brand Oppo, is about to launch its second smartphone after the wide success received by its first smartphone – Realme 1. But even before the launch of the Realme 2, which is pegged for August 28, a poster revealing its specifications has been leaked online.

As per the leaked information, the Realme 2 is expected to sport a 6.2-inch display with a resolution of 720×1520 and a 19:9 aspect ration. The smartphone will be powered by a Snapdragon 450 chipset and will offer RAM options between 3GB and 4GB. There’s no 6GB variant as available in the case of Realme 1 which makes us feel that the upcoming smartphone could cost even less than the first one.

Additionally, the Realme 2 supports storage up to 64GB which can be expanded to a maximum of 256GB. The smartphone also gets dual cameras on the back with “AI Beautification 2.0” and a bokeh mode. On the rear is a 13MP+2MP dual camera setup while an 8MP sensor lies on the front.

The Realme 2 gets a fingerprint scanner which was missing from the Realme 1, beside a facial unlock system. The dual-SIM smartphone is also suggested to support dual VoLTE and feature a massive 4,320mAh battery.

The leak also suggests that the smartphone will come in the same diamond-cut designs which appear to be textured. The colors available will be red, blue, and black. Lastly, the Realme 2 will be rocking Color OS based on Android 8.1 and like the predecessor, we expect the upcoming smartphone to get updates to Android Pie.

#Realme2 with @qualcomm_in Snapdragon processor is designed to provide you #ANotchAbove experience with spectacular performance, ultrafast speed, astonishing graphics, and a long lasting battery.
Like if you’re as excited for the launch as we are. pic.twitter.com/33a6LrOv52

This is not the first leak suffered by the smartphone as it was briefly posted on the official website last week. While the image has since been taken down, it revealed a lot about the appearance of the Realme 2. However, the launch event is not far away and we expect to get a better look at the device next week. So stay tuned if you’re interested in knowing more about this attractive entry-level device.

Realme 2 Launched in India With Notch, Dual Cameras For Rs 8990

Realme 2 Teasers Hype Up Its Least Interesting Feature: The Notch