Skip to content
Home Mobile Razer Phone FAQ: Everything You Need to Know

Razer, as a gaming brand has gained quite a reputation over the past several years. They’ve made some excellent peripherals for gamers like headsets, mice, keyboards in addition to some powerful gaming laptops that’s packed with top-of-the-line hardware. However, the company’s focus changed earlier this year after they acquired Nextbit, the startup behind the “cloud smartphone” called Robin. The company has been hard at work for the past several months trying to develop a smartphone for their huge fan following filled with gamers. Well, the wait is finally over as the company just unveiled their very first smartphone, simply called the Razer Phone.

For starters, it looks beautiful just like the company’s other products, but at first glance, you’ll mistake this phone for a matte-black version of Nextbit’s Robin. It’s also arguably the most powerful Android smartphone that you can currently get your hands on. Well, if you’re already keen on getting one when it hits the stores, make sure you clear all your doubts regarding the smartphone by reading our detailed Razer Phone FAQ:

The Razer Phone is priced at $699 in the United States, and it will be available for purchase from Razer’s online store and Amazon.com.

Online reservations to purchase the Razer Phone has opened up today and sales will be done through Razer’s online store and Amazon.com with an estimated shipping date of November 17th.

Razer Phone will only be available in a 64 GB storage variant, but it does have a microSD expansion slot that supports cards up to 256 GB.

Razer’s first ever smartphone is only available in an all-black variant at the moment, a color that’s prominent in almost all of the company’s products. However, the company intends to sell 1337 Special Edition Razer phones which features their signature green logo on the back. Regardless, the overall color will still remain matte-black.

Razer doesn’t any have carrier partners for their phone at the moment, and therefore, only the factory unlocked version is currently available for purchase. 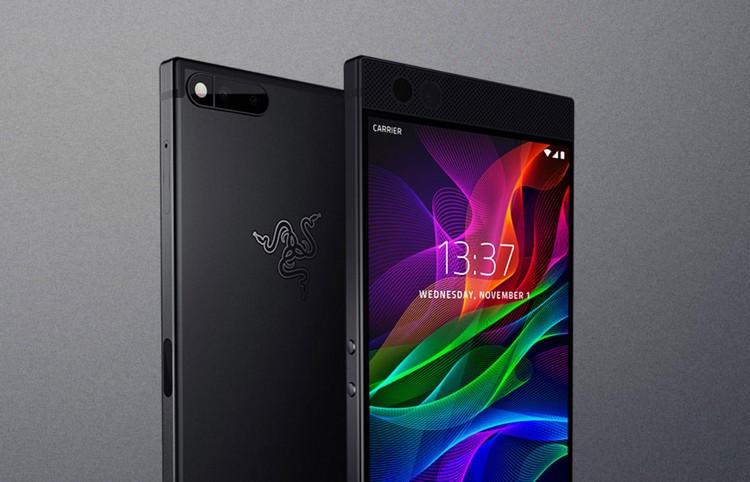 The new Razer Phone is crafted from aluminium, and just like their other products, the company makes no compromises when it comes to build quality. The phone looks and feels rock solid in the hand.

No, the Razer Phone does not have a bezel-less display. The company had to keep the top and bottom bezels to make room for the phone’s front-facing stereo speakers.

No, the new Razer Phone doesn’t have any IP certification, and hence it’s not dust or waterproof. So, make sure you don’t drop this phone accidentally into the swimming pool.

Yes, Razer’s first smartphone looks like an all-black version of the Nextbit Robin with sharp edges, but that’s understandable considering the fact that the company acquired Nextbit earlier this year. 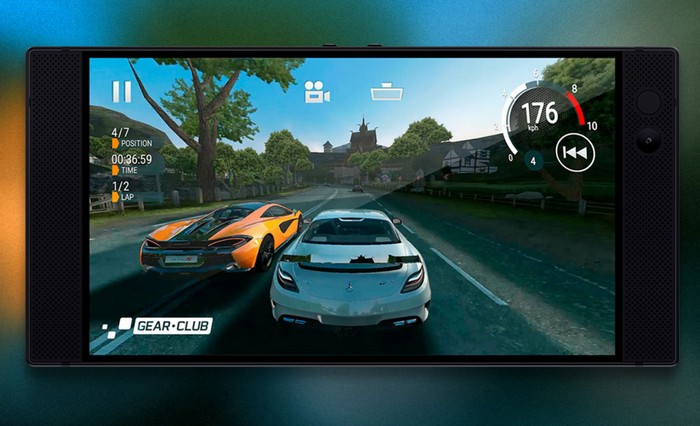 The Razer Phone is powered by Qualcomm’s top-of-the-line Snapdragon 835 octa-core processor, which is the same chip found in almost every other Android flagship released this year.

The Razer Phone makes use of Snapdragon 835’s integrated graphics chip, the Adreno 540 for handling all the graphically intensive tasks.

Razer’s first smartphone packs 8 GB of RAM to absolutely crush gaming and multitasking performance. The company has said that they’ve followed the necessary measures to take advantage of all the RAM.

Yes, this is one of the most important aspects of the new Razer Phone. It features Dolby Atmos certified front-facing stereo speakers with dual-amplifiers to deliver that loud and rich sound while you’re gaming or consuming media.

Yes, the Razer Phone does have a fingerprint scanner, but it’s weird embedded within the power button located on the right side of the phone. 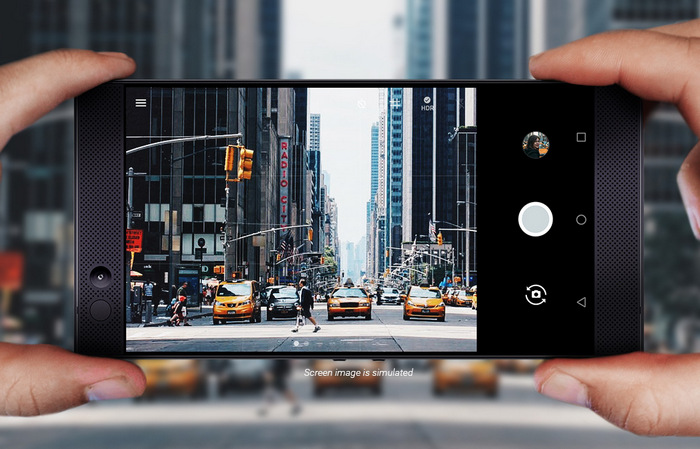 No, Razer’s very first smartphone doesn’t have Optical Image Stabilization in either of the rare cameras, so expect shaky footage if you’re shooting vlogs on your smartphone.

Although Razer Phone’s dual-camera setup does look impressive on paper, we don’t expect it to match the likes of iPhone X, Galaxy Note 8 or Pixel 2, as the lack of OIS will clearly impact both image and video quality. We’ll make the final judgement once we get our hands on one of the units.

The new Razer Phone has an 8 MP front-facing camera with an aperture of f/2.0 that should be able to do a decent job when it comes to snapping high resolution selfies and groupies with your friends.

Yes, thanks to the dual-camera setup with a wide-angle lens and telephoto lens, you’ll be able to take some impressive portrait photos with shallow depth of field.

The display on the new Razer Phone has a refresh rate of 120 Hz, which the company terms as “Ultramotion”. This is the first time we’ve seen a smartphone packing such a high refresh rate display, and it comes just months after Apple introduced the 120 Hz ProMotion display on their new iPad Pro. In comparison, almost every other smartphone including the $999 iPhone X packs a 60 Hz display. As a result of the higher refresh rate, animations and transitions will be much smoother and you’ll be able to experience significantly higher frame rates while gaming.

No, the Razer Phone does not have an OLED panel. Instead, it uses an IGZO IPS LCD wide color gamut display which is manufactured by Sharp. Sure, we’d have loved Samsung’s OLED panels, but Razer wouldn’t have been able to achieve the state-of-the-art 120 Hz refresh rate if they took that route.

Due to the lack of a bezel-less design, the new Razer Phone has a lower screen-to-body ratio compared to the competition, at approximately 72.7%.

The new Razer Phone packs a massive 4000 mAh battery, which is understandable considering the fact that the company targets the gaming community with this smartphone. With a display that boasts a 120 Hz refresh rate, it’s also essential to make sure that the battery doesn’t run out of juice pretty fast.

No, Razer’s first smartphone does not support wireless charging which is a bummer to say the least, considering most of the competition including Apple has caught up to the standard.

Yes, the Razer Phone supports fast charging out of the box. In fact, it’s also one of the very first phones to support Qualcomm’s Quickcharge 4+ which lets you charge a smartphone faster than ever before. You’ll be able to charge your Razer Phone from 0 to 50% in just 35 minutes.

No, Razer provides the fast charger for their phone in the box. Hence, no additional purchase is necessary to quickly charge your new smartphone.

The new Razer Phone will ship with Android 7.1 Nougat out of the box, but it will be receiving the Android Oreo update early next year.

No, the Razer Phone does not run on stock Android, but the software experience looks and feels pretty close to stock Android with barely any bloatware.

Not at all, but Razer is currently working with several developers to get their games optimized for the 120 Hz screen. As of now, games like Titanfall: Assault, Final Fantasy XV, Arena of Valor, etc are already optimized for the higher refresh rate display on the Razer Phone.

Instead of opting for a manufacturer-based skin, Razer has pre-loaded the prime version of the hugely popular Nova launcher, which is completely customizable according to your preference.

Yes, the new Razer Phone ships with an unlockable bootloader, so that you can fiddle around with your personal smartphone at your will.

No, Razer Phone will not be able to support CDMA networks like Sprint and Verizon in the United States. Instead, the phone will be available for use only through a GSM network like AT&T or T-Mobile.

Reliance Jio utilizes 1800 MHz, 850 MHz and 2300 MHz frequency bands for their LTE network across India, all of which are supported by the new Razer Phone. Therefore, you’ll be able to take advantage of the company’s VoLTE services.

No, the Razer Phone supports only a single SIM card, which is disappointing considering the fact that most of the competition offers hybrid slots that can be used for storing 2 SIM cards at a time.

No, the Razer Phone lacks a 3.5 mm headphone jack, which is disappointing to say the least. However, the company includes a USB-C to 3.5 mm dongle with a 24-bit DAC to deliver THX-certified audio, so this should not really be a major concern.

Unfortunately Razer’s first smartphone still features the older Bluetooth 4.2, so you won’t be getting the speed and range benefits that Bluetooth 5.0 has to offer.

Yes, the Razer Phone does have a microSD card slot that can be used to expand your overall storage up to 256 GB.

Yes, the Razer Phone just like several similar Android flagships supports USB-OTG out of the box.

Everything You Need to Know About Razer Phone

Razer’s first smartphone is nothing short of stellar, as it manages to outshine most of the competition in almost every department. You can even call it the best Android smartphone to date in terms of everything it has to offer. Sure, it would have been a complete smartphone if it had a bezel-less screen, but that’s the sacrifice you need to make for those powerful stereo speakers. Well, if you were keen on shelling out nearly 700 bucks on this new smartphone, we’re glad we could clear all your doubts in this detailed Razer Phone FAQ. So, what do you guys think about Razer’s entry into the smartphone market? Do let us know, by dropping your valuable opinions in the comments section down below.

Google Pixel 2 XL FAQ: Everything You Need to Know

Google Pixel 2 FAQ: Everything You Need to Know