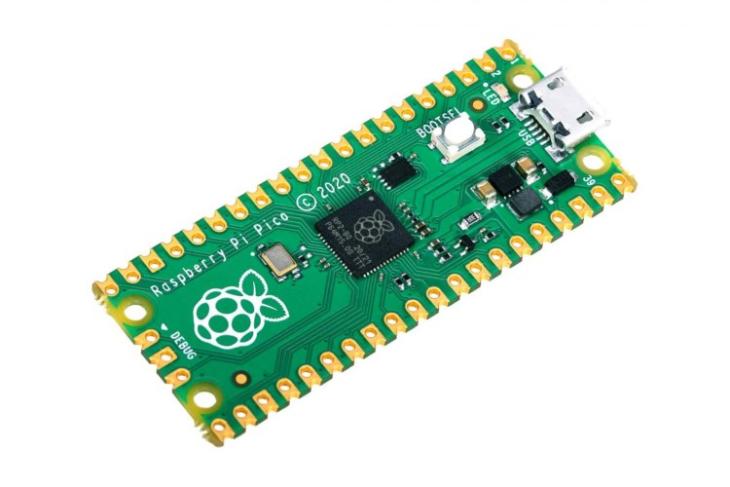 The Raspberry Pi Pico is the organization’s first step towards building its own custom chips, which is a really big deal. This microcontroller is backed by their first custom chip, the RP2040, which was designed in-house. What does it have on offer? Well, Raspberry Pi Pico includes a dual-core ARM Cortex-M0+ processor @ 133MHz, 264KB of RAM (yeah, kilobytes), 30 GPIO pins including four for analog inputs, a micro-USB port, a clickable button, and more.

What about storage? The microcontroller pairs RP2040 with 2MB of Flash memory but it supports up to 16MB of off-chip Flash memory via a dedicated QSPI bus.

Also, this board does not require a lot of power. The power supply chip on Raspberry Pi Pico supports input voltages from 1.8-5.5V. This means you can power the board using “a wide variety of sources, including two or three AA cells in series, or single lithium-ion cell,” as per the official blog post. You can get started with a breadboard design if you don’t want to solder down the components. Pico is programmable in MicroPython (python language for those looking to code for microcontrollers) and C/C++.

The Raspberry Pi foundation is now only launching its own board. It has reached out to companies such as Arduino, Adafruit, and Pimoroni to integrate its new RP2040 chip into their board designs. There’s already a healthy list of boards based on this custom chip listed in the blog post. This includes the PicoSystem game console, the Adafruit Feather RP 2040 board, and Arduino Nano RP2040 Connect.

As for the price, Raspberry Pi Pico is also super affordable and costs just $4 (~Rs. 290) in the US. You can get one for free with the February issue of the HackSpace magazine.