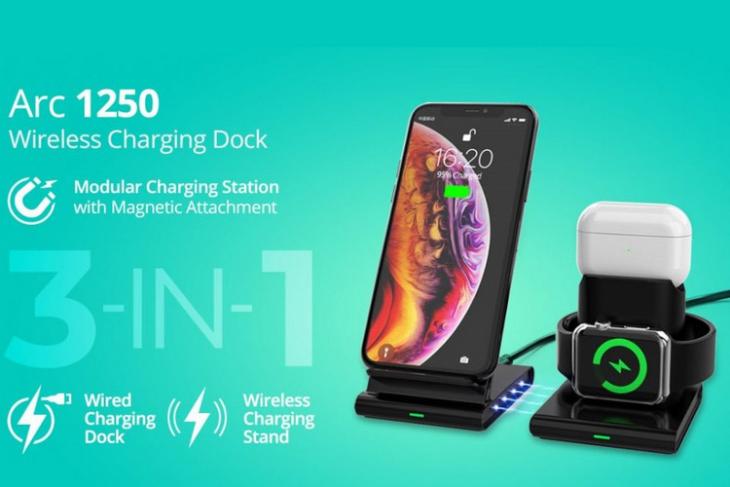 Bengaluru-based homegrown consumer electronics brand, RAEGR, has launched a new 3-in-1 modular charging station in India. Called Arc 1250, the device is a Qi-certified charging dock that offers wired and wireless charging options for up to three devices simultaneously. Compatible devices include Qi-compatible Android smartphones, as well as iPhones, Apple Watches, AirPods, and more.

The RAEGR Arc 1250 comes with a twin-module wireless charger and wired charging dock that can be magnetically paired and detached. What that means is that the device can be used as a single unit when attached together, or can be split into two separate modules to be used individually.

The left module (in the picture above) features up to 10W Qi-standard wireless charging stand that supports a QC 2.0/ QC 3.0 adapter (9V, 1.67A), while the right module features a wired dock where users can simply place their Apple Watch and AirPods to be charged simultaneously.

The two modules also sport an anti-slip silicone design to prevent the charger from moving or slipping during charging, said the company.

The RAEGR Arc 1250 comes with a number of built-in safety features, including over-voltage, over current, short circuit, and over-temperature protection as well as foreign object detection. The Arc 1250 is also built with an ABS fireproof body. It is available for Rs. 2,999 on both Amazon and Flipkart. It is also available for purchase on the company’s own official web-store.