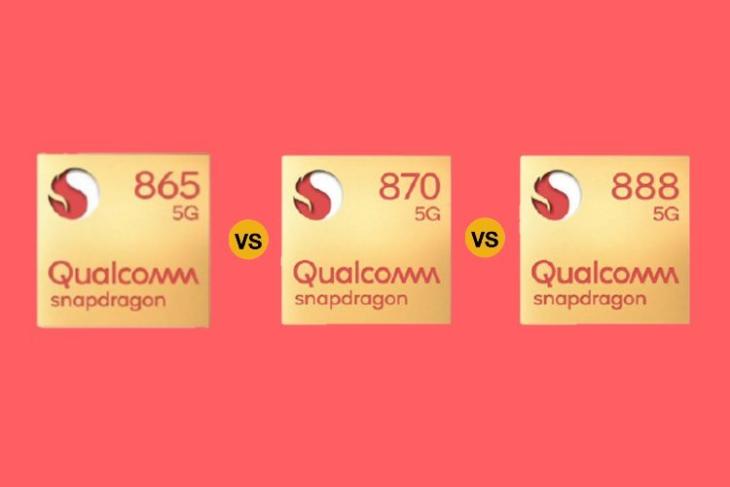 If you’re wondering how the Snapdragon 870 5G fits into Qualcomm’s flagship chipset lineup then you can check out our in-depth specs comparison and find out yourself:

As you can see in the table above, the Snapdragon 870 5G brings minor improvements over the Snapdragon 865 chipset. It is manufactured on a 7nm process node, includes the Adreno 650 GPU, Hexagon 698 DSP, Quick Charge 4.0+ support, and more — the same as its predecessor.

The Snapdragon 888 5G chipset is still ahead in terms of raw performance and power efficiency. It is based on a newer 5nm process node, supports the ARM Cortex-X1 core, Quick Charge 5 (for up to 100W charging speeds), and Wi-Fi 6E support in tow. Now, this begs us to question – why did Qualcomm launch the Snapdragon 870 chipset?

This is possibly the first time Qualcomm has refreshed an older-gen Snapdragon 800-series chipset and given it a minor boost to make it look new. The Snapdragon 870 5G chipset has launched to give consumers the impression that Qualcomm has brought a new budget flagship chipset in the market. It comfortably sits between the Snapdragon 765G 5G and Snapdragon 888 5G.

In the coming weeks, you will see news articles state so-and-so Xiaomi phone arrived with the “recently launched Snapdragon 870 chipset.” This gives users the impression that they are getting the latest and greatest with the device. But, if the company chose to include the Snapdragon 865+ in its phones in 2021, then the articles would say that the phone has last year’s chipset. This depreciates the value of the phone in the user’s eye, who’s looking to buy the latest technology.

Snapdragon 870 helps the phone makers break free of this image and launch budget flagships without having to worry about the judgment. We can expect to see a larger number of budget flagships launch in 2021 as compared to last year.

What Phones Will Be Powered by Snapdragon 870?

Currently, there are three companies that are expected to launch Snapdragon 870 5G phones in the coming weeks. This includes Motorola, Xiaomi, and OnePlus, as per the rumors making rounds on the Internet. Read on to find out more details about these phones:

Motorola has already confirmed that it will unveil the Motorola Edge S (codenamed Nio for global markets) powered by Snapdragon 870 in China on 26th January. It will feature a dual-camera punch-hole cutout for selfies, quad rear-cameras, side-mounted fingerprint sensor, and more.

Though the Redmi K40 series is confirmed to arrive with the Snapdragon 888 chipset in tow, the rumor mill suggests that there will be another model with the Snapdragon 870 chipset under the hood. This leak comes from reliable tipster Digital Chat Station and it mentioned an ‘unreleased sub-flagship processor,’ which has been unveiled by Qualcomm today.

Last but not least, the rumors of OnePlus 9 Lite launching alongside the OnePlus 9 and 9 Pro have been around for a long time now. We assumed it will arrive with last year’s Snapdragon 865 or 865+ chipset in tow. But, Qualcomm has confirmed that OnePlus is also working on a device with the Snapdragon 870 under the hood.

So yeah, stay tuned for the launch of a plethora of Snapdragon 870 5G-powered budget flagship phones in 2021. Which phone launch are you most excited about? Let us know in the comments below.