PUBG’s new Sanhok map, which is known for non-stop close-quarter action due to its small size, recently became a hot topic of discussion in the PUBG fraternity due to a bug, which essentially let players become invisible and rake in some easy kills without being discovered. The feature was a nightmare for those unaware of the exploit, but at the same time, it was used gleefully by those who knew the hiding spot.

Well, the days of fun (agony for some) are finally over, as the latest PUBG update on PC has fixed the issue, and has also introduced a host of changes with improved graphics for the Sanhok map being one of them.

Here’s a sample of how players hid under the map to exploit the glitch:

The latest update (PC 1.0 Update #17) on the test server also brings some terrain collision fixes, aesthetic enhancements to the Sanhok map and special themed visuals. Talking about visuals, some extra environment features have been added to the 4×4 map, such as the addition of new elements to Sanhok’s ruins which include a new cap on the central palace, cracked bells, etc. alongside improvements in the appearance of cliffs and rocks across the map to make them look more realistic. 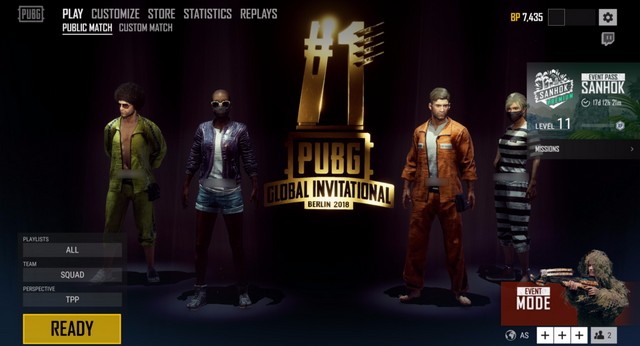 Moreover, to mark the upcoming PUBG Global Invitational (PGI) tournament set to be held in Berlin later this year, some PGI themed costumes have also been added to the game with a new lobby, redesigned loading screen and a new background score.

Another tiny but useful change introduced by the new update is that players will now see the estimated wait time for a match for their squad during the team assembly process.

Lastly, the crossbow misalignment glitch has been fixed and player movement issues created by a few objects in the Sanhok and Miramar map have also been resolved. The update has only been released on the test server and will be rolled out via the stable channel soon.