To be launched next week, the OnePlus Nord will mark the company’s return to the mid-range segment after a gap of exactly five years. However, it might not be the only mid-ranger from the company this year. That’s because a new OnePlus smartphone, possibly powered by the Snapdragon 690, has now been spotted on Geekbench.

Like Nord, the motherboard of the new device is also tagged ‘Lito’. However, while that particular device has the model number ‘AC2003’, this one comes with the model number ‘BE2028’. As for its tech specs, the new device is powered by an octa-core processor clocked at 1.71GHz. It also comes with 6GB of RAM and runs Android 10. Online reports are referring to the device as the ‘OnePlus Nord Lite‘. However, there’s no official confirmation about its name just yet. 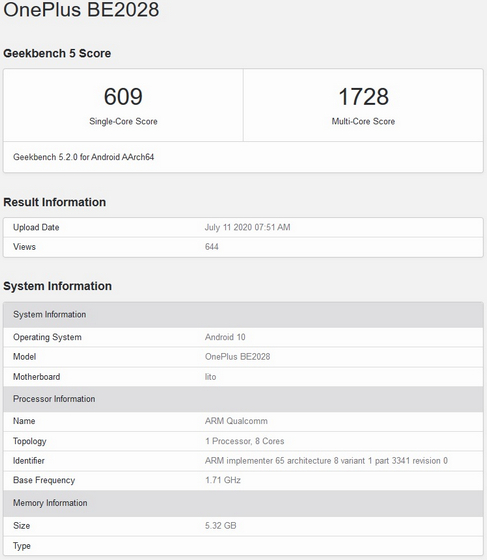 Announced last month, the Snapdragon 690 is a lower mid-range chipset with support for dual-mode 5G networks. It’s expected to compete with MediaTek’s newly-announced Dimensity 600 and, will likely bring 5G handsets to the sub-Rs. 20,000 segment in India and the sub-$300 segment globally. In fact, with aggressive pricing from the likes of Xiaomi and Realme, we might even see sub-Rs. 15,000 5G phones sporting either of the two chipsets by the end of this year.

Meanwhile, the latest discovery means that OnePlus may offer not one, but multiple mid-range smartphones this year. It will be interesting to see how that plays out, given that the company has largely stuck to premium devices up until now. Either way, there’s no more information on the upcoming device at this point. However, we hope to get more info about it in the days ahead.