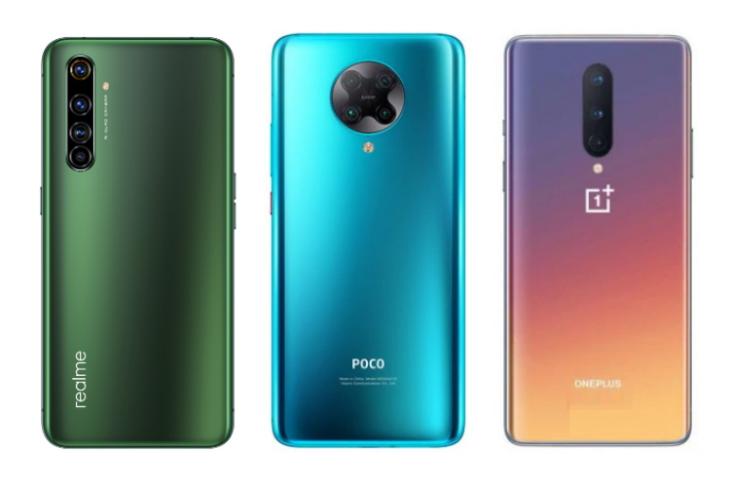 Where are my Poco F1 fans at? Well, Poco has finally taken the wraps off the Poco F1 successor in an online event today. Called the Poco F2 Pro, this smartphone not only packs inside the latest flagship hardware but boasts a premium design as well. This smartphone is available to order globally but we expect it to officially find its way to India over the coming weeks.

Now, if you’re planning to buy a flagship smartphone in India, then Poco F2 Pro will definitely be one of the options you consider. And it goes up against the Realme X50 Pro (first 5G-enabled Snapdragon 865 smartphone to land in India) and the recently launched OnePlus 8 in India. So to give you a clear picture of how the Poco F2 Pro is going to stack up against OnePlus 8 and Realme X50 Pro, here’s a super quick specs comparison between the three:

Let’s start off with the display. All of the three phones include an AMOLED Full-HD+ display with a 20:9 aspect ratio, 2400 x 1080 pixel resolution, and HDR10+ support. That’s surely a given in this price segment. They do differ in terms of screen size and selfie camera placement though. 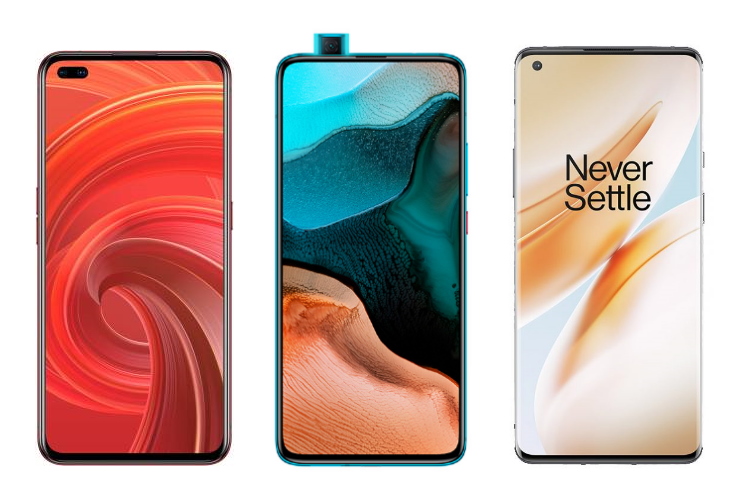 Poco F2 Pro includes an unintrusive 6.67-inch bezel-less fullscreen display. The selfie camera is housed in a mechanized pop-up module, which is great. But, there’s a huge shortcoming to this panel when you compare it to the OnePlus 8 and Realme X50 Pro. These two phones include a display with a 90Hz refresh rate as opposed to the 60Hz refresh rate of the F2 Pro’s display. Poco, a la Xiaomi, may compensate for the lack of higher refresh rate at a lower price compared to its competitors but I think it’s a huge disappointment in 2020.

Moving past Poco F2 Pro, the OnePlus 8 brings along a 6.55-inch display that’s curved at both edges to provide you a more immersive experience. The selfie camera here is housed inside a punch-hole cutout, so it looks pretty trendy and premium. Realme X50 Pro, on the other hand, offers a smaller 6.44-inch display with flat edges. Realme sets itself apart from its rivals with the inclusion of a dual-camera in a punch-hole cutout.

There’s no need to beat around the bush here. All of the three flagship phones we are talking about here are equally powerful. Poco F2 Pro, OnePlus 8, and Realme X50 Pro are powered by the Snapdragon 865 chipset from Qualcomm. All three phones also support dual-mode 5G connectivity (SA/NSA), thanks to the Snapdragon X55 modem onboard.

Note: Poco India General Manager, C Manmohan, earlier stated that Poco won’t launch a 5G phone in the country. So, we expect the Poco F2 Pro to arrive with just 4G support in India. This will help lower the starting price of the device, making it attractive to a larger section of the market.

The RAM and memory configurations do vary a little. While the Poco F2 Pro only brings along up to 8GB of LPDDR5 RAM, the Realme X50 Pro includes up to 12GB of LPDDR5 RAM in the high-end variants. OnePlus 8 lags behind and includes up to 12GB of LPDDR4X RAM> All three flagship phones have up to 256GB of storage on offer but Poco F2 Pro supports the latest UFS 3.1 (slightly faster) standard as opposed to UFS 3.0 on the other two. 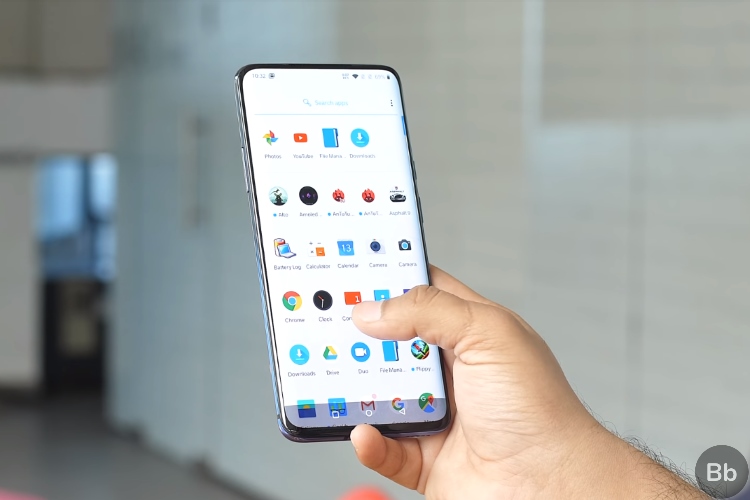 I bet there’s no debating the fact that OnePlus’ OxygenOS is the supreme leader of Android skins. OnePlus 8 is powered by OxygenOS 10 whereas Realme X50 Pro and Poco F2 Pro run Realme UI and MIUI 11 for Poco out-of-the-box respectively. All of these Android skins are based on Android 10.

OxygenOS is the snappiest, most feature-rich Android experience among the lot but I also like what Realme has done with Realme UI (quite similar to ColorOS 7). Xiaomi has again done wonders with MIUI 12, slimming down the UI and adding handy new features. The software experience of choice boils down to one’s preference, so which one would you pick?

Both Poco F2 Pro and Realme X50 Pro feature 64MP quad-camera setups on the rear whereas OnePlus 8 only brings along a 48MP triple camera array.

Starting off with the Poco F2 Pro, it packs a 64MP Sony IMX686 sensor, along with a 13MP (f/2.4) ultra-wide lens with a 123-degree FOV, a 5MP telephoto macro lens, and a 2MP depth sensor. Also, it’s only the F2 Pro that supports 8K video recording among the three competitors here.

We will have to get our hands on these flagships to compare the camera performance. But with input from online reviews and past experience, we can say that Poco F2 Pro may have better cameras among the three. OnePlus has long struggled with camera optimization and it still does. Realme has the most versatile camera setup among the lot.

Poco F2 Pro weighs the most among the three flagships in question but it also packs in the biggest battery – a 4,700mAh battery pack. OnePlus 8 and Realme X50 Pro, on the other hand, include a 4,300mAh and 4,200mAh battery packs respectively. The former will also be able to offer longer battery life than the other two flagships due to the lack of a high refresh rate display. 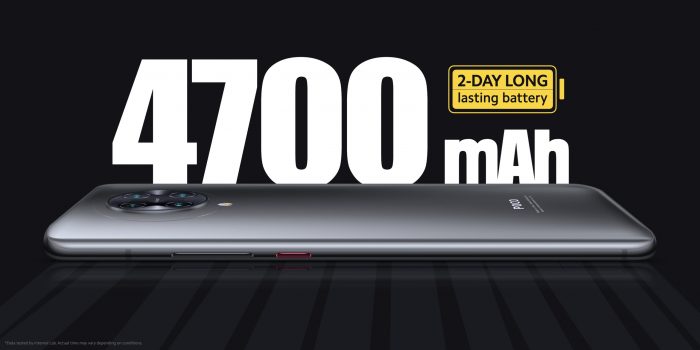 Poco F2 Pro vs OnePlus 8 vs Realme X50 Pro: Which One Would You Pick?

It’s a truly tough decision to make and we can’t deliver a final judgment until we have gotten to try out all three phones. Poco F2 Pro does offer you a salivating package at its price but the absence of a high refresh rate display makes me turn my attention to the competitors – OnePlus 8 and Realme X50 Pro – more often than not.

OnePlus 8 and Realme X50 Pro are already available in India while Poco F2 Pro should make its way to the country very soon. We will need to get our hands on these three phones to test out and let you know which is the budget flagship smartphone.

So, you do have some time to compare specs and think about the flagship smartphone you want to buy? If you have already made the decision, let us know your choice in the comments below.