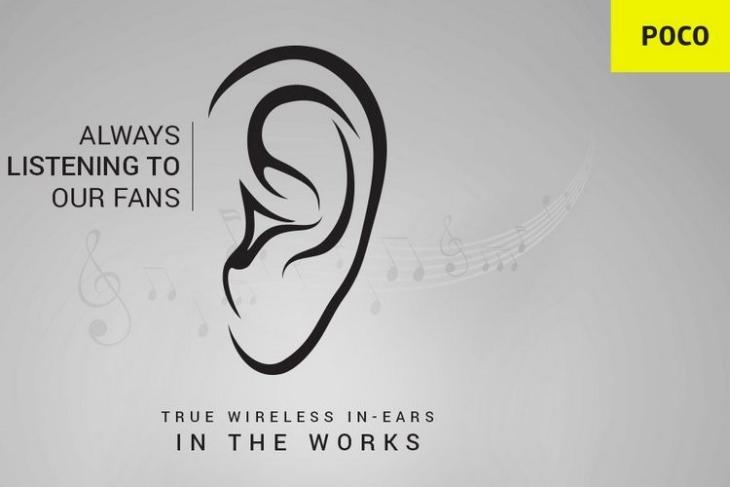 Last week, Poco India’s General Manager C Manmohan told fans in a virtual Zoom meet that the company is working on a truly wireless earbuds that would launch in India. Poco India has now confirmed the news on its Twitter handle.

“In the recently concluded poll by our GM @cmanmohan, the ‘True wireless in-ears’ got the highest vote share. Today, we want to confirm that it is in the works and will be coming to India.”, wrote Poco India. Take a look at the tweet below.

In the recently concluded poll by our GM @cmanmohan, the 'True wireless in-ears' got the highest vote share. Today, we want to confirm that it is in the works and will be coming to India.

RT to welcome the new category in the #POCO fam! #POCOTWS pic.twitter.com/pL8yPbFuPd

Poco GM conducted a poll on Twitter a couple of weeks back asking Poco fans to vote for the products they would like to see from the company apart from smartphones. In the final results, TWS earbuds led with almost 38.2 percent votes, followed by headphones with 23 percent and fitness band/watch with 21.9 percent votes.

Apart from the confirmation, Poco has not revealed any details regarding specifications or a date of availability for its TWS earbuds. Now that the company has officially confirmed the earbuds, we could expect teasers to follow in the coming weeks.

The company is also working on its much-awaited Poco F2. In the meeting last week, Poco GM confirmed that the Poco F2 will not be launched in India as a rebranded Redmi K30 Pro that got launched late March in China.

Just like Poco TWS earbuds, there’s no information regarding the specifications of Poco F2 as well. Except that it won’t be a rebranded K30 Pro, we also know it won’t be priced around Rs.20,000 like its predecessor Poco F1.