When Google released the first Pixel phones, I instantly fell in love with its software. Google’s take on Android is the most fluid mobile software experience I have ever had. I consider it to be even better than iOS when it just comes to fluidity and ease of use. With the launch of Pixel 2, Google updated its Pixel Launcher and made it even better and more responsive. While the Pixel launcher is arguably the best Android launcher out there, it’s sad that Google has kept it exclusive for its Pixel line of devices.

That said, it’s not the end of the road for non-pixel Android users, as there a ton of awesome launchers on Play Store which can give you most of the functionality of the Pixel Launcher, that too, without making you buy a pricey smartphone. In this article we are going to list those Android launchers which act as a worthy alternative to the Pixel Launcher:

If you are a regular Beebom reader, you must know that we love our Nova Launcher here. Most of our personal devices are running it and we have never had any complaints. For those who don’t know, Nova launcher is probably the best third-party Android Launcher out there. It brings a ton of customizability allowing you to change almost every aspect of the launcher. You can change desktop grid size, launcher theme, icon shape, size, and padding, and more. In fact, Nova launcher is so good that you can customize it to look and feel exactly like Pixel Launcher. 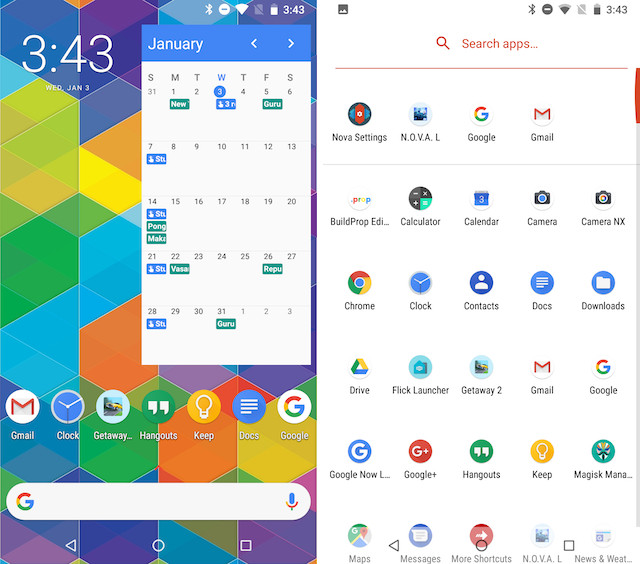 But, that’s not the only reason why I personally prefer Nova over any other launcher in the Play Store. I prefer it because the app has great developers who release new features and bug fixes on a continuous basis. Whether it’s Notification dots, app search inside Google search widget, swipe up to access app drawer, new Pixel 2 search bar at the bottom, or anything else, Nova gives me the opportunity to use these features even before many flagship devices receive them. Nova even allows you to use the swipe right to access Google Now page using its own Google Now companion plugin. All in all, Nova is the best Pixel Launcher alternative out there, and you should definitely check this out. 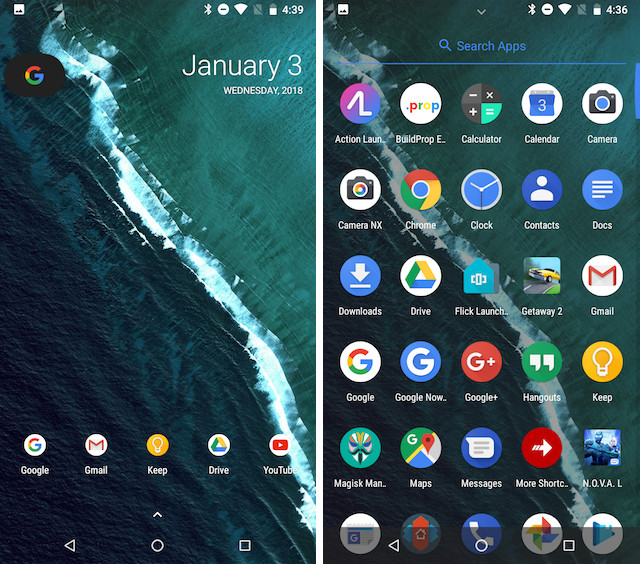 The launcher brings all the Pixel Launcher features such as Notification Dots, App Shortcuts, Adaptive Icons, Notification Previews, and more. You can also access the Google Now page by swiping right on your home screen. However, just like Nova, you will have to use Lawnchair’s own Lawnfeed add-on to enable this feature. The Launcher is also highly customizable, but that’s not really its strength. Its strength lies in bringing the Pixel Launcher looks and features without having to customize a thing. If you don’t want to spend time customizing your launcher but still want the Pixel Launcher features, Lawnchair is the one get. That said, it’s still in beta, so expect to find bugs here and there. 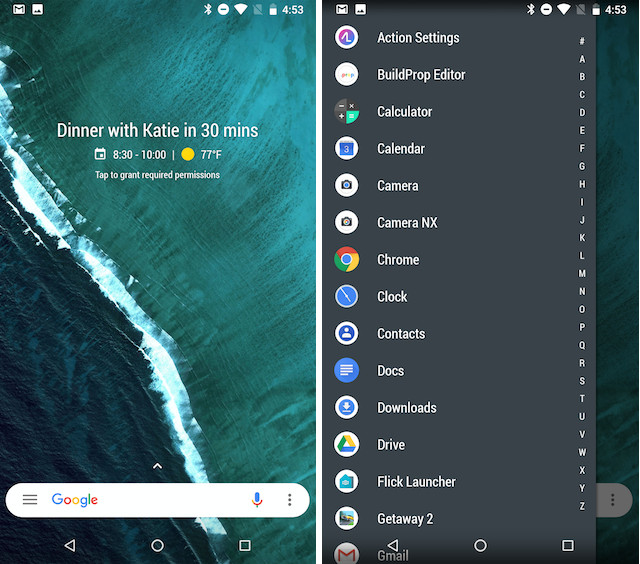 Also, there is no right swipe to bring Google Now cards feature, instead, the right swipe on home screen brings a handy app drawer which quickly allows you to launch apps. The app does allow you to swipe from the left edge of the screen to bring the Google search bar which eventually lets you access the Google now cards, but that feature is locked behind the paywall. If not for its aggressive paywall, Action Launcher could have been the top app on this list.

Evie Launcher is one of the lightest and fastest launchers out there. Although Evie Launcher might not look as close to Pixel Launcher as Lawnchair or Nova, it’s the best for anyone who prefers convenience over features. Firstly, its one of the easiest launchers to set up. It will take you no more than a few minutes to get the hang of the app. However, this doesn’t mean the Evie Launcher skims on features. Probably the only big feature missing from Evie is the lack of Google Now page when swiping right on the home screen. 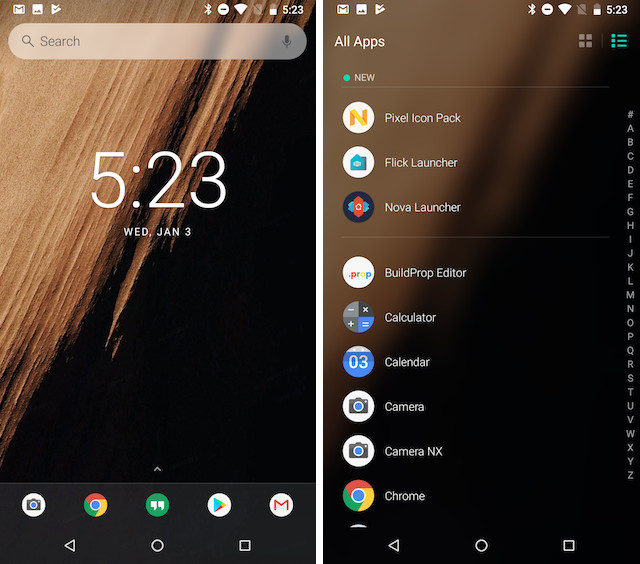 But the launcher more than makes up for it by including a swipe down universal search feature which I am a fan of. Think of it as Spotlight on iOS. The universal search feature allows users to search for media, contacts, apps, web, and more. In fact, I recommend Evie Launcher to others just for this one feature. It also helps that the app is completely free with no in-app purchases. Evie Launcher is one of the best Launchers on the Play Store which happen to be like Pixel Launcher.

I discovered Flick Launcher while researching about this article and I am so glad that I did. It’s one of the best Pixel Launcher alternatives out there. It brings all the usual Pixel Launcher features including Notification Dots, swipes left gesture to launch the Google Now cards, quick app search, automatic night mode, app shortcuts, and more. 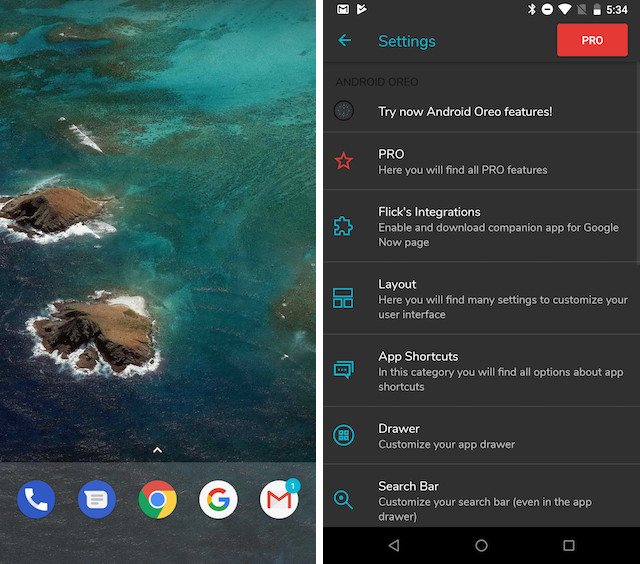 Flick Launcher also brings its own customizations like the ability to change desktop grid icons, icon size and shape, text color, text fonts and more. It also brings a ton of gesture support including one-finger and two-finger swipes from top, bottom, left, and right. Flick Launcher might be one of the newest players on block, but it’s also one of the best and a worthy Pixel Launcher alternative.

SEE ALSO: How to Get Pixel 2 Boot Animation on Any Android Device

As you can see, there are a lot of launcher apps on the Play Store which allow us to enjoy most of the Pixel Launcher features without having to buy the premium Google Pixel phones. My favorite app amongst them all is Nova, but I would love to hear which app you guys are rooting for. Try them out and let us know in the comments section below.

Pixel Launcher Will Get A Toggle to Turn On Dark Mode

Lean Launcher is the Rootless Pixel Launcher With Some Customizations