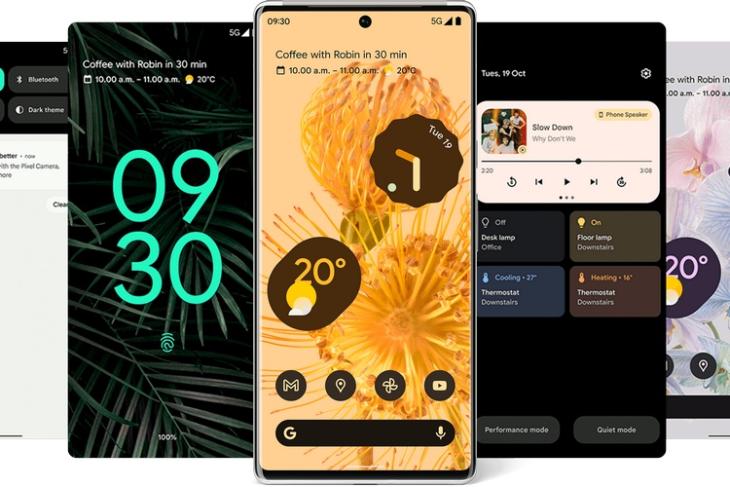 While we are almost two weeks away from the official October 19 launch date of the Pixel 6 series, renowned leakster Evan Blass has shared a bunch of official marketing renders of the Pixel 6 series on Twitter. Although we already know the design and key specifications of the Pixel 6, thanks to Google’s early sneak peek, the images from Evan Blass show off a bunch of new features and hardware. That includes the Live Space widget with flight card, Pixel Security app, confirmation of rear camera sensors, and the new Pixel Stand.

The first two tweets in the Twitter thread highlight the Pixel 6’s hardware design and the software interface. In subsequent images, we are also seeing some real-life images of the handset, a new case, and the new charging brick that Google won’t ship with the device.

Moving on to other tweets in the thread, we see the Live Space (upgraded version of At a Glance) widget with flight card details, including the gate number, seat number, and a QR code. This should help users in the flight check-in process and easily locate their flight in a bustling airport.

Up next, we have the new Pixel Stand and the Pixel Security app which will combine all the existing security features in one place (nothing new here). In the Pixel Stand’s render, we get to see the Pixel Stand charging UI with media playback and smart home controls. At first glance, it seems more useful than the Google Assistant ambient mode. You also have the option to switch between Performance and Quiet modes, presumably to control the Stand’s fan speed.