Skip to content
Home Internet [Update: Fix is Out] People Need to Stop Using the Telugu Character to Crash iPhones

So iOS 11 got hit by another bug. It’s no surprise really, iOS 11 has been a very buggy release. However, what stands out with the new bug is the fact that it’s a simple character that can crash iPhones… and people are posting it all over Twitter and Reddit.

It’s not really funny when you think about it. A massive bug such as this one can cause endless headaches to iPhone users all across the world, and while most of the tech world is concerned about how and when Apple might issue a fix, there are always idiots who will make it their life mission to troll other people with really very childish acts.

Just browsing through Twitter, one can sight multiple tweets that are nothing but that one character, with the sole aim of crashing any iPhones that might stumble across them. The same thing is happening on Reddit. 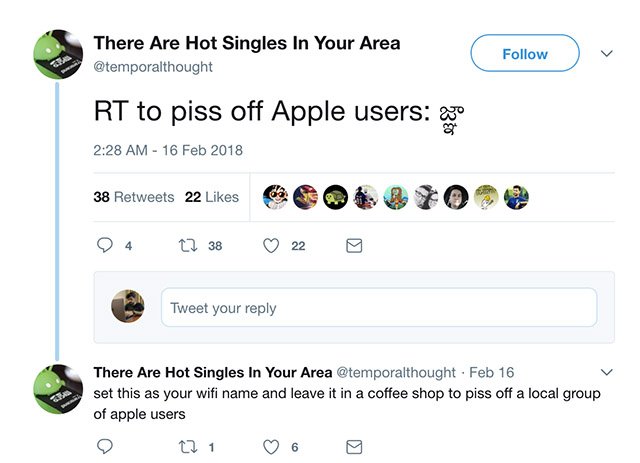 Look, I get it. This is probably the only thrill you get in your mundane daily lives, but it’s not funny to knowingly want to practically brick someone’s smartphone. You don’t like iPhones? Fine, good for you, get an Android and enjoy your life. Don’t go around traumatizing everyone who does like iPhones.

For most of the world, a smartphone is much more than a gadget, more like an extension of oneself, with almost all of their important and personal life stored on it. You have absolutely no right to use a stupid bug to put someone else into agony.

Fortunately, Facebook is already blocking the character from being posted on the platform, but Twitter is yet to take a step against this endless tirade against iPhone users that is really only cringeworthy and pathetic. Hopefully, Apple will issue a fix really soon, because this might very soon turn into a catastrophic issue.

Apple has now released iOS 11.2.6 to fix the bug on iOS devices. The company has also released bug-fixes for macOS. Please install the updates on your devices to ensure that your devices remain safe from the infinite number of trolls on the internet.