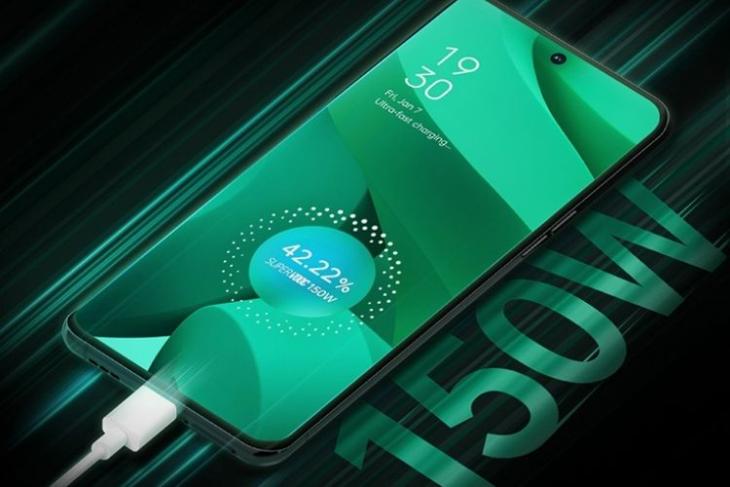 Following the unveiling of Realme’s 150W UltraDart Charging tech for its future smartphones, both OnePlus and Oppo have now unveiled their own 150W and 240W fast-charging technologies, respectively at the MWC 2022 trade show. While both the fast charging technologies have been developed by Oppo, it will reach Oppo, OnePlus, and Realme phones alike. Let’s take a look at the details.

Starting with the 150W SuperVOOC fast charging solution, it has been developed by the Oppo Research Institute. OnePlus reveals that the technology can charge a 4,500mAh battery from 1% to 50% in just 5 minutes, which is similar to what we saw with Realme’s latest fast charging tech.

OnePlus says that the 150W SuperVOOC charging system leverages a customized twin battery, a highly integrated microcontroller, and an industry-leading PCB protection board to deliver the necessary power to charge smartphones safely and efficiently. Plus, it also integrates a “Smart Battery Health” algorithm that apparently enables improved performance and longevity.

The charging system will reach tablets, laptops, and portable gaming consoles, other than smartphones. OnePlus has also confirmed that the fast charging tech will make its way to the market with a new smartphone that is slated for Q2 2022. Although OnePlus did not confirm the device yet, a recent report suggested that OnePlus is already working on the device to launch it soon.

Coming to Oppo’s 240W SuperVOOC charging tech, the company says that it can fully charge a 4,500mAh smartphone battery in just 9 minutes, which the company claims is a record-breaking achievement. Oppo showed off the charging tech in a short video that you can check out in the tweet below.

Oppo’s 240W SuperVOOC charging technology takes only three-and-a-half minutes for a 4,500mAh battery to reach 50%. It delivers similar power and performance as Xiaomi’s 200W HyperCharge tech from last year. However, there is no information on when Oppo plans to make the charging system available in the market. We also don’t know about the battery degradation details.

So, we suggest you stay tuned for further updates. Also, let us know your thoughts about the SuperVOOC fast charging tech from Oppo in the comments below.