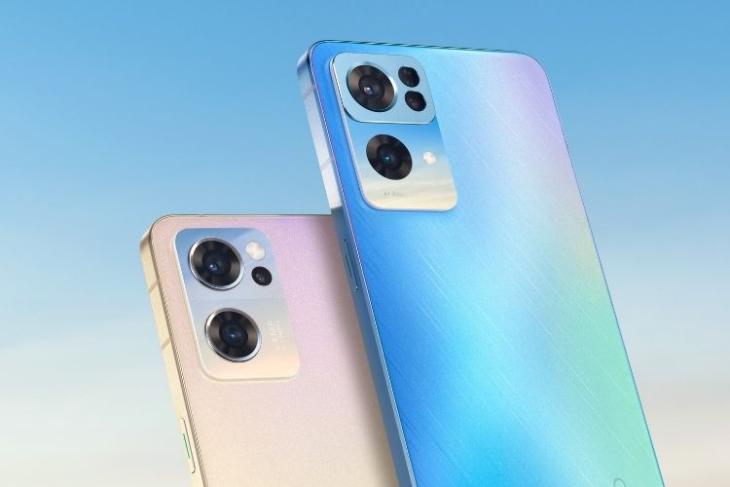 This Could Be the Oppo Reno 8 Pro!

In a recent report citing Indian tipster Ishan Agarwal, MySmartPrice shared a high-res image (presumably a marketing image) of one of the Reno 8 devices, revealing its colorways and the back design, which is similar to that of the Reno 7 series.

The device is said to feature a quad-camera setup at the back, housed inside a Samsung Galaxy S22-like contour-cut camera module that slightly protrudes. There are two large camera housings as part of the rear camera setup and two tiny sensors housed inside the third camera cutout.

The leaked image also reveals that the device will be available in four color options, namely, black, gold, green, and blue, possibly with gradient finishes. Although it is worth noting that the marketing names of these colorways may vary upon official launch. The phone is also seen with flat edges. You can take a closer look at the camera module in the image attached below.

Now, it is worth mentioning that although we know that it is an image of one of the devices under the upcoming Oppo Reno 8 series, we do not know which model this is. However, amongst the alleged Reno 8, the Reno 8 SE, and the Reno 8 Pro, we presume the leaked image is for the Reno 8 Pro.

Furthermore, you can probably see the “Powered by Marisilicon” branding on the camera module, which suggests that Oppo will integrate its in-house Marisilicon X Neural Processing Unit (NPU) into this device. The technology was introduced by Oppo last year at its Inno Day event and powers the Oppo Find X5 Pro’s Hasselblad-branded cameras.

As for the specs, the Reno 8 Pro is expected to be the first Snapdragon 7 Gen 1-powered device in the market, which is highly expected to be introduced at Qualcomm’s China event on May 20. The vanilla Reno 8 could be powered by a MediaTek Dimensity 8100 SoC. The phones could come with a 120Hz display, various exciting camera features, support for up to 80W fast charging, and loads more.

To get an idea of what the Oppo Reno 8 series is like, stay tuned for its launch in the coming days. Also, let us know your thoughts on the above-leaked image in the comments below.

Oppo Reno 8 to Be the First Smartphone to Feature the Snapdragon 7 Gen 1 SoC: Report