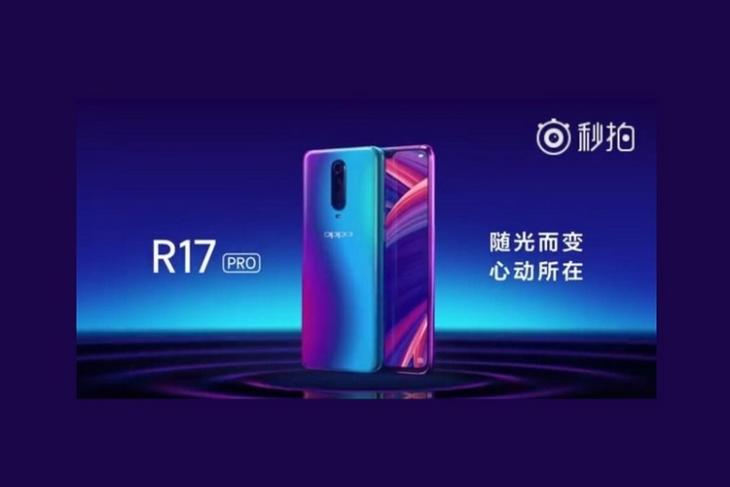 Just days after unveiling the R17, Chinese smartphone company, Oppo, has started teasing its next premium mid-range offering, the R17 Pro. As part of a teaser video on Chinese micro-blogging site, Weibo, the company has now revealed that the phone will carry forward with the hardware design seen on the standard R17 with a minimal teardrop notch and an in-display fingerprint scanner.

Interestingly, the teaser also reveals that the phone will come with a triple camera setup on the rear. It’s not entirely clear whether all three image sensors will be used for photography purposes, but some reports seem to suggest that at least one of them could be used for depth-sensing purposes using ToF (Time-of-Flight) 3D sensing technology.

While it’s still in the realms of speculation, a rear-facing depth-sensing camera could potentially open up the device to a whole host of augmented reality experiences, enabling users to take a virtual tour of an apartment or test-drive a new car in the virtual domain. While we cannot say anything for certain right right now, things will hopefully get cleared up on August 23 when the device is expected to go official.

It’s worth noting that Oppo’s sister company Vivo announced its own ‘Time-of-Flight’ (TOF) 3D depth-sensing technology at the MWC Shanghai back in June. The new system comes with 300,000 sensor points, which is 10 times as many as what’s found in Apple’s Face ID on the iPhone X. We have already seen this in the Oppo Find X.

According to Vivo, the new technology will bring “a paradigm shift in imaging, AR and human-machine interaction, which will elevate consumer lifestyles with new levels of immersion and smart capability”. There’s no word on whether Oppo is making use of that exact same tech in its upcoming handset, but it won’t be a massive surprise if that was, indeed, the case.

From what we know thus far, the R17 Pro will be powered by the Snapdragon 710, which will be a step-up from the Snapdragon 670 that powers the R17. For the rest of the tech-specs and features, one will very likely have to wait until next week.