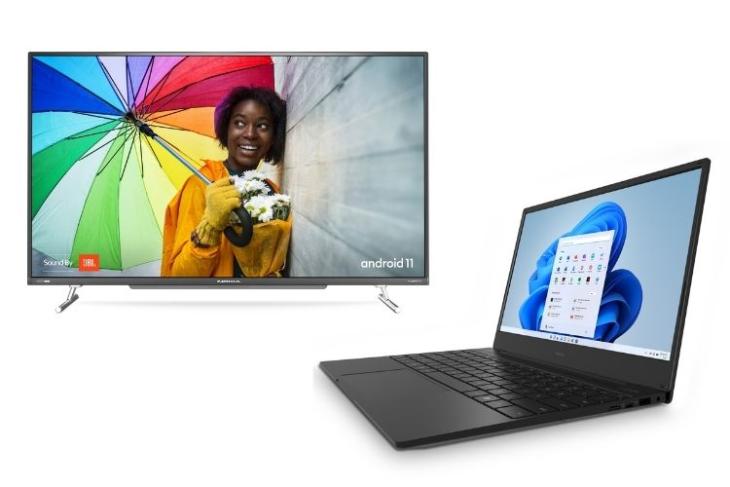 Ahead of Flipkart’s annual Big Billion Days sale event, which got preponed to October 3 recently, the company announced the launch of Nokia-branded smart TVs and a Nokia laptop in the Indian market. The Nokia QLED smart TVs come in 50- and 55-inches size options and the Nokia laptop, dubbed the Nokia PureBook S14, is one of the first notebooks to ship with Windows 11 in India.

Starting with the laptop, the Nokia PureBook S14 is essentially a thin and light device, running Microsoft’s to-be-released Windows 11 OS out-of-the-box. The notebook boasts a 14-inch IPS LCD panel with an 82% screen-to-body ratio.

Under the hood, the device includes Intel’s 11th-gen Core i5 processor with an integrated Intel Iris XE GPU. It is paired with up to 16GB of DDR4 RAM and 512GB of NVMe SSD storage. There is also a lower-end variant with 8GB of RAM.

As for connectivity, the Nokia PureBook S14 comes with a USB-C port, a USB-A 3.0 port, and an HDMI connector. Furthermore, the laptop supports Dolby Atmos to deliver an immersive audio experience.

Now, coming to the price of the Nokia PureBook S14, the device is priced starting at Rs 56,990 for the base variant with 8GB of RAM and 512GB of SSD storage. It will be available to buy on Flipkart from October 3, which is the same as the Big Billion Days sale event.

Now, coming to the smart TVs, the Android 11-based Nokia QLED smart TVs come in two size variants – 50-inch and 55-inch. They come with dual 60W speakers with JBL sound integration. The speakers will be powered by Harman AudioEFX to offer a theater-like sound experience to users.

The upcoming Nokia smart TVs will be available in Full HD, Ultra HD, and QLED variants. The 50- and 55-inch models are the first-ever Nokia-branded QLED TVs to come packed with Android 11. Other than this, Nokia has also released 43/ 50 /55-inch variant, which will come with a Full HD display. Furthermore, the company also announced that users of existing Nokia-branded smart TVs with sound by Onkyo will be able to upgrade to the latest Android 11 OS to get the new features.

Now, the QLED smart TVs from Nokia come with the Quantum dot technology with Active quantum filters. They also support Dolby Vision, HDR10+, and 102% NTSC color gamut. The LED variants, on the other hand, support Dolby Vision and HDR10+. All the smart TV variants from Nokia include a 1.1GHz quad-core processor paired with 2GB of RAM and 16GB of internal storage. There also be a 700MHz G31 GPU inside the smart TVs.

As for the price, the Nokia QLED smart TVs with Dolby Vision, JBL sound powered by Harman AudioEFX are priced starting at Rs 49,999 in India. They will available to buy from Flipkart starting October 3.

Other than the above products, Flipkart has also expanded Nokia’s audio accessory line with four new products. This includes a new T4010 Nokia headset and three new TWS earbuds with model numbers T3030, T3010, and T3020.

The T4010 Nokia headset is already listed on Flipkart at Rs 3,499. However, the other three TWS models will be available on the platform in October and start from Rs 1,499 in India.