Skip to content
Home News Flipkart and Amazon Prepone Sale to Rival Each Other in India; Both Go Live on October 3 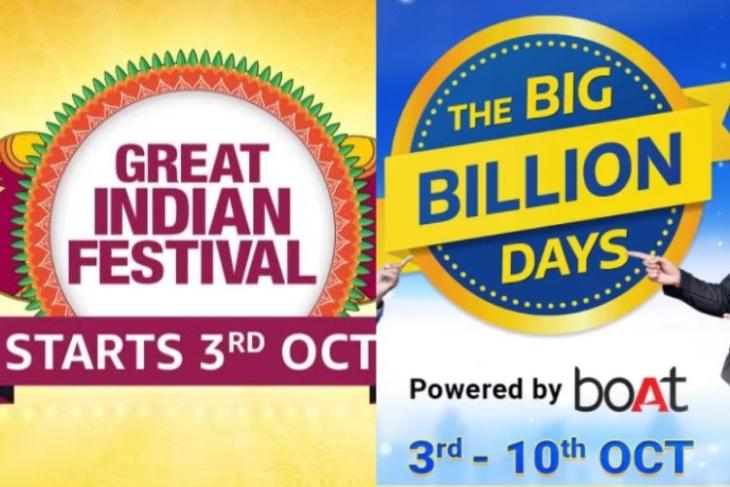 Last week, Flipkart announced its Big Billion Days sale event and confirmed that it will go live on October 7. However, a couple of days after Amazon announced the dates for its Great Indian Festival sale, Flipkart later preponed the sale and moved it up to October 3. Now, with the intention to lock horns with its rival in India, Amazon has preponed its annual sale event to October 3 as well.

Now, it is interesting to see two e-commerce giants in India go back and forth with the dates of their events to attract more customers. Initially, when Flipkart announced its 6-day sale event from October 7, Amazon announced its Great Indian Festival sale event for October 4, which is three days earlier than Flipkart’s event.

Citing this and fearing that most of the Indian customers will go towards Amazon, Flipkart changed its mind and moved up the date for its event to October 3, which was a day earlier than Amazon’s event. Then again, Amazon, in retaliation, announced to start its sale event on the same date as Flipkart. So now, both the companies will be competing to nab customers based solely on their deals and offers.

“We continue to innovate for our partners, small businesses and customers, as they gear up for the upcoming festive season. The Amazon Great Indian Festival will now start from October 3, 2021, and as always, Prime members will have early access,” an Amazon spokesperson said in a statement.

Now, coming to the deals and offers that both the e-commerce giants will be offering, there are a lot. Flipkart has partnered with over 100 new brands to offer discounts on 10,000+ products in categories ranging from smartphones, home appliances to fashion and furniture. The company will also be offering no-cost EMI facilities and a 10% instant discount for Axis Bank and ICICI Bank customers.

As for Amazon, the company has partnered with 850,000 sellers ranging from local shops to small and medium businesses. The event will feature deals from more than 75,000 local shops from 450 cities to boost local business. Moreover, one could expect 1,000+ new product launches from brands like Xiaomi, OnePlus, Apple, Lenovo, Asus, HP, and Fossil.