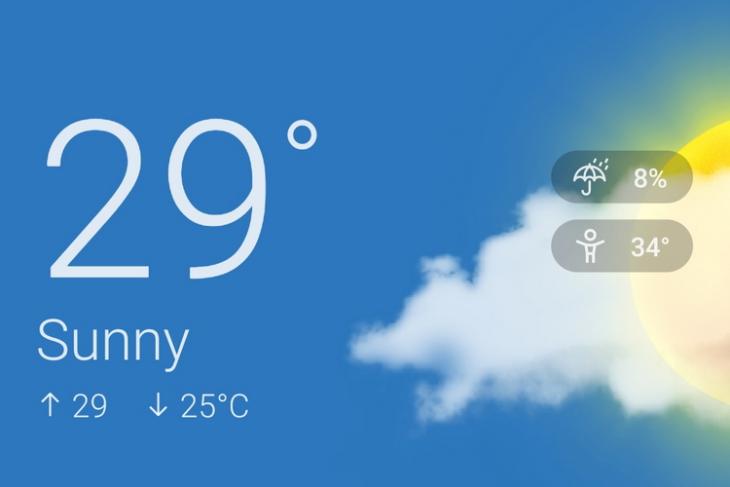 When OnePlus released the third developer preview of OxygenOS 11 for OnePlus 8 series, the company bundled the redesigned versions of stock OxygenOS apps such as the Gallery, Notes, and Weather. Ahead of OxygenOS 11’s stable launch, OnePlus is now rolling out the redesigned Weather app in beta through Play Store.

The new OnePlus Weather app replaces the minimalistic design of the current OnePlus Weather app with a fancier yet realistic interface. One UI-inspired changes introduced with OxygenOS 11 DP such as large fonts and huge numbers are prevalent in the app.

Right next to the primary temperature indicator, OnePlus has added two small buttons indicating the probability of precipitation and perceived temperature. Moving further down, we have translucent horizontally swipeable cards for hourly forecast, daily forecast, followed by other miscellaneous details.

My favorite feature, however, is the neat representation of sunrise and sunset timings. When you open the app and scroll to the ‘Sunrise & Sunset’ section, there is a snazzy animation that moves from sunrise to sunset.

If you own an OnePlus phone and have enrolled in OnePlus Weather’s Google Play beta program, you can simply update the app to start using it. Unfortunately, you can’t enroll right now as the beta program is currently full. However, you can simply install the app from APKMirror if you are interested to test the app before OnePlus officially rolls it out along with OxygenOS 11.

Since you’re essentially just sideloading the app, you can uninstall and reinstall the older version for now. However, that will not be an option once the company rolls out the new Weather app to the stable version.