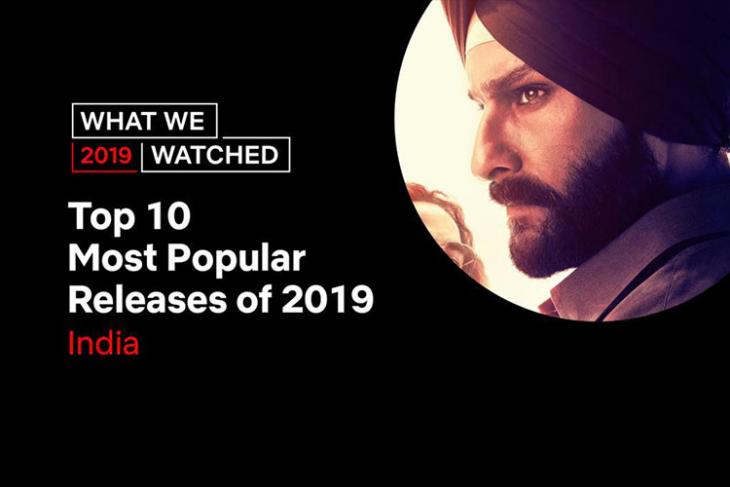 Seventy percent Netflix subscribers watch at least one film a week in India and as a percentage of overall time spent on the streaming platform, film viewing in the country is the highest for any country worldwide, the streaming giant said on Monday while announcing its list of most popular titles of 2019.

Celebrating shows and films that highlight the diversity of its content and the varied tastes of its members, the streaming behemoth said Sacred Games Season 2 was the most popular release of 2019 in India followed by Kabir Singh, Article 15, Bard of Blood, Drive, Badla, House Arrest, 6 Underground, Delhi Crime, and Chopsticks at the 10th spot.

The most popular releases of 2019 for India! Is your favourite among them? pic.twitter.com/1S91KAym0V

“We’re always looking for new ways to help people find something to watch on Netflix, and knowing what’s popular is a helpful signal. These 2019 ‘What We Watched’ lists should be especially useful over the holidays when Google searches for ‘what to watch on Netflix’ are at their peak,” the company said in a statement.

According to the firm, these lists are ranked by the number of accounts choosing to watch at least two minutes of a series, movie or special during its first 28 days on the platform in 2019.

“We are pleased at how overwhelmingly popular Netflix’s shows and films have become — with our Original series and films featuring prominently in the lists,” the company added.

This year has been an incredible one especially for Netflix films in the country as they have taken four of the top 10 slots. That’s good news for the company, especially as it’s facing tough competition at home from Disney+. The company added that across 2019 and 2020 it will invest Rs 3,000 crore in content in India. Netflix recently also announced that it earned $1 billion in revenue from the Asia Pacific region, so it makes sense for the company to invest heavily in India and South-east asia as well.