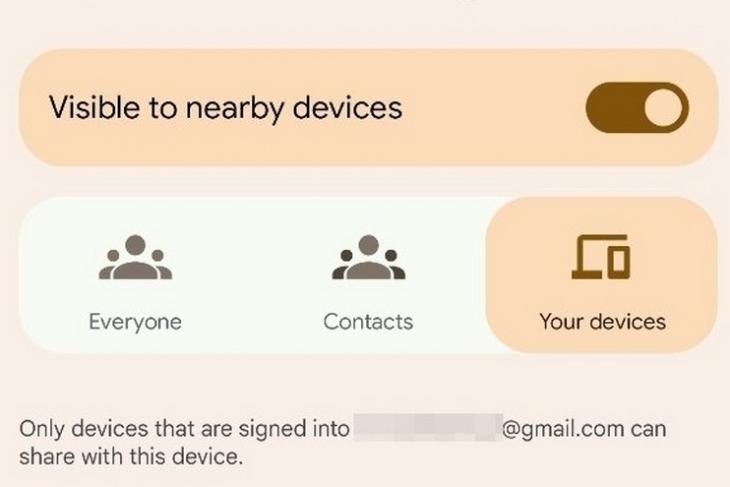 Earlier this year, we saw Google test a new “Self Share” mode for its Airdrop-competitor Nearby Share on Chrome OS that lets users easily share files between their own devices. Now, it seems like the tech giant is aiming to bring the same Nearby Share feature to Android users. Check out the details below to find out more.

Google Tests “Self-Share” Mode for Nearby Share on Android

According to recent findings by Esper’s Sr Technical Editor Mishaal Rahman, Google has added the ability to share files between devices that are signed in with the same Google account using Nearby Share on Android. Rahman took to Twitter to report the new feature, along with a screenshot showcasing the same. You can check out the tweet below.

Rahman further notes that the new self-share mode of Nearby Share will let users “share files to other devices signed in to the same Google account without needing to approve the share.” Currently, if you send a file via Nearby Share, even if the recipient device is your own, you will have to approve the process first.

With the new self-share mode, this approving bit will be removed, thus, making the file-sharing process much easier and smoother, be it on a smartphone or a Chromebook. Although it is a small tweak to the Nearby Share feature on Android. However, it is worth mentioning that you will need to approve the transfers when receiving or sending files from/to a device with a different Google account.

As for the availability, Rahman says that the self-share mode is currently available on the latest version of Google Play Services. However, Google has not yet rolled it out to users. It remains to be seen when Nearby Share’s Self-Share mode arrives on both Android and Chrome OS. We will update you once we have more details on this. So, stay tuned for further updates, and let us know your thoughts on the new Nearby Share feature in the comments.

How to Send and Receive Apps via Nearby Share

How to Enable and Use Nearby Share on Android

Google Chrome Brings Android’s Nearby Share to Windows PCs; Here’s How to Enable It