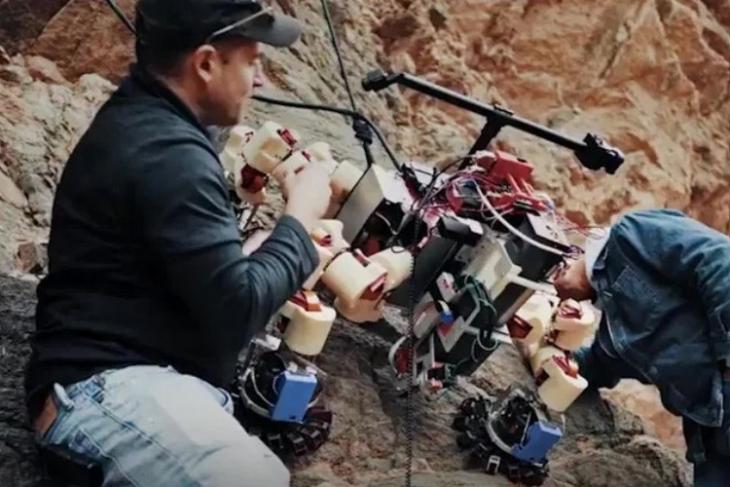 As technology and robotics have evolved over the years, NASA has developed numerous robots to perform different tasks that humans cannot achieve. Earlier we saw NASA invite robot enthusiasts to build a mini rover for the Moon. Now, the space organisation has developed a robot that can climb vertical structures and clutch on to rough surfaces.

NASA’s Jet Propulsion Laboratory (JPL) developed LEMUR, the climbing rover. The engineers originally made this robot for repair works on the International Space Station (ISS). The full name of the robot is actually Limbed Excursion Mechanical Utility Robots (LEMURs). This is because it has 4 limbs equipped with tiny hook-like grippers that can hold on to rough surfaces and start climbing. This is much like the original Lemurs, which is a specie of primates great at climbing.

Now, after the repair program of the International Space Station was shut down, NASA started testing the robot to further develop it. This is for any future space exploration mission. In early 2019, the team from JPL took the LEMUR to Death Valley near California for a field test. There, the robot climbed a vertical cliff using the hooks that fitted on its 16 finger-like structures.

On top of scaling the cliff, the robot was also to find biosignatures of ancient lives in the fossils. This was to test the rover’s ability to detect life if it ever goes on a space exploration mission.

Now, as robots like Moxi or that robot dog from Boston Dynamics are taking on human jobs, robotics is moving rapidly to its peak. And NASA plans to use these advancements to create LEMUR-like robots. This can help them to explore the universe much more efficiently.