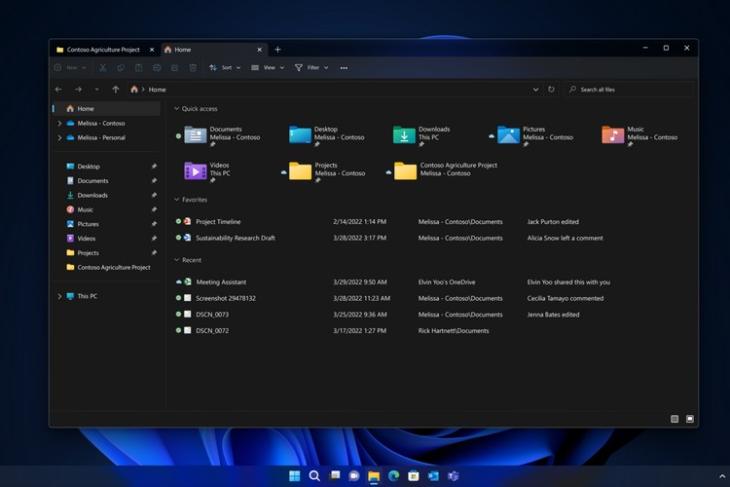 Microsoft has unveiled numerous new features and changes that will make their way to its latest Windows 11 platform as well as its cloud-based Windows 365 platform, which the company announced last year. These include features focused on hybrid work, improvements for system-wide video-calling experiences, and enhanced security features to keep users safe from phishing attacks. So, let’s take a look at the details below.

Panos Panay, the Chief Product Officer for Windows at Microsoft, recently shared an official blog post to announce the new features for Windows 11 and Windows 365 that focus on the areas of management, security, productivity, and collaboration. With these changes, Microsoft aims to blur the line between your local Windows 11 PC and your cloud-based Windows 365 PC with better integrations, a new tab-based central file explorer, and more.

Microsoft will be adding a nifty feature to File Explorer in Windows 11 that will let users easily browse multiple folders and files on their PC without needing to open multiple File Explorer windows. Instead, they will be able to take advantage of tabs to open folders in File Explorer, much like web browsers. Furthermore, users will be able to pin important files and documents for easy access.

The company will also be adding touch Snap layouts (rolled out on Dev channel builds), which will help users easily arrange apps when using Windows 11 on touch-based devices. Soon, users will also be able to create app folders in the Start menu. With all these new features and changes, Microsoft is aiming to make Windows 11 one of the most accessible versions of its desktop OS.

Some of the other new features will include Focus, system-wide Live captions, and Voice Access. These features aim to improve accessibility for disabled users and help them fully utilize and access Windows 11-powered devices.

Apart from making browsing easier on Windows 11, Microsoft has also added new smart security features to keep users safe from some of the common cyberattack techniques such as phishing and targeted malware with a built-in chip for cloud protection. The company will be integrating two new features to Windows 11, which include the new Microsoft Defender SmartScreen and Smart App Control.

The Microsoft Defender SmartScreen will protect users from phishing attacks by identifying and alerting users when they try to enter their Microsoft credentials in a hacked website or a malicious app. The Smart App Control feature, on the other hand, will use code signing along with the company’s advanced AI models to determine risky applications and will prevent them to run on a device.

Microsoft is also planning to bring these cloud-based features to hardware with the updatable Microsoft Pluton security processor. Various features for better IT management have also been introduced.

Microsoft has also unveiled several new features to improve the video-calling and virtual meeting experience on Windows 11. The company has confirmed that will soon add new AI-powered features like Voice Clarity and Voice Focus, Automatic framing, Portrait Background Blur, and Eye Contact. While the Soft Focus option will blur the user’s background, the Eye Contact feature will use AI to artificially maintain eye contact during video calls.

These AI-powered features will improve the video-calling experience in Windows 11 and will make it “more personal and more human,” as per Microsoft. The company is expected to deliver all these new features (and more) with future updates. So stay tuned for further updates and let us know your thoughts on the new features in the comments below.