Skip to content
Home PC Mi Notebook Pro vs Realme Book Slim: How Do They Compare?

We have compared the Mi Notebook Pro against the Realme Book Slim in complete detail. We have discussed the design and build quality, display, processor, and much more. You can expand the table below to move to a relevant section with ease.

Beginning with the design, it seems both are going for the MacBook look, especially the Mi Notebook Pro. The Mi Notebook Pro is made of 6-series aviation-grade aluminum alloy with a sandblasted texture on top to give you a smooth feeling across the chassis. On the other hand, Realme mentions that it uses a high-quality aluminum unibody design to give Realme Book a sleek and stylish look.

On paper, both Mi Notebook Pro and Realme Book Slim look promising, but we will have to wait for an in-hand experience to see which one is more premium in terms of design and build quality. 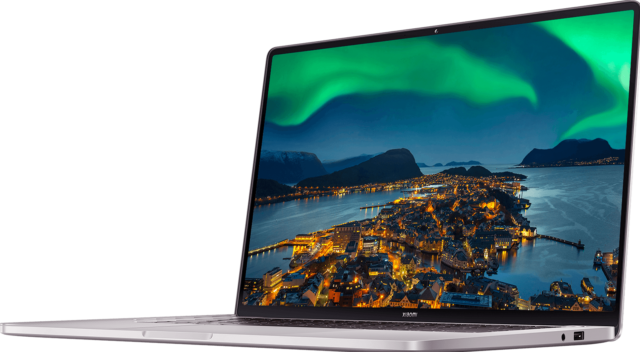 Things get pretty interesting on the display front. Both laptops are vying for the top spot as far as high-res panel and color accuracy are concerned. The Mi Notebook Pro features a 14-inch 2.5K display with a 16:10 aspect ratio, resolution of 2560 x 1600-pixels, and a refresh rate of 60Hz.

On the other hand, the Realme Book Slim has a 14-inch 2K screen with a 2160 x 1440-pixels resolution. It’s also a 60Hz panel, but Realme Book Slim comes in the modern 3:2 aspect ratio, whereas the Mi Notebook Pro is stuck to the traditional 16:10 form factor.

Finally, both the laptops offer you rich and all-encompassing colors as they cover 100% of the sRGB wide color gamut. So you can’t go wrong with either if you want a vibrant and color-accurate display.

The choice of processors on both these laptops is interesting. The Mi Notebook Pro goes with the new H35-series Intel processor built on the 10nm process node. It features the 11-gen Intel i5-11300H processor that has 4 cores and 8 threads. The processor has a base clock speed of 2.6GHz and can go up to 4.4GHz. The TDP is also higher and can draw up to 35W power. Overall, it looks like you have a decently powerful processor on the Mi Notebook Pro.

Coming to the Realme Book Slim, it features the 11th-gen Intel i5-1135G7 processor. It is built on the same 10nm process and has 4 cores and 8 threads. But its base clock is set slightly lower at 2.4GHz and turbo boost can drive the CPU frequency up to 4.2GHz. On the TDP side, it can draw up to 25W power in comparison to Mi Notebook Pro’s 35W.

If you strictly judge both the processors on paper, it looks like the Mi Notebook Pro has a better processor than the one on Realme Book Slim. However, in benchmark results, the difference is a marginal difference of 5% to 6%. Sure, the single-core performance on the Intel i5-11300H is a bit higher, but again, you lose on the battery efficiency front as it draws more power.

Overall, I would say the processors on both these laptops are pretty capable and almost similar. If you are someone who swears by high performance, I would recommend the Mi Notebook Pro over the Realme Book Slim. But if you want good performance and battery efficiency is also an important factor for you, Realme Book Slim is a good choice.

Moving to I/O ports, the Mi Notebook Pro features all the necessary ports, including a Type-C, a Thunderbolt4 port, two USB-A ports, HDMI, and a headphone jack. Whereas the Realme Book Slim misses out on the HDMI port, which is a bummer, and there is only one USB-A port. You do have a USB Type-C and Thunderbolt 4 port onboard. But I think the Realme Book Slim disappoints in the ports department.

The Mi Notebook Pro and Realme Book Slim both claim 11 hours of battery life and have a similar 56Wh and 54Wh battery capacity, respectively. But these are official numbers, and you should take them with a pinch of salt.

Realme explains that its laptop can run for 11 hours while playing a 1080p video on the device with no Wi-Fi connection, brightness set to 150 nits (around 40%), and 50% volume. In another simulated office-work usage scenario, the laptop went on for 8.5 hours. So on the battery front, you can expect 7-8 hours of battery life with mixed usage on the Realme Book Slim.

As for the Mi Notebook Pro, you may get a bit less battery backup as it comes with a more powerful H35-series processor. Talking about the charging speed, well, both the laptops come with a 65W Type-C power adapter. It can charge the laptops to 50% in about 30 minutes. The best part about Realme Book Slim’s charger is that it also supports the company’s proprietary Dart charging tech for Realme smartphones. That means it will offer a power output of up to 30W if you want to charge your phone.

Mi Notebook Pro vs Realme Book Slim: Which One Would You Pick?