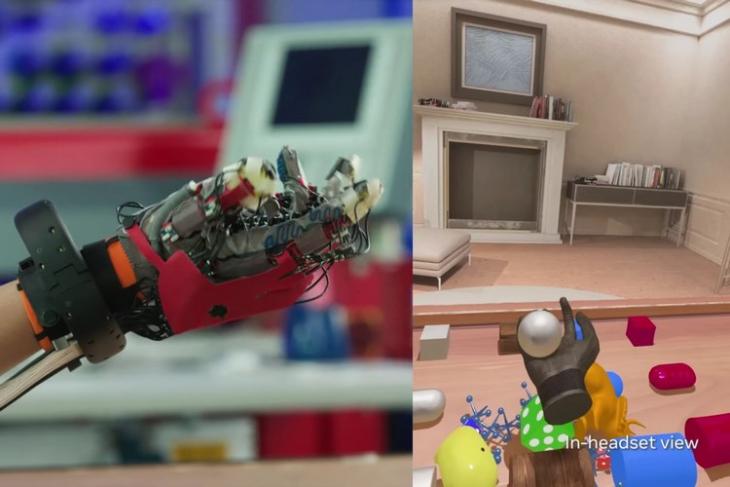 Meta, formerly known as Facebook, has been continuously working to make its idea of the Metaverse a reality. We have seen the company demo many new technologies in the AR/ VR department, including an AR-based wearable that lets users interact with virtual objects. Now, researchers at the Meta Reality Labs have developed a full-fledged working glove that lets you feel the touch sensation of virtual objects in the Metaverse.

Meta is calling these the Haptic Gloves as they essentially deliver relevant haptic feedback to users to make them feel that they are touching or holding a virtual object in their hands. The company says it has been working on the said technology for the past seven years. Although it started as a moonshot project initially, Meta now has the necessary technologies to make it a real product.

The company unveiled the Haptic Gloves via an official blog post recently. In the post, the company detailed the journey of developing the wearable. It also mentioned the specific scientific fields in which the Reality Labs researchers worked for the past years to make the Haptic Gloves a tangible device.

As per Meta, the researchers worked on perceptual science, soft robotics, microfluidics, hand tracking, and haptic rendering technologies to reach the current development phase of the Haptic Gloves. At this stage, even though the gloves look unfinished, they actually work. The company showcased the working of the wearable in a short video that you can check out below:

Now, coming to the availability of the Haptic Gloves, Meta says that it is still in its early stage of development. The researchers will continue to work on the project to make the wearable more user-friendly. According to the company, the gloves would be an essential product for the Metaverse it wants to create. They will be able to pair with your VR headsets and eventually with AR Glasses such as the Ray-Ban Stories in the future. However, it might take a few more years before we can get a pair of Meta’s Haptic Gloves from nearby stores.

“Today the gloves are made individually by skilled engineers and technicians who manufacture the subsystems and assemble the gloves largely by hand. We use semi-automated processes where we can, but manufacturing these gloves at scale will require the invention of new manufacturing processes,” said Reality Labs’ Research Process Engineer Katherine Healy.