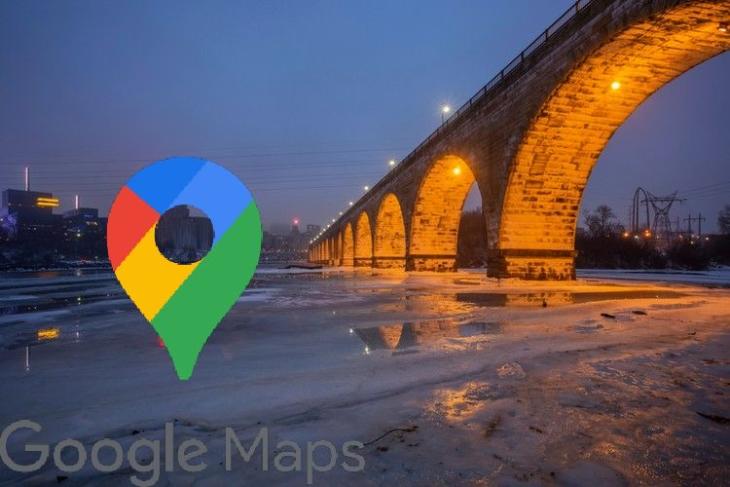 Google Maps is one of those essential applications that we absolutely need in our daily lives. It is a really beneficial tool to get us anywhere in a city using the fastest possible routes. Recently, the app got a revamp for its 15th birthday that brought a refreshed new look along with new features.

Although most of the times it works like a charm, sometimes it may fail to give you a reliable result. Despite the minimal flaws, Google Maps has not put anyone’s life in danger by providing them with dangerous routes or inaccessible paths, up until now.

Recently, a man claimed that Google Maps instructed him to walk on the frozen Mississipi River to cross the same. It happened near the Stone Arch Bridge in Minneapolis, Minnesota. The bridge is a former railroad bridge crossing the Mississipi River at Saint Anthony Falls in downtown Minneapolis.

Now as you might have already guessed, the man tried to cross the frozen river on foot. As a result, the ice broke and he fell through the broken ice. As per the reports, the incident took place at three in the morning, which explains a lot about the probable condition of the man. Remaining partially underwater, the man called for help. Soon the fire department arrived to rescue him. He told the firefighters that Google Maps directed him to cross the river. The fire department, however, said that it is highly unlikely that the app guided the man to cross the river on foot. Most likely it directed him to use the Stone Arch Bridge nearby to cross the river.

Now, it is already known that apps like Google Maps will not direct users to take any road which is not mapped in the servers. It will only give routes for your destination according to the known mapped roads. In case if the app directs you to a route on which you may face risky situations, it will alert you and suggest to take a different route to reach your destination. All this is to say that it’s highly unlikely that Google Maps was at fault here.