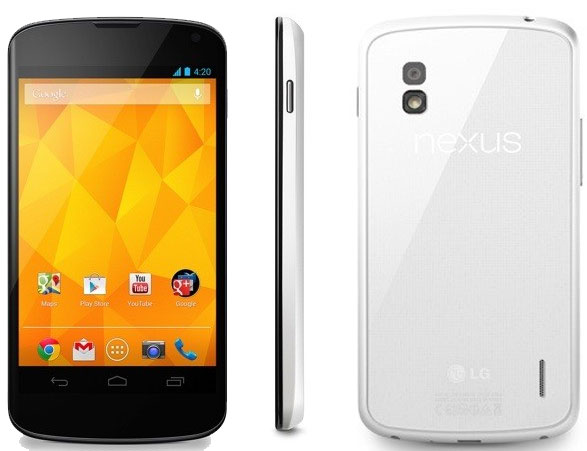 LG recently launched the Nexus 4 black version 16 GB version in India and the product became one of the hot selling smartphone in India. Within a few days, the product was out of stock, US and UK also faced the same problem with the stock and India is no exception. Looking at the growing sales of Nexus 4 in India, LG eagerly launched the white version of LG nexus 4 that comes with pretty much the same specifications found on the black version.

Although most users blindly buy a Nexus 4 device considering the fact that its offering good features at lower price than its rivals, it’s the device that is future proof at least for a couple of years, Google timely gives new updates and nexus devices are the first to receive it. It also comes with unlocked boot loader so you can easily root it and install custom ROM, there are a lot of choices.

But there are some features that you should keep in mind before buying a Nexus 4. The camera is good but has average capabilities, you can’t expect too much from its camera and looks pale when you compare it with other flagship devices.

The battery on Nexus device is not that great, companies like Samsung, Sony and HTC have optimised battery life with their custom UI and battery optimizations or at least providing bigger battery. That is not the case with Nexus 4, Android JellyBean is better than previous generation of androids but still the processor and GPU drains a lot of battery, you will need to tweak the CPU to use less power which can easily be done with rooting.

LG nexus 4 doesn’t have micro SD card slot, so if you carry all your media library with you, better consider any other option. The phone has glass coated panel and hence it’s slippery on most of the surfaces.

LG nexus 4 does heat up quickly and users have complained that back glass panel gets visible cracks due to over heating after a few months. India is warm country with average 35-45 degree Celsius in summer, the device will suffer too much heating and thermal throttling. Thermal throttling actually slows down the CPU and GPU when temperature of the phone starts rising. This leads to performance reduction and in India Nexus 4 will heat up fast. 60 degree Celsius is the threshold of the phone and it shuts down when temperature crosses 60 degree Celsius to protect battery.

But if you can compromise on these things Nexus 4 is the best smartphone at 26K INR.