Skip to content
Home Mobile JioPhone 2 vs JioPhone: Why It’s Not A Big Upgrade

The JioPhone 2 was launched as a successor to the JioPhone, the first smart feature phone from Reliance Jio last month. The aim is the same – bring Internet to the masses, but this time around there’s a change in the form factor, among other improvements.

Well, the JioPhone 2 (Rs 2,999) changes things up on the design and aesthetic front with a horizontal display and QWERTY keyboard, but is that enough to call this an upgrade? I have used the JioPhone in the past and have been using the JioPhone 2 for the past month. Here’s why I feel that the new model is not a big upgrade:

While there are obvious differences in the design of both the JioPhone and JioPhone 2, they sport a similar plastic build, with a matte finish to the body. 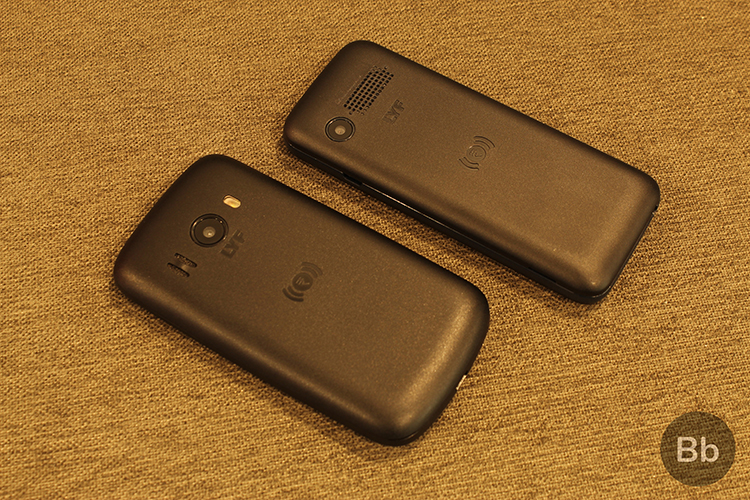 The JioPhone sports a sleek candy bar design with a T9 keypad (that requires you to tap each key multiple times to input characters or numbers) whereas the JioPhone 2 replaces the same with a full-sized physical QWERTY keyboard. This makes the latter shorter and a little wide but the device is still quite compact and handy. 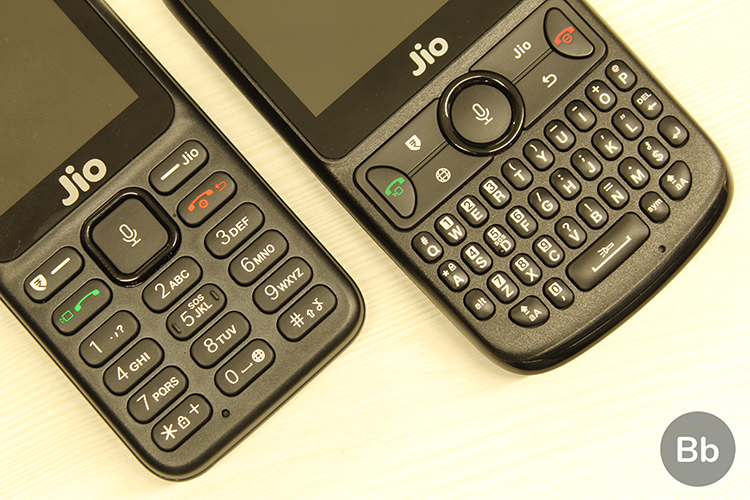 Even though both of the devices are quite chunky, they have an equally good in-hand feel and are comfortable to use for prolonged periods. You will, however, have to get used to the T9 and QWERTY keyboard after typing on glass, if coming from smartphones.

You get exactly the same ports, i.e. microUSB and 3.5mm headphone jack, on both of these devices but the JioPhone 2 brings along storage expansion up to 128GB using a microSD card.

Reliance Jio has played it smart here and both the JioPhones essentially include the same display, except for its placement on the device. Both of them feature a 2.4-inch QVGA TFT display, with a screen resolution of 240×320 pixels on the original JioPhone and 320×240 pixels on the JioPhone 2. 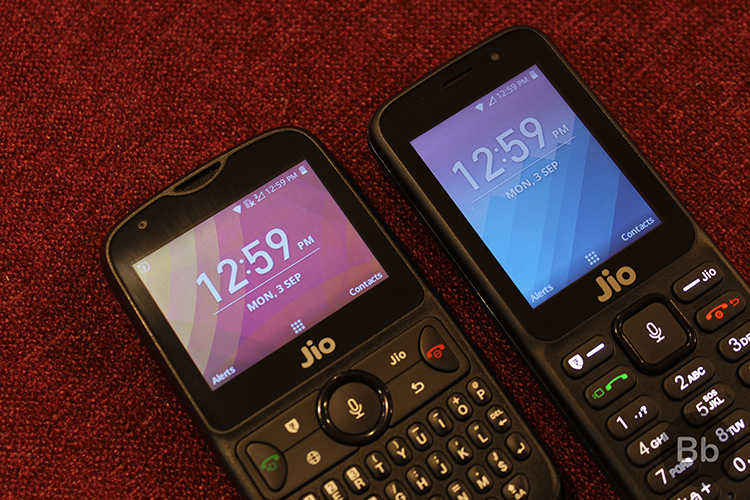 The screens on both devices are usable and get bright enough, even in broad daylight, however, I think Reliance Jio has cut some corners with the JioPhone 2. The screen on JioPhone looks better and has superior color reproduction when compared to its successor, so that would be my pick. 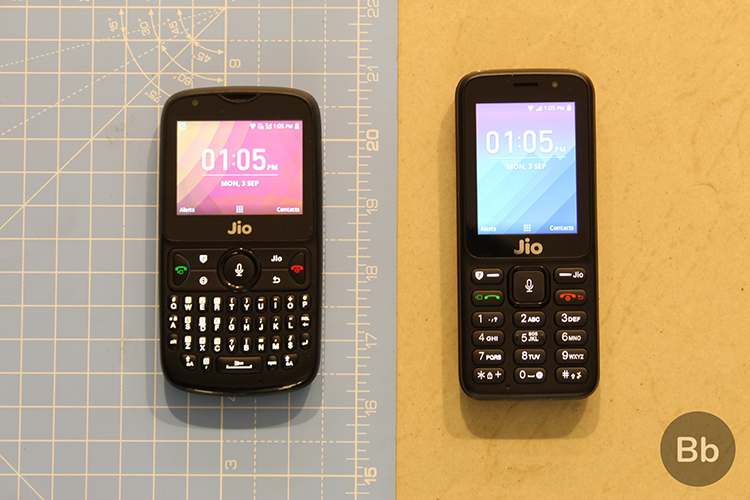 While the specs may look decent for a feature phone, the performance of the phones is not too great. You can easily browse the web with Jio’s 4G LTE network but the sluggish animations and slow user experience can turn off smartphone users.

The silver lining is that first-time phone adopters, especially those who will be introduced to the Internet with the JioPhone won’t notice any issues.

Coming to software, both JioPhone devices are powered by KaiOS, which is quite feature-rich and offers a likable UI. It comes packed with a myriad of smart features, including several Jio apps and Google Assistant. 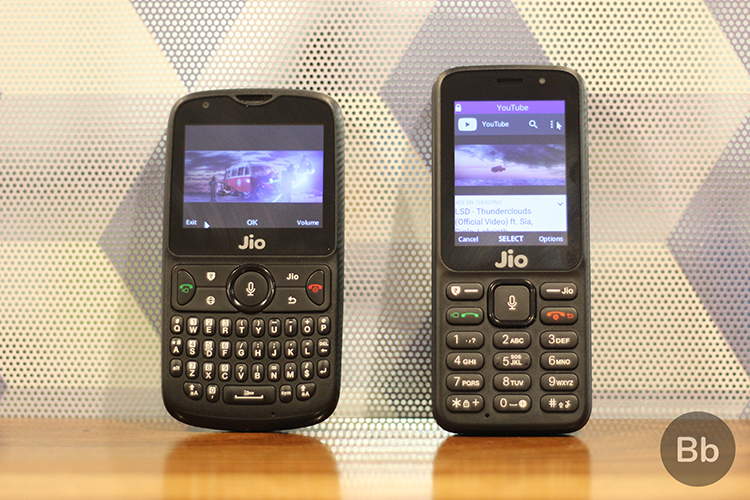 However, it is truly difficult to accept either of the JioPhone devices a daily driver because of the lack of some of the most popular apps like WhatsApp or YouTube. Facebook and Google Maps have found their way to KaiOS but they aren’t enough to demand the attention of users.

And yet again, the 2-MP rear camera and 0.3-MP selfie shooter on the JioPhone 2 are the same as its predecessor. The photo quality is acceptable for a smart feature phone and would be enough to capture memories or send to friends via WhatsApp (if and when it launches on KaiOS). 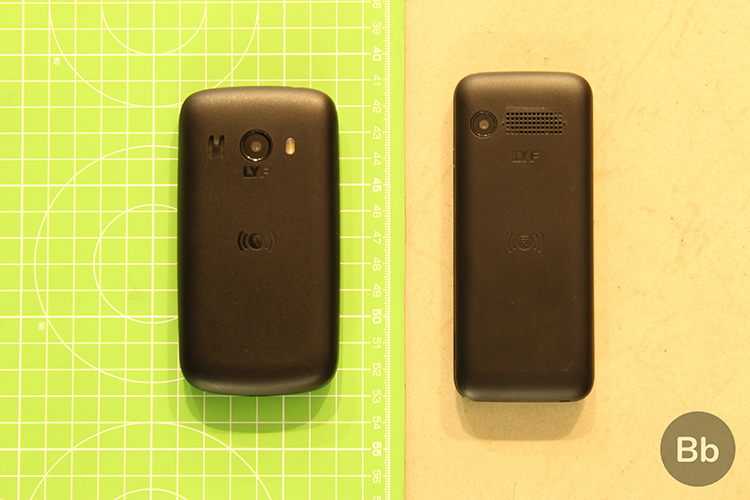 You wouldn’t exactly be able to see the details in these photos and they’re full of noise, especially in low-light conditions. The tiny screen wouldn’t show much detail anyway but transferring the photos over to a PC via Bluetooth can actually help you judge the quality. We doubt anyone would be doing this though. You can check out some of the camera samples in out JioPhone 2 hands-on right here.

Both the JioPhone and JioPhone 2 sport a decently-sized 2,000 mAh battery that can easily last the whole day on low to medium usage. However, I noticed that browsing, watching YouTube, and camera usage depletes the battery fast and the phone dies within hours.

To recap everything for you, here’s a quick rundown of the key specs of the two JioPhone devices:

JioPhone 2 vs JioPhone: Why It’s Not A Big Upgrade?

There’s no denying the fact that JioPhone has improved the availability of 4G and boosted its adoption across India, making Internet available to the masses. The JioPhone 2 will only further contribute to this mission, however, you can clearly see that the upgrade isn’t massive when compared to the JioPhone.

The only prominent difference between the two JioPhone devices is in the form factor, without any change in functionality. The unavailability of popular social and messaging apps on both devices, especially the upgraded JioPhone 2, is disappointing and makes Android Go phones (just a little more expensive) more appealing.

What is your opinion on the JioPhone 2? Let us know in the comments below.