Reliance Industries announced the successor to its first-ever smart feature phone, the JioPhone 2, earlier in July to further fuel the reach of 4G connectivity among users across the nation. The device landed in the Beebom office earlier this week, post its first flash sale, and it seems like a worthy upgrade over the original JioPhone.

The JioPhone 2 (Rs. 2,999) doesn’t stick with the candy bar design of its predecessor but instead, brings along a new experience to the users. It boasts of a horizontal-viewing screen (from the good ol’ days), a full-sized QWERTY keyboard, Jio Apps, and a lot more. I moved my primary Jio SIM to the JioPhone 2 for a few hours and here’s my initial experience with the device:

The JioPhone 2 comes packed in a tiny sea blue colored box, with the Jio branding on the front and a feature rundown on the back. Listed below are the contents of the box: 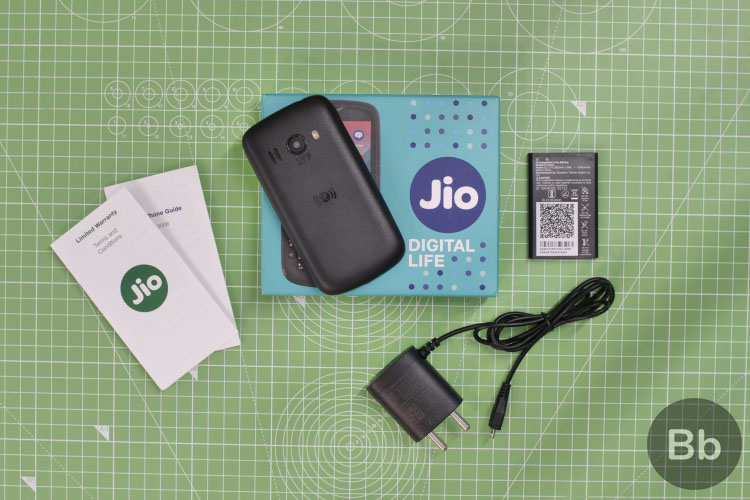 Before we take a deep dive and talk about the JioPhone 2, here’s a quick look at the specs of the device:

As far as I remember, the JioPhone 2 appeared bigger in promotional images. But when I first took a peek at the device, it turned out to be this compact and tiny thing that does not have much heft to it. It can easily fit into the palm of your hand but is really thick. I mean, it is a chunky device, for sure.

The JioPhone 2 has a plastic build, littered with keys and the horizontal screen on the front to a matte finish on the back. It makes the device easy to grip and not slip away from the hand, especially while typing (which can still be done using just one hand on this device).

Further, the device sports a 2.4-inch horizontal QVGA display with a 320x240p screen resolution. It isn’t the best screen you would find on the market on a feature phone, but it can get sufficiently bright and attempt to hold its own in broad daylight.

The only thing I’d not trust the JioPhone 2’s screen with is the image quality, which looks rubbish on this tiny screen but it actually isn’t that bad (more on this later). Having said that, this is a phone aimed at people who will be buying their first phone, so the display here is decent enough for the price. 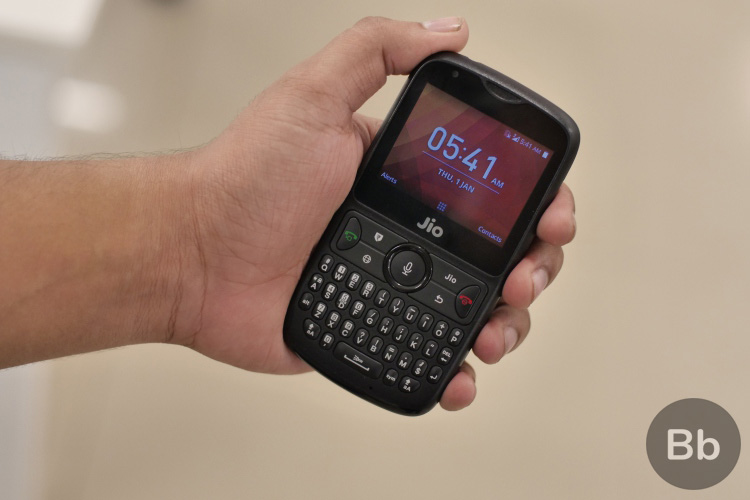 Yes, let’s talk about typing. The USP of the JioPhone 2 is its QWERTY keyboard that replaces the clunky T9 keypad on its predecessor. Even though the keys are really small, they are well spread out and tactile, such that you will be reminded of the old Blackberry days.

It will obviously take you time to get used to the physical keyboard since we all have gotten so used to slapping our fingers on a glass slab. 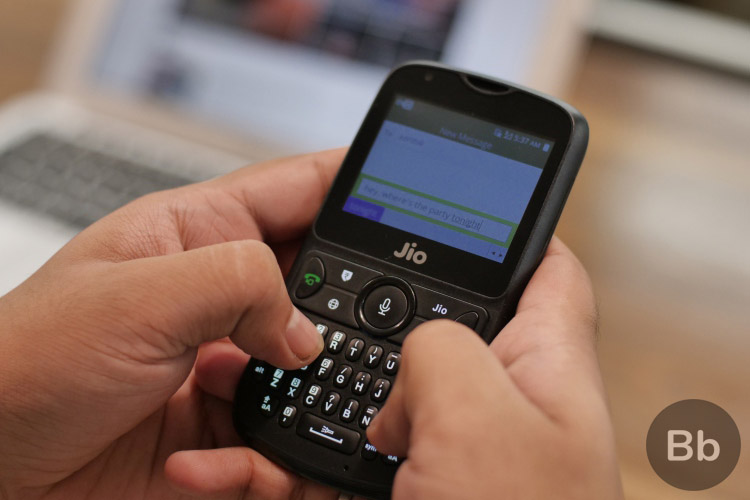 As you can see above, there’s a spread of buttons above the keyboard as well. Apart from the traditional call accept/reject keys, you get a dedicated Google Assistant key at the center. There are also shortcuts to access notifications, MyJio app or the camera from the navigation D-PAD.

You can long-press the round microphone button to ask queries and get answers, perform tasks such as turning on Bluetooth or sending texts.

The JioPhone 2 has no power or volume buttons on the sides, umm, feature phone. There’s a 3.5mm headphone jack at the top and a microUSB charging port at the bottom.

Just like the original JioPhone, this smart feature phone is powered by KaiOS (just an updated v2.5 build) and it’s really feature-packed. It renders you access to a lot of features you’d only expect to see in a smartphone, such as a notification center, location services, privacy options, and other useful settings. 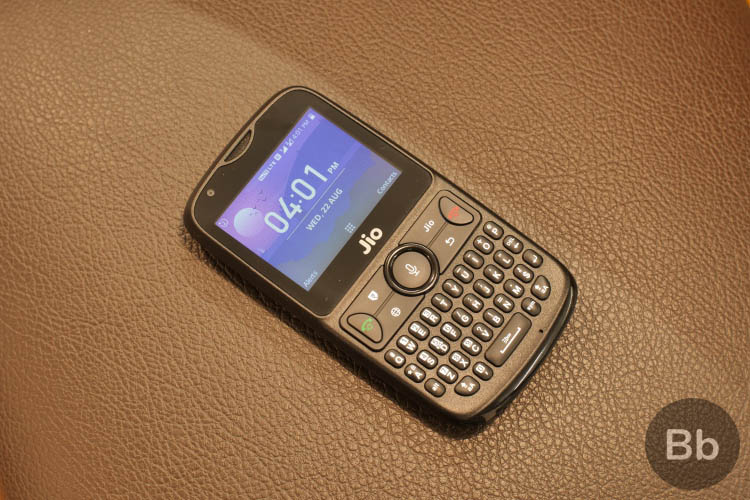 The device comes pre-installed with a plethora of Jio apps, including Jio TV, Jio Video Chat, and many others, along with Facebook to help you keep tabs on your social life. The primary asset of KaiOS will, however, have to be the Google Assistant integration that will make it easier for a lot of people to find their way around the device.

Just like the original JioPhone, this device also comes with NFC and JioPay, which makes it possible for you to pay for goods at the supermarket using just your phone. 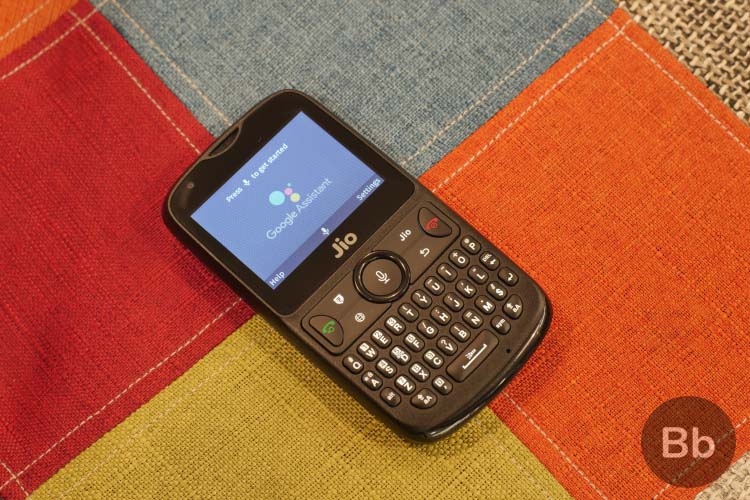 There’s also a Jio AppStore available on the device, so you can choose to install apps such as Google Maps, Hotstar, BookMyShow, and the Narendra Modi (NM) app among others.

First, let’s get the specs out of the way, the JioPhone 2 is powered by a 1GHz dual-core chipset, paired with 512MB of RAM and 4GB of internal storage. You also get a dedicated microSD card slot to expand the storage up to 128GB.

These sound like decent specs for a feature phone, however, the user experience does have some issues. I mean, the device works okay-decently well but feels slow due to sluggish animations, as well as unnecessary splash screens that show up on opening each app.

For example, I had to wait 3-5 seconds after dialing the number to see the calling screen. It’s not a big deal really for a phone that costs so low but the user experience could have been better.  The call quality was good and I didn’t face any hiccups there.

I was mostly happy with the 4G Internet speeds though since the apps installed quickly, the websites loaded fine, and I even tried booking cabs from the browser (more on that very soon, so stay tuned). 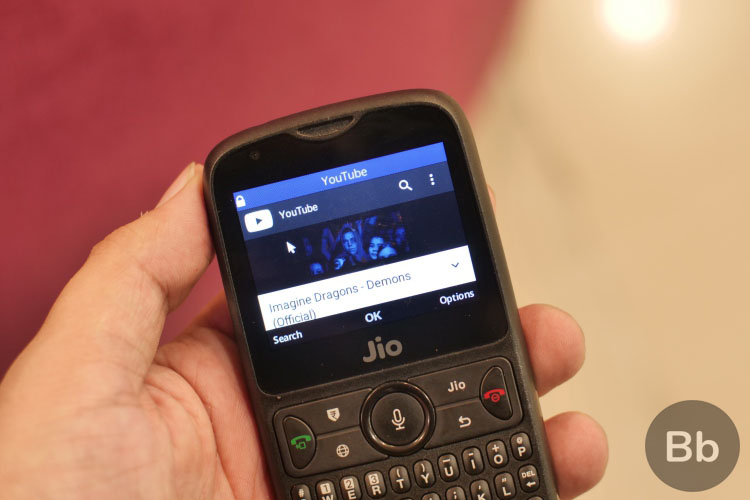 There’s also a massive 2,000mAh removable battery pack stuffed into the JioPhone 2, but my experience has been okay-ish in the few hours I spent with the device. The battery seems to run out pretty quick if you keep using the device but ya, I will be testing the phone more extensively to get a better idea.  The charging is also slow due to no fast-charging support – which we obviously shouldn’t expect.

Coming to the optics, the JioPhone 2 features a 2MP rear camera and 0.3MP front camera, which the device has carried forward from its predecessor. The photos clicked using this setup is okay-ish for what you’re getting in the package. 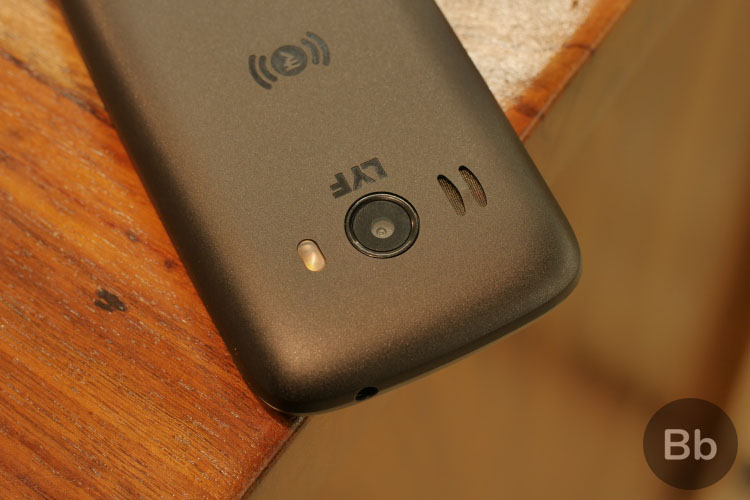 In the photos that I had captured, you won’t be able to discern any details and the photos are full of noise in most situations, especially in low light, but you can transfer them to your smartphone or PC to share on social media.

I’d say that the cameras on the JioPhone 2 are decent enough to capture memories, share selfies on WhatsApp or make video calls via JioChat app. Do not expect any high-quality results from it, here check out some of the camera samples we captured in different light conditions:

SEE ALSO: Here’s a First Look at WhatsApp & YouTube in Action on JioPhone

The JioPhone 2, from my brief time spent with it, appears to be a great successor to the first smart feature phone from Reliance Jio. It is a device aimed at people who will be buying their first phone and for them, the JioPhone 2 seems like a great “smart” feature phone.


I think the JioPhone 2 has a lot going in its favor, with a horizontal screen and QWERTY keypad being its key selling points. They will certainly attract new, as well as nostalgic users, and be cherished for its intuitive experience at an affordable price. So, are you looking forward to buying the JioPhone 2? Let us know your thoughts in the comments below.