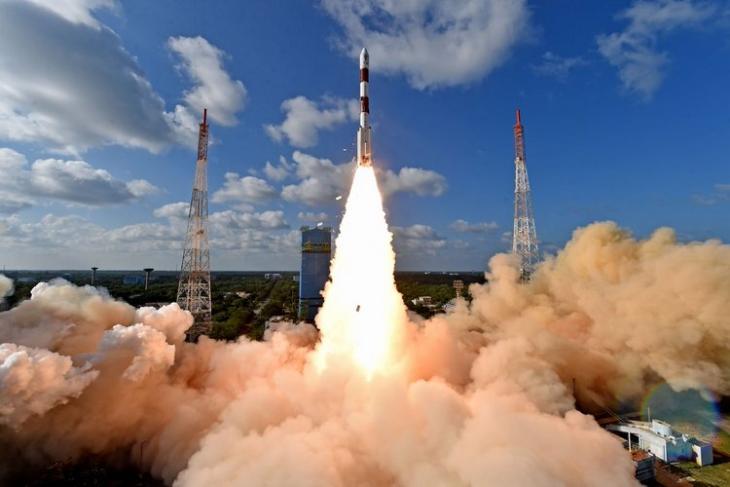 Declaring this will be ISRO’s last rocket mission in 2019, its chief K. Sivan said in 2020, we will witness the maiden launch mission of ISRO’s new rocket Small Satellite Launch Vehicle (SSLV) and other rockets.

India’s latest radar imaging earth observation satellite RISAT-2BR1, now up in the sky, will send sharp clarity images for surveillance, agriculture, forestry and disaster management. The satellite camera can look through clouds and take pictures. The Indian space agency officials said they would supply the required images for various agencies. It’s for the user agency to decide on how to use these images. One more such satellite RISAT-2BR2 will soon be launched by ISRO.

“I am extremely happy to declare that 50th PSLV rocket had injected the RISAT-2BR1 and nine customer satellites into precise orbit”, the ISRO Chairman said post launch. “Alongwith the 50th mission of PSLV rocket, the mission marks another milestone for ISRO. This is the 75th rocket launch from Sriharikota”, Sivan said in an official statement.

Today’s launch was the 50th launch of #PSLV & 75th launch from our space port in Sriharikota.

Thanks for your support. pic.twitter.com/n7wDJyiGCN

At about 3.25 p.m, the rocket Polar Satellite Launch Vehicle-QL (PSLV-QL) standing around 44.4 meters tall hurtled itself towards the skies ferrying 10 satellites. With the fierce orange flame at its tail brightening up the evening skies, the rocket slowly gathered speed and went up and up enthralling the people at the rocket port while the rocket’s engine noise like a rolling thunder adding to the thrill.

Guiding the rocket was the Vikram Processor-1601 designed by Vikram Sarabhai Space Centre (VSSC) and realized by the Chandigarh based Semi-Conductor Laboratory coming under Department of Space. The Vikram Processor is used for the rocket’s navigation, guidance and control and also for general processing applications.

Just over 16 minutes into its flight, the rocket first slung RISAT-2BR1 and a minute later the first of the nine customer satellites was ejected. The launch mission concluded in about 21 minutes when the last of the customer satellites were put into orbit. With this successful mission, ISRO has put into orbit 319 foreign satellites. The PSLV-QL is a four-stage/engine expendable rocket powered by solid and liquid fuels alternatively. The rocket has four strap-on booster motors to give additional thrust during the initial flight stages.