Skip to content
Home What is IPv4 vs IPv6: The Future Of Internet Protocols

Every internet user these days must have come across the terms IPv4 and IPv6. You might have heard people say that IPv6 is better than IPv4 and it is the future. But what exactly do the terms IPv4 and IPv6 stand for, and what is it that makes the latter one superior? If you’re baffled by the same questions, well then read on, as we discuss IPv4 vs IPv6, and take a better look at the world of Internet Protocols. But first, let us discuss what are Internet Protocols.

The Internet Protocol or IP is the main communications protocol in the field of Internet protocol suite for relaying datagrams across network boundaries. The Internet Protocol has a routing function that enables inter-networking between various devices across the globe, and effectively, establishes the network that we call the internet. The IP is responsible for addressing hosts, encapsulating data into datagrams, and routing datagrams from a source host to a destination host across one or more IP networks. In Lehman terms, IP contains the set of rules and guidelines that need to be followed while transmitting any data over any network spectrum.

Internet Protocol Version 4 (IPv4) is the fourth-version of the Internet Protocol (IP). It was initially deployed for production in the ARPANET in 1983 and has since then grown to route most of the Internet traffic today. IPv4 is a connectionless protocol which is implemented on networks that make use of packet switching. It operates on the best effort delivery model, meaning that they obtain unspecified variable bit rate and delivery time, depending on the current traffic load. It does not guarantee delivery, nor does it assure proper sequencing or avoidance of duplicate delivery.

Internet Protocol Version 6 (IPv6) is the most recent version of Internet Protocol and the incremental update to IPv4. Essentially, IPv6 is an Internet Layer protocol for packet-switched internetworking and provides end-to-end datagram transmission across multiple IP networks, closely adhering to the design principles developed in the previous version of the protocol. IPv6 was first formally described in the Internet standard document RFC 2460, published in December 1998, but has started coming into existence on devices since late 2006.

Why The Need For IPv6?

IPv4 uses just 32 bits for its Internet addresses. What this essentially means is that IPv4 can support up to 2^32 IP addresses in total, which accounts to 4,294,967,296 (4.29 billion). While this does seem to be a big number, the estimated number of devices that connect to the internet exceed 20 billion, and the number seems to be growing day by day. As such, the IP address for any device needs to be specific and unique, and with the growing number of users, we are running out of IPv4 addresses.

The IPv6, along with increasing the number of addresses available, does come along with furthermore added benefits. With the help of IPv6, the need for Network Address Translation (NAT) has been eradicated, which was previously used to conserve global address space allocations due to the lack of IPv4 addresses. Additionally, the IPv6 also removes the possibility of private address collisions, along with better multicast routing. 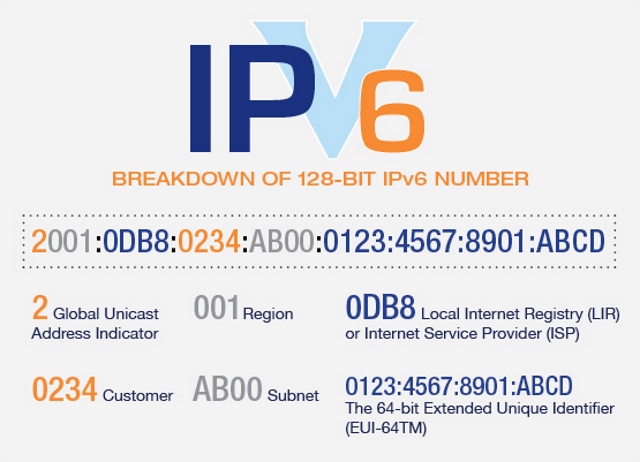 As compared to the IPv4 standards, IPv6 has a simpler header format, which allows for simpler and more efficient routing. It also brings about an increase in the Quality of Service (QoS), also referred to as “flow labeling”. Not to forget, the IPv6 has its own built-in authentication and privacy support and has flexible options with support for extensions. Overall, the IPv6 provides easier administration as well, bidding farewell to Dynamic Host Configuration Protocol (DHCP).

IPv4 to IPv6: The Switch

The depletion of IPv4 had been predicted years ago. In 1993, Classless Inter-Domain Routing (CIDR) was introduced, which was later replaced with the extensive use of Network Address Translation (NAT). While both the methods worked, they were nothing but temporary means to delay the IPv4 address exhaustion. Essentially, the switch to IPv6 is necessary, but the progress has been slow. To make the switch, software and routers require changes to support the more advanced network, which will take time and money.

As of 2014, IPv4 still carried more than 99% of worldwide Internet traffic. Despite a decade long development and implementation history as a Standards Track protocol, general worldwide deployment of IPv6 is increasing slowly.  As of 22 July 2017, the percentage of users reaching Google services with IPv6 reached 20.1% for the first time, growing at about 7.2% per year, although varying widely by region. While devices are adopting the IPv6 standards, the number of network providers switching to IPv6 is still quite low. In the meantime, IPv4 and IPv6 effectively run as parallel networks, though exchanging data between these protocols requires special gateways.

SEE ALSO: What is Dark Web and How to Access it?

IPv4 vs IPv6: The Inevitable Change

The lack of IPv4 addresses is here, but thankfully, we have the IPv6. With 2^32 addresses (I am not going to quote the exact number again), the IPv6 standard should easily stand the test of time. All the latest devices come with IPv6 as their standard, and even if you haven’t noticed it, chances are that you’ve already made the switch to IPv6. The switch to IPv6 is necessary and inevitable, one that you are bound to make soon. Or, to be honest, considering that the devices around you as well as your ISP have already switched to it, you too will make the switch.

So that’s all there is to the discussion of IPv4 vs IPv6. Tell us your thoughts on the next big thing in the world of Internet Protocol in the comments section below.

How to Disable IPv6 on Windows 10 PC