Even while other Smartphone manufacturers are trying their best to include a higher-sized battery inside device, it is clear that Apple Inc is way too stubborn in that matter, at least in the case of iPhone. And, if you have bought iPhone 6s, one of the disappointing factors would be the low battery capacity, making it hard for all-day usage. iPhone 6s is having a battery of 1715mAh, which is in terms of size pathetic. Of course, you cannot always carry your power bank, especially during office or routine stuff. If you can handle some more weight, you’ve another option — battery cases for iPhone 6s

Battery Cases are protective cases that come with in-built battery. Using that battery, you can charge your iPhone 6s. And, as they are protective cases, you can get rid of various issues such as bumps, shocks, dust, water, dirt etc. Most battery cases has a capacity of more than 2000mAh, thus giving you enough time for browsing, talking and gaming if you prefer that. In this post, we have listed out top 12 iPhone 6s battery cases you can go for. Although it may vary, use of a battery case would increase weight of the device — be prepared for that, too. 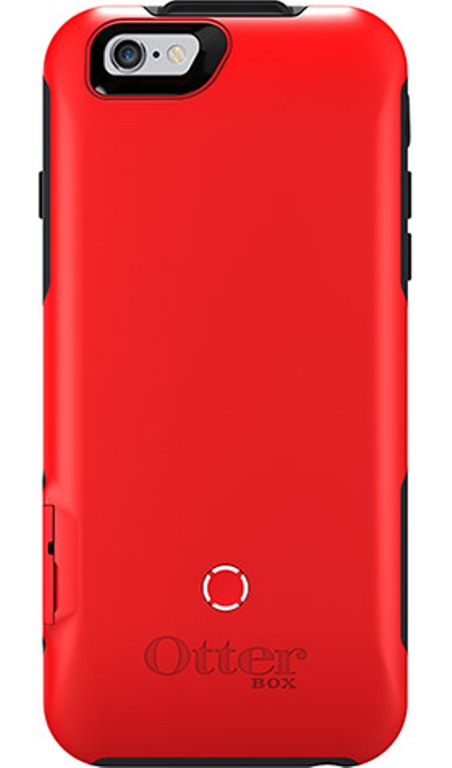 This battery case from OtterBox — a name that’s trustworthy when it comes to sturdy protective cases — is a superb choice when you need enhanced battery backup and good protection. It comes with a 2600mAh battery, thus letting you use your iPhone 6s, all the day, and perhaps more than that. The battery has a charge status LED and auto-stop charging feature, both of which are useful in the long run. OtterBox Resurgence iPhone 6s Power Case uses a Quick Charging technology, which is quicker compared to standard charging options out there. You can charge the external battery using its included micro-USB cable. This case is available in four colour variants — Black, Glacier, Cardinal and Mint Ice. Being a product from OtterBox, you can trust the offered military grade protection. 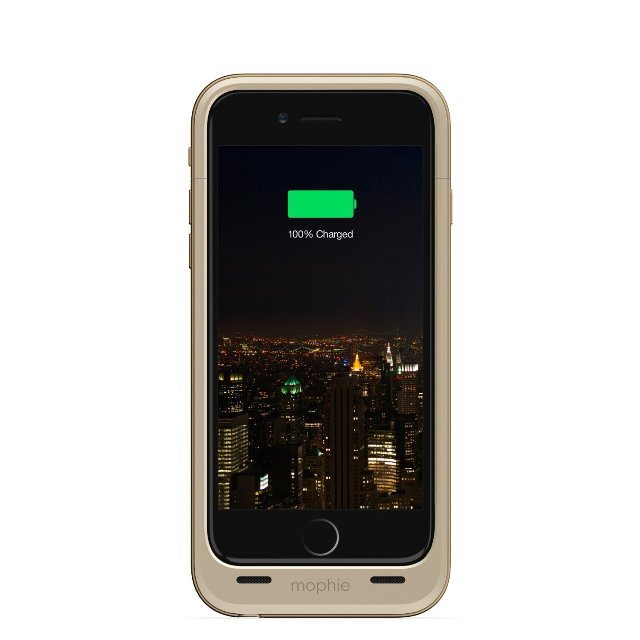 With a battery that has capacity of 3300mAh, Mophie Juice Pack Plus for iPhone 6s can be the best choice for iPhone 6s users who talk or browse a lot. The pack claims to give you 17 hours of additional talk time, 12 hours of additional browsing and 60 hours of music playback. In short, you can have more than 120% extra battery in the long run. As it comes to the case of protection, there are three layers and the internal bumpers and optimized edges would be just fine. Mophie Juice Pack Plus for iPhone 6s uses Impact-Isolation system for the case design. In addition, the battery is powered by pass-through charging technology;, your iPhone 6s would be recharged first and then the battery pack. It’s available in Black, White and Gold variants. 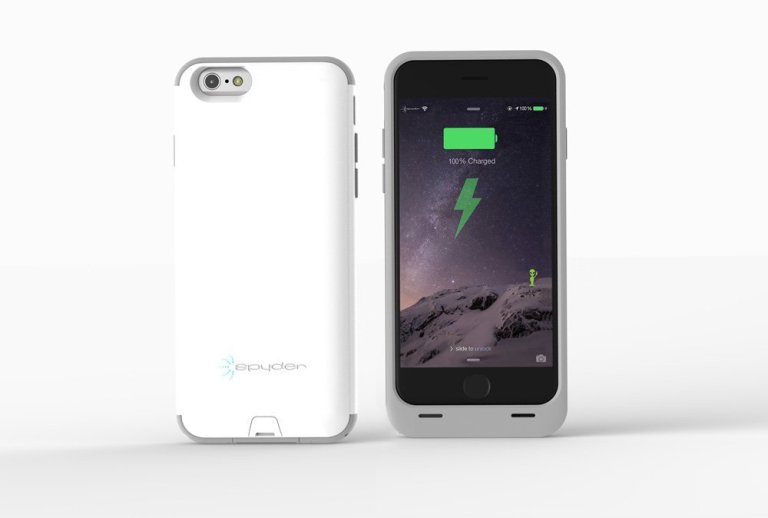 Spyder PowerShadow Ultra Thin iPhone 6s Battery Case is resistant towards shocks, water, dust and microbial issues. One of the thinnest battery cases for iPhone 6s, it doesn’t add much bulk either. When you add 2750mAh external battery to the in-built 1715mAh, you get a higher battery capacity, with enough talk time and web browsing. Spyder Digital Research has made the design unique and it is easy to manage as well. For instance, its battery level indicator, on-off switch and USB port etc can be accessed easily, with no issues whatsoever. There’s a charging dock that you’d be able to purchase additionally and it gives you the freedom of Drop n’ Go charging, when you reach home. When it is placed on dock, it will synchronize your data as well. 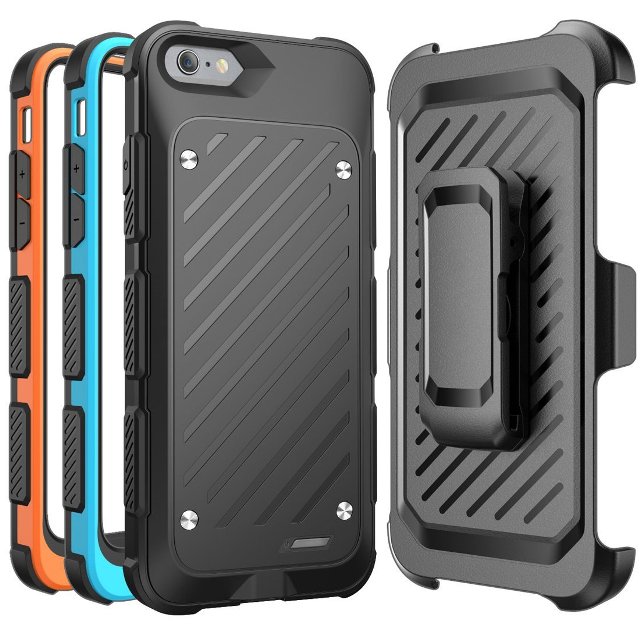 This battery case from SUPCASE has a rugged design and comes with a holster for easier connection, especially when you are moving. The MFI Certified power case has a battery capacity of 3200mAh, which would serve the purpose of external battery requirement of the device. It also has a LED Colour-based power indicator, in which various colours will indicate different levels. Other features of SUPCASE Beetle Power iPhone 6s Battery Case include the dedicated bumper for drop protection and the belt clip holster. In addition, you get three interchangeable bumpers — orange, black and blue — that you can use according to your style. There’s a USB Cable for used for charging both the phone and battery case, along with data syncing. Considering the price, it’s one of the best iPhone 6s battery cases you can get. 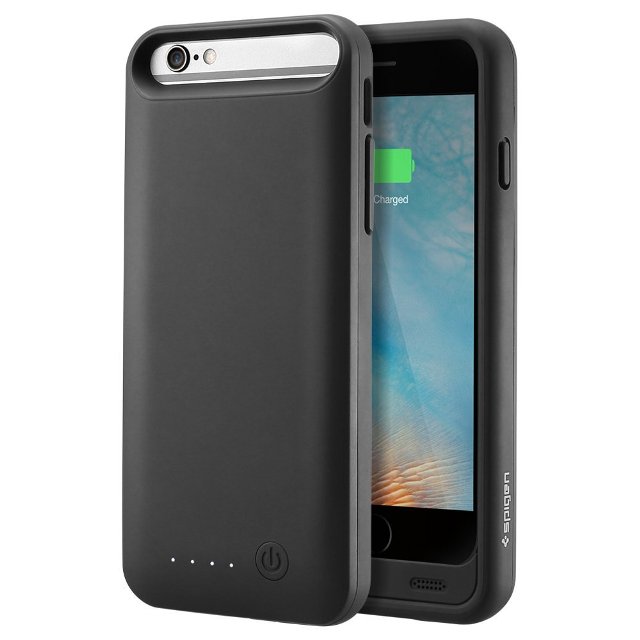 Offering you an extra 17 hours of talk time, 13 hours of video playback and standby time of 288 hours, this is a great iPhone 6s battery case from Spigen. The entire design of protective case is good to go. On the back portion, there is a LED-based signal indicator, which can indicate the level on 25% increments. There’s a single power button to enable the charging. Spigen Volt Pack iPhone 6s Battery Case has a truly slim structure, and even when you have put iPhone 6s inside, the whole thickness would be 15.0mm. Talking of protection, Spigen has made use of double structure; its frame and case can be detached, and the installation would be easier than you’d expect. Nevertheless, one problem of the case is that you’ve to remove the case for data syncing. 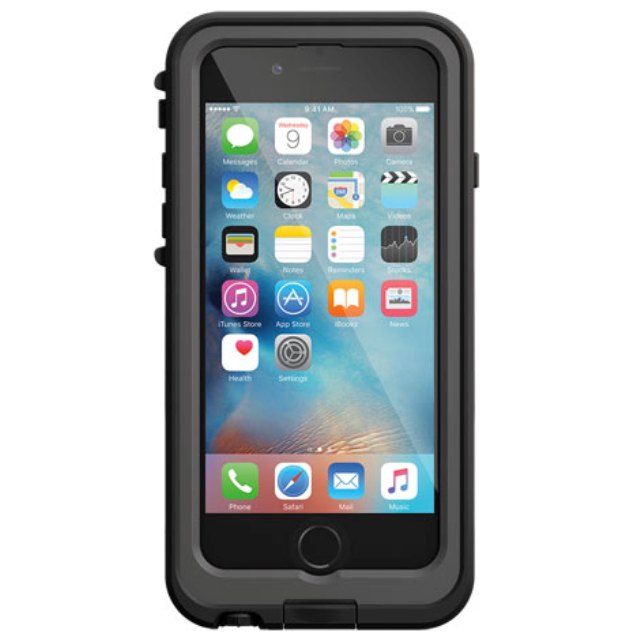 FRE Power for iPhone 6s Case is a stunning product from Lifeproof, which can protect the device from almost every kind of obstacle such as water, dust, snow, dirt etc. It’s a truly expensive iPhone 6s case but the price is worth your effort if you’re a rough iPhone user. As we come to the case of recharging, there is a 2600mAh battery, for providing 2x battery life for the whole usage. In addition, the case packs auto-stop charging feature and the Rapid Recharging technology, thanks to the in-built circuitry. In short, you can get iPhone 6s charged instantaneously, as you wish. The case is available in Blacktop, Base Jump Blue and Avalanche colour variants, and is made of stronger materials. 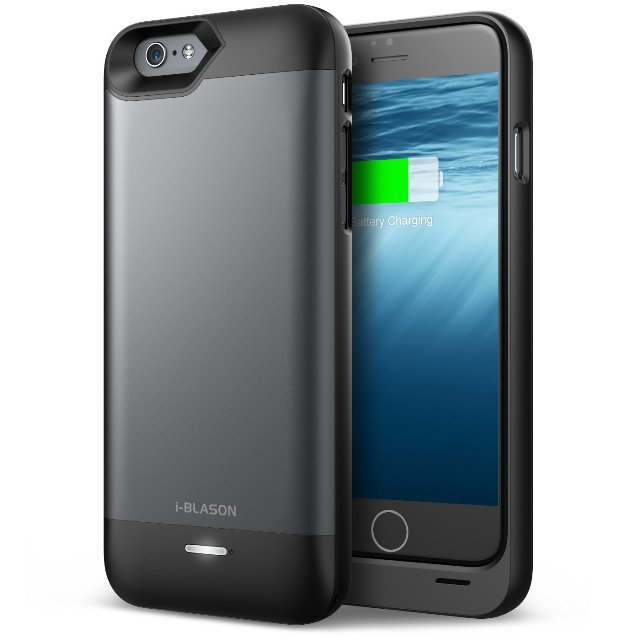 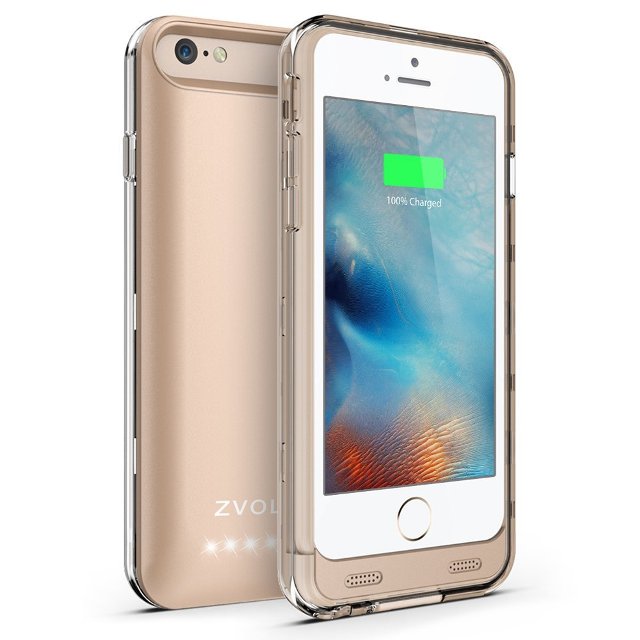 ZVOLTZ ZT6 Series iPhone 6s Battery Case is yet another affordable iPhone 6s battery case you can buy and the case is all set to give you satisfactory protection from scratches, daily wear and tear, scrapes etc. along the perfect cut-out for all the accessories, ZVOLTZ ZT6 Series iPhone 6s Battery Case has an LED Indicator to let you know the status of remaining battery. The case comes with sync-through technology. It means that you would be able to charge iPhone and sync data, without removing the case. Of course, its 3100mAh battery would be just awesome to give you extra talk time and browsing time, all the way. In addition, it has a compact build too. 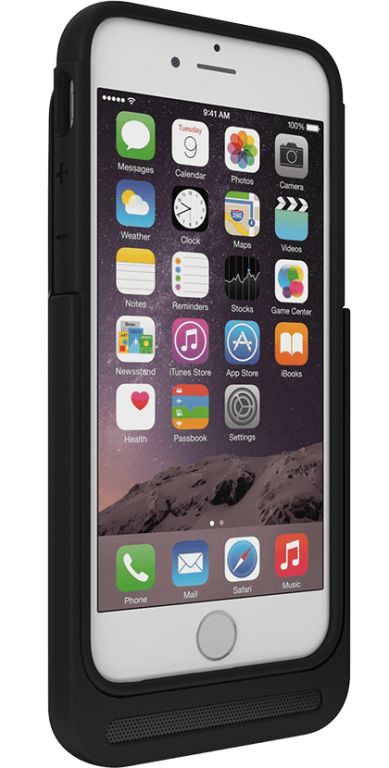 Prong PWR Case for iPhone 6s comes with a multitude of features; these features can be quite practical in the long run, for the busy iPhone 6s user out there. The case is a combination of a battery, integrated wall charger! When you are at home and want to charge the external battery, you can just take out the integrated charging prongs to plug it into the wall socket. After that, you can use the external battery to power your iPhone 6s. The device has a 2600mAh battery but users say that it can give you a 0%-100% charge, only once, with no charge left to use. However, there’s a 4-LED indicator to know the remnant amount of charge. Thus, if you prefer a battery case that doesn’t have wires or cords to mess up with, you can go for Prong PWR Case for iPhone 6s. it’s a bit more expensive, by the way. It’s available in Blue/Grey, Slate, Red & White and Translucent colour variants. 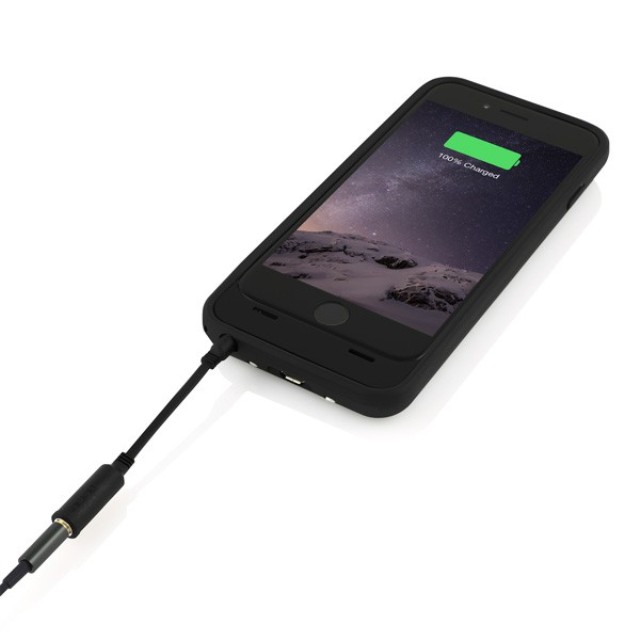 If you want to bring wireless charging to your iPhone 6s, while ensuring support of an external power source, you’ve to have a look at this product. Let’s first talk about the battery. It has an internal battery of 2100mAh, which will be able to give you enough backup for all-day use. So, that’s what we can expect from a typical iPhone 6s battery case. On the other hand, to charge Incipio Ghost Qi Wireless Charging Battery Case, you have to place it on top of a Qi-enabled charging pad. The best part is that you can charge both the case battery and your iPhone 6s battery using a wireless charging pad. Talking of protective case, the Co-Mold design is impressive, we would say. Only one colour is available — Brushed Black. 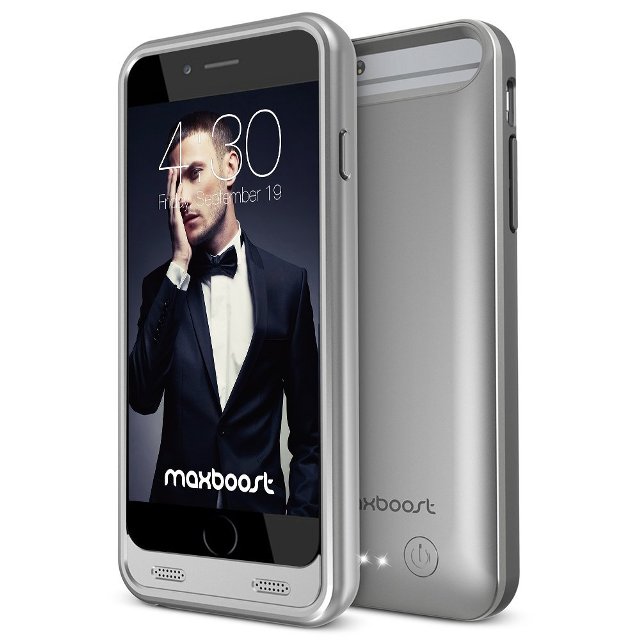 Available at a reasonable price, Maxboost VIVID iPhone 6s Battery Case can act as an impressive backup solution for your iPhone 6s. While its protective bumper and related protective features make it an awesome case, its 3100mAh battery would be just awesome, not to mention the associated features. For instance, there’s a sync-through option, which lets you charge both the battery case and phone through a single cable. We think it’s awesome from usability point of view. Maxboost VIVID iPhone 6s Battery Case has also given importance to the design; for instance, there’s a LED indicator for knowing how much juice is left in the backup battery and the single-button interface makes things easier. When we add the lifetime warranty into account, it’s Christmas. 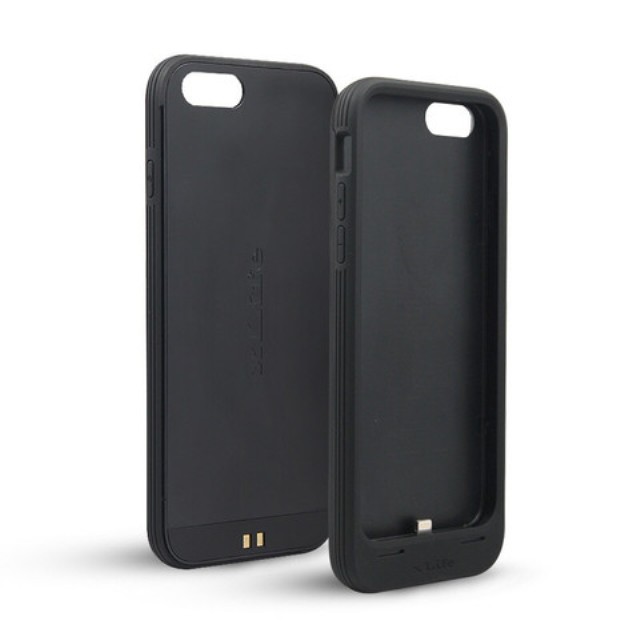 Actually made for iPhone 6, the case would work fine with iPhone 6s as well. In short, xLife Direct iPhone Wireless iPhone 6s Battery Case is an external power source, which you can charge using Qi wireless charging technology. So, we were saying, if you have a wireless charging pad with you, you can place the iPhone 6s on top of it to charge, not only the external battery but also your iPhone 6s internal battery. Thus, you can get rid of a lot of wires using it. It has a LED-based indicator to let you know the remaining charge and a good build for easier handling. The battery is of 3000mAh, which is more than satisfactory for an active user. Altogether, xLife Direct iPhone Wireless iPhone 6s Battery Case is a good-to-go deal, we bet.

Well, which is your favourite iPhone 6s battery case in the list? We are happy to hear from you.