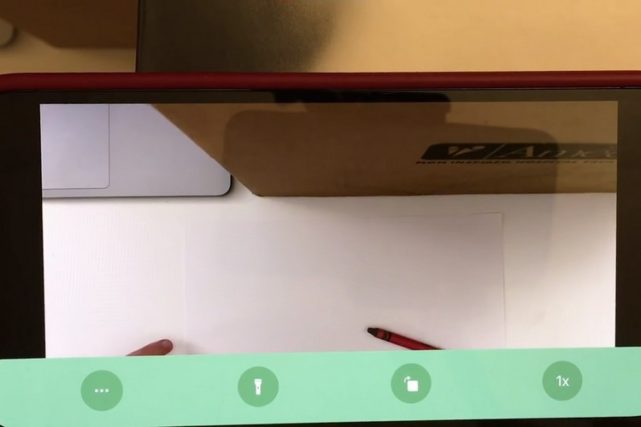 The COVID-19 pandemic, as we all know, has forced teachers and students to adapt to virtual learning via video conferencing apps like Zoom or Google Meet. So, if you are a teacher, taking classes from home, and have been struggling to share documents, reports, or books with your students due to the lack of an overhead document scanner, there’s now an app for that.

“Overviewer” is a new iOS app that lets teachers or anyone for that matter, use their iPhones as an overhead document scanner. It is developed by a “dorky husband” (not this one, though) of a kindergarten teacher to help his wife share documents and other kinds of manuscripts with her students on video conferencing apps easily using her iPhone’s camera(s).

Charlie Chapman (@_chuckyc), a software developer, saw his wife struggling to share documents and books with her students as she continued teaching from home. So, in order to help her use her iPhone’s camera in a better way, Chapman developed the Overviewer app. He recently shared a sweet blog post about the story behind the app.

An App for Virtual Teachers

Now, this app is a simple alternative to overhead document scanners that lets teachers “project or stream a top-down video of anything the presenter wants to physically show on their desk”. It uses the screen-sharing option of video conferencing apps and lets teachers stream a top-down video of a document or a book using the iPhone’s back camera(s).

You can connect your iPhone to a Mac via a lightning cable and use the app to share the feed from your phone’s camera. Now, it was already possible with the iPhone’s default camera app. However, as Chapman notes, there were two major issues with it – a cluttered UI with a “bunch of buttons” and the lack of horizontal view, “which means huge black bars on each side of the zoom call”.

So, the Overviewer app eliminates these issues by providing a clean UI and dedicated buttons to rotate a video-stream sideways. The app also has buttons to turn on/off the phone’s flash and change lenses during a Zoom call session.

The developer also shared an in-depth tutorial video on how to use the app with your Mac. You can check it out right below.

Now, Chapman says that the app is “tailor made” specifically for his wife’s use case. However, he published the app on the App Store anyway to help other teachers in similar situations use it to their advantage.

Overviewer is available on the App Store for free.