Intel recently announced the seventh generation of their processors, marking a decisive end to the “tick-tock” strategy that they have been using for years. Tick tock was a strategy where Intel used to alternate between manufacturing processors on a smaller die (tick), and updating the architecture of the processors (tock). To put that in perspective, Intel’s 5th generation Broadwell processors were the “tick”, and the 6th generation Skylake processors were the “tock”. It was time, then, for Intel to move to another “tick”, and such was the plan. Intel was originally planning on moving from Skylake to Cannonlake, by using a 10nm process, but delays caused Intel to release another “tock” instead, which is why we are seeing Kaby Lake processors, using the same 14nm process, with some optimizations to improve their performance over the Skylake processors.

In this article, I’ll discuss the major changes, and the similarities between Intel Kaby Lake processors, and Intel Skylake processors. The gist, though, is that Kaby Lake will likely attract people who create and/or consume a lot more 4K content than the rest of us. 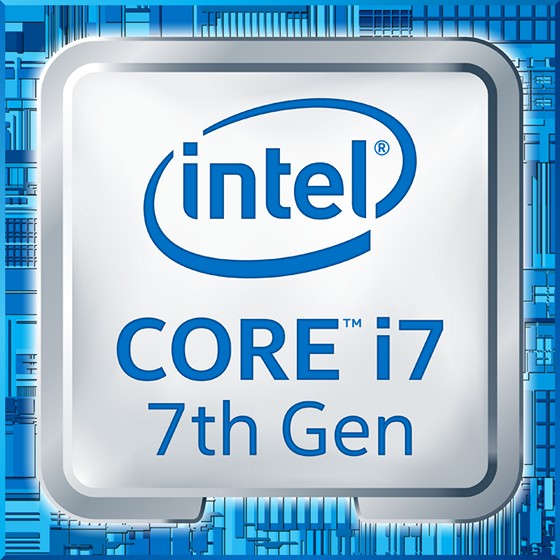 One of the major focus points in Kaby Lake processors is that it comes with native support for HEVC encoding and decoding for 4K videos. The processor kind of outsources these tasks to the GPU, now, instead of utilizing its own cores, which means that 4K videos can now stream much better, and use up a lot less battery. Also, since the CPU isn’t being used for the 4K heavy-lifting, it leaves the cores free to do other tasks that may be waiting in the queue. Apart from leaving the processor cores free, this also means that they will use less energy, which is why Intel has reported that systems running on Kaby Lake processors have, on an average, a 2.6 times better battery life than other systems, while playing 4K content.

Users will also see a drastic improvement in the 3D graphics performance offered by Kaby Lake as compared to older generation processors, which directly translates to a better gaming performance. Intel actually showed off a Dell XPS 13 running Overwatch running on medium settings, and pulling around 30 fps. 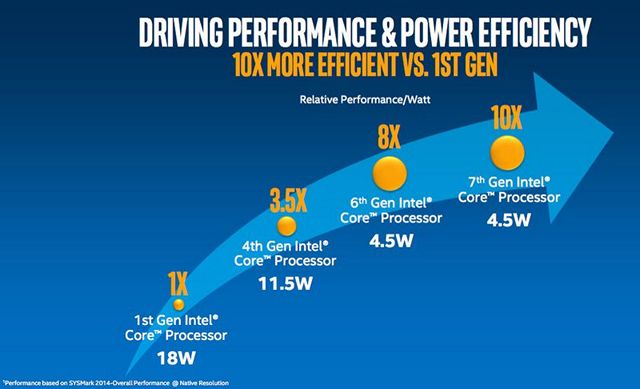 With Kaby Lake, Intel is basically optimising the architecture they used in Skylake, to bring faster clock speed and an increased turbo boost. Although, it is unclear how drastically this will affect real-world performance (it really should, though). The benchmark results that Intel released are promising. Since there is no new architecture involved, the only way that Intel has actually improved Kaby Lake processors’ performance as compared to Skylake, is by making optimisations, tweaks, and improvements under-the-hood.

Among these improvements and optimisations, is the fact that Kaby Lake processors will shift between clock speeds much faster than their Skylake counterparts. That’s not all, though, the seventh-gen processors also feature a higher base clock speed, and an even better gain under Turbo Boost. For a proper comparison of the base and overclocked clock speeds of Skylake and Kaby Lake processors, take a look at the tables below:

Note: While Skylake branded processors as m3, m5 and m7; Kaby Lake has changed the m5, and m7 to simply i5, and i7. This will obviously make it rather difficult for the average consumer to know whether they are buying a device with a Core m processor, or one with the much more powerful Core i3,5,7 processors. The only way to know this, now, is by looking at the complete name of the processors. The “m” models contain a “Y” in their name, whereas their more powerful counterparts contain the letter “U”.

The Kaby Lake processors are also going to support USB 3.1 Gen 2, which has a bandwidth of 10Gbps, 2 times higher than the USB 3.0 standard being used currently. Also, the seventh-generation processors will have native support for 4K HEVC encoding and decoding at 10-bit depths, as well as VP9 decoding capabilities, two things that are completely missing from the Skylake generation processors. HEVC, in short, is an encoding method which can reduce the bandwidth of video files by almost 50%, while maintaining the quality that was achieved using H.264 encoding.

Apart from that, Kaby Lake processors also support HDCP 2.2. For those who don’t know about HDCP, it’s an acronym for High Bandwidth Digital Content Protection. It is a form of digital copy protection (developed by Intel, by the way) to prevent copying of digital audio and video files, as they travel across connections. This is done by the transmitter first checking if the receiver has the authorization to access the content. If the receiver is authorized, the transmitter then proceeds to encrypt the content, so that it can not be read by someone eavesdropping on the connection. HDCP is used in interfaces such as DVI, HDMI etc.

Kaby Lake processors will also add native support for Thunderbolt 3.0, which in the case of Skylake processors, could only be supported on motherboards equipped with Alpine Ridge Thunderbolt Controllers. The seventh generation processors will also have support for Intel Optane, which is Intel’s branding for storage devices that will use the 3D XPoint (called 3 D Cross Point) technology. This is a big deal, because reports from claim that throughputs and write durability on storage devices using Intel Optane are as much as 1000 times higher than traditional flash storages, and latency is 10 times lower than NAND SSDs.

Other Improvements and Features

Kaby Lake also features some other improvements over its predecessor Skylake. While both the Skylake and Kaby Lake processors can have 16 PCIe 3.0 lanes from the CPU, Kaby Lake can have upto 24 PCIe lanes from the PCH (Platform Controller Hub), while Skylake can only have 20. Kaby Lake processors are also a part of the Intel 200 Series chipset, also called “Union Point”, whereas its Skylake counterparts were a part of Intel 100 Series chipset, also called “Sunrise Point”. The Kaby Lake processors also feature a wide range of TDP, ranging from as low as 3.5 W up to 95 W. Among the features that are common to both the generations of processors, are things such as support for up to 4 cores in the mainstream processors, 64 to 128 MB L4 cache memory, etc.

Kaby Lake has some significant improvements over Skylake, however, most of these improvements are not going to compel average users to upgrade their Skylake processor equipped systems with those equipped with Kaby Lake. Of course, with native support for HEVC encoding and decoding of 4K streams, there is definitely going to be a market for Kaby Lake processors, especially among people who create and/or consume a lot of 4K content, but for the average user, Skylake is quite clearly still relevant, and upgrading to a Kaby Lake processor, will probably not be worth the price. That is not to say that Kaby Lake is not a worthy upgrade to Skylake; it most definitely is. The numerous “under-the-hood” improvements made to the processor have Intel claiming that it has up to 2.6 times better battery life when consuming 4K content. This is probably due to the fact that Kaby Lake processors will use the GPU to do all tasks related to handling 4K video, meaning that the processor cores will be cooler, use less power and also be available for other tasks that they otherwise wouldn’t be.

As always, we would like to know what you think about the latest generation of processors from Intel. Are you considering upgrading to a Kaby Lake processor anytime soon? If you have any questions, or if you think we missed out on some crucial detail, feel free to let us know in the comments section below.