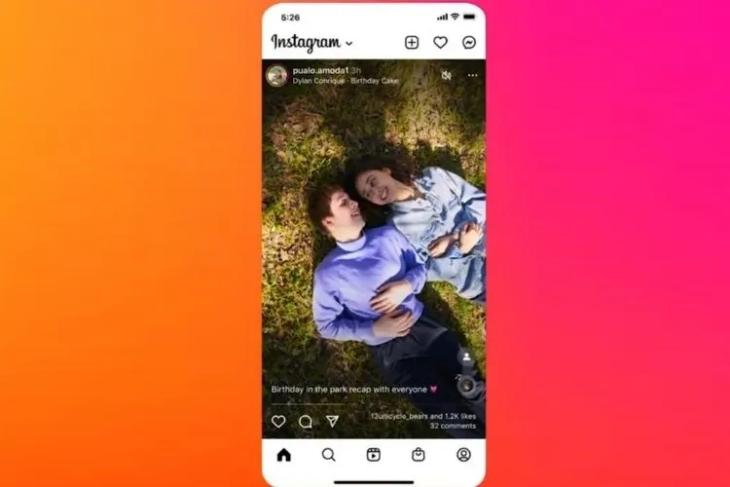 Instagram was one of the platforms to mimic TikTok when it got banned in India, and thus, came Reels. Ever since then, video content has become a priority for the platform. And now, to further its reach, Instagram has announced a change that shows a full-screen home feed o users. Here are the details.

As announced via a tweet by Instagram CEO Adam Mosseri, the Instagram feed will now appear in a vertical full-screen format with an aim to bring videos “more front and center.” This test will show both photos and videos in a taller format for a more immersive experience.

The shared image of the new experimental feed shows the Home, Explore, Reels, Shopping, and Profile sections at the bottom, much like they are right now. The options to change Instagram accounts, add a new post or Story, and the section that shows like, comments, and more notifications will be placed at the top.

While the image (refer to the featured image) misses out on the Stories section, an Instagram executive has confirmed (via TechCrunch) that Stories will continue to be placed at the top and won’t be going anywhere. So, if you are worried about it, don’t be!

Mosseri has revealed that the new feed will also show more recommendations and will provide more controls to personalize the experience. So, if you aren’t a fan of such recommendations, the app might soon come up with more features to keep things your control.

This is another attempt by Instagram to push the reach of short videos on its platform. To recall, last year, the company was clear that video is one of its priorities and so are content creators. Instagram recently tweaked its algorithms to give preference to original content instead of the rehashed ones. It is also a way to attract more TikTok users to Instagram with a similar UI, which will, in turn, lead to Reels’ better reach.

This is still a test. Hence, the new feed will appear for some before it reaches a wider audience. If you end up seeing the new feed, don’t forget to let us know your thoughts on it in the comments below.