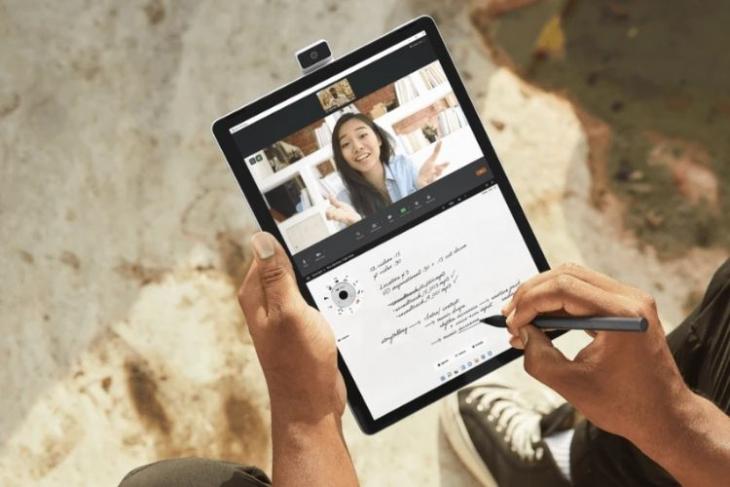 Back in September last year, HP announced the world’s first 11-inch Windows-powered tablet with a flip camera. Although the device was slated to be up for grabs sometime in December 2021 in the US, the promise could not be delivered at the time. Now, HP’s 11-inch tablet has finally hit the shelves in the US. Check out the details.

Initially spotted by Gizmochina, the HP 11-inch tablet is currently available on Best Buy with a starting price of $499 (~Rs 37,264). While the standalone device comes at the above price, customers can also buy the tablet along with a detachable keyboard accessory for a price of $599 (~Rs 44,732). The device comes in a single Natural Silver color variant and runs Windows 11 S Mode out-of-the-box.

Touted as the world’s first tablet with a flip camera mechanism, the device comes with a 13MP single rear camera that can flip out from the back to become a high-quality front-facing webcam. The mechanism is similar to the flip camera seen on the Asus ZenFone series, which launched back in 2020.

The HP tablet sports an 11-inch IPS LCD screen with touch support and a screen resolution of 2160 x 1440 pixels. Under the hood, the device packs an Intel Pentium Silver N6000 processor, with Intel UHD Graphics. It is paired with 4GB of RAM and 128GB of NVMe storage. There is also a dedicated MicroSD slot for further storage expansion.

The tablet PC is backed by a 32.2Wh battery that charges via the onboard USB-C port. The port can also be used to connect various other accessories to the tablet. Other than these, it comes with a side-mounted fingerprint scanner, support for Bluetooth 5.0, and Wi-Fi 6 for fast wireless speeds. Plus, the device supports the HP Tilt Pen to draw or take notes and a kickstand for portrait and landscape viewing.

So, if you are on the lookout for an intriguing Windows-powered tablet, you can check out the 11-inch tablet from HP on Best Buy. It still isn’t available via the HP website. Additionally, there is no information on when the device will launch in other markets but we expect HP to share more information in the coming weeks.