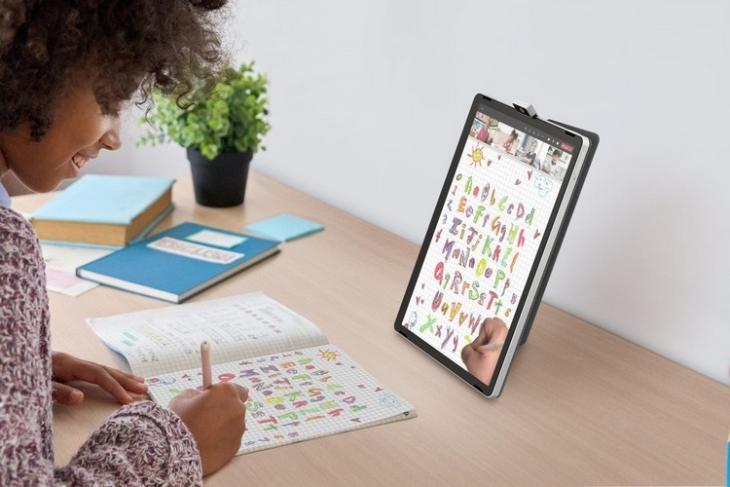 Following the launch of Microsoft’s new Surface Go 3 tablet, HP announced its upcoming 11-inch Windows tablet that will compete with the former later this year. However, unlike Microsoft’s offering, the HP tablet comes with a unique trick up its sleeve. And as you can tell from the title, it is the 13MP rear camera that flips out to become a webcam for higher-quality videos and selfies.

So, before moving on to the price and availability of the new HP tablet, let’s take a quick look at its key specs and features.

Starting with the design, the upcoming tablet from HP comes with a traditional tablet-like design and boasts an 11-inch IPS LCD panel with a 2160 x 1440p resolution. It works as a standalone device, thanks to the touch-supported display, or with a dedicated keyboard accessory. Moreover, users can use it in both landscape and portrait orientation.

Under the hood, the HP tablet packs an Intel Pentium Silver N6000 processor coupled with 4GB of RAM and 128GB of NVMe storage. The device comes with a MicroSD slot for storage expansion. There is also a 32.2Wh battery inside that charges using the USB-C port onboard. Furthermore, the USB-C port also supports other accessories that users can connect with the device.

Coming to its USP, the device features a 13MP rear camera that doubles as a webcam and a selfie snapper. For this, HP took a page out of Asus’ notebook and integrated a flip camera, similar to the camera module on the Zenfone 7 series that launched earlier last year. However, HP says that the flip-out camera on its upcoming tablet is a first for tablet devices, and we cannot disagree.

Other than this, the device comes with a side-mounted fingerprint sensor for biometric authentication, support for Bluetooth 5.0, and Wi-Fi 6 for faster speeds over wireless networks. Plus, the HP tablet also supports the HP Tilt Pen and will run the Windows 11 in S Mode out-of-the-box.

Now, turning to the price and availability, HP plans to launch this 11-inch tablet with a flip camera sometime in December this year. The company will sell the standalone device at $499 (~Rs 36,789) and will charge $599 (~Rs 44,250) for the tablet + keyboard combo.