With the release of Android 8.0 Oreo back in August, Google finally added one of the most-requested features to its mobile OS. The picture-in-picture mode, which allows the users to watch videos (especially YouTube) and do other things in a floating window while you use other apps, is one of the highlight features of Android Oreo and users have been loving it. But thanks to the long-existing fragmentation issue, a majority of Android users don’t even have the new Oreo update and thus, the picture-in-picture mode is out of the question. So, if you had been wanting to use this feature on your device, we have compiled a quick guide on how you can watch your YouTube videos in picture-in-picture mode on any of your Android devices:

Using an add-on app to emulate the picture-in-picture functionality on your Android device is possibly the best option available for use. The benefits being that you get to stick to the existing YouTube app and enjoy the videos you usually watch. For this, you can use the Float Tube Video app and follow the steps defined underneath to make it work: 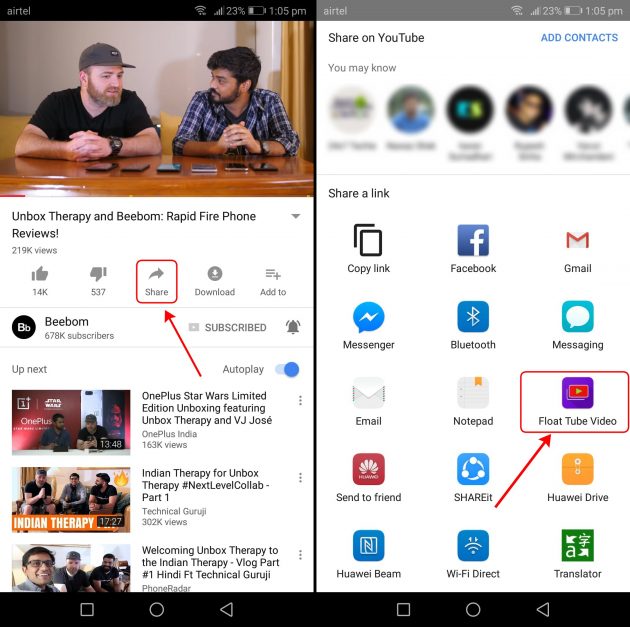 2. From the sharing screen, tap the “Float Tube Video” icon and you’ll see the video starts playing inside this app. Now, you’ll need to tap the icon at the bottom right of the video player (the one we’ve marked) to make the video go into picture-in-picture mode. 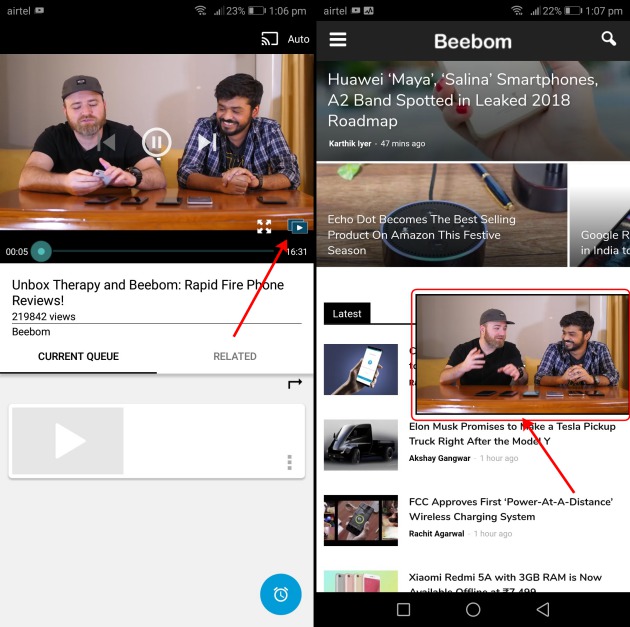 While there are dedicated apps to make YouTube videos float on your phone screen, you can also use a universal multitasking app that allows you to view any app inside a pop-up window.

1. Once you’ve installed the app, provide it the required permission and you’ll start seeing a ‘Floating Apps’ icons at the top left. It will make an appearance right on top of the notification bar, which you can customize as per your needs. 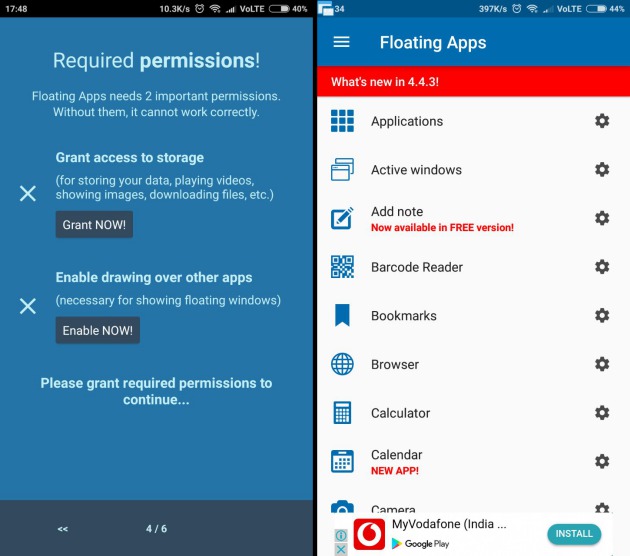 2. Now, tap on the floating icon in the notification bar, scroll down and select the YouTube app at the very bottom. This will open the YouTube mobile web app within a resizable floating window and you can search and play any video inside the same. You can search for videos you want to watch while using any other app on your device. 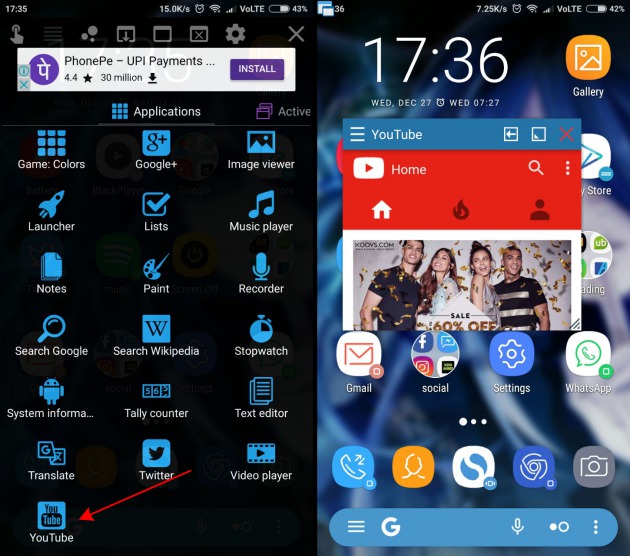 3. As you can see below, the Youtube video plays inside the floating window without any hiccups. You can tap the “X” button at the top right to close the said window once you are done watching the videos. 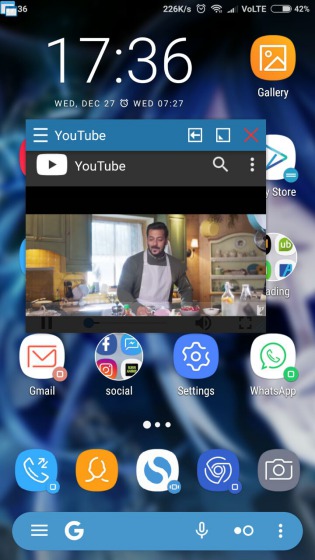 Now, we’ve already discussed two handy ways to watch YouTube videos in PiP mode but have you ever wanted your video history to be private? There are many users who’re not big on Google having access to a lot of their private information. Thus, NewPipe YouTube Player is exactly what they need in their life.

NewPipe YouTube Player is described as a frontend for YouTube that does not work with any of Google’s proprietary play services or YouTube API. Instead, it makes use of information parsed from YouTube’s website to play your videos. The history of the videos you watch using NewPipe is stored offline and can be accessed at any time.

The app is still in early stages of development but provides you the options to watch any video using picture-in-picture mode. Let’s check out how the process works:

1. First, you need to download and install the NewPipe app, which you could either do by downloading the APK right here or using the F-droid Android app repository. 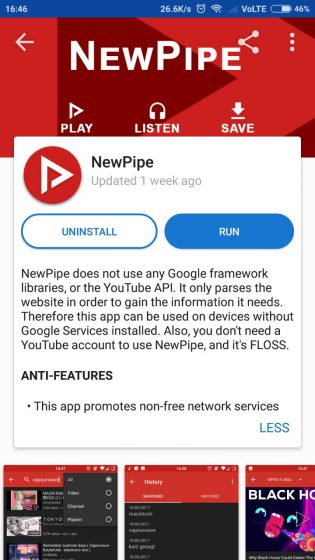 2. Once you’ve installed NewPipe, you’ll notice that the app boasts of a minimalistic two-pane interface. But, the search functionality will be the most beneficial for us since we cannot log into our Google account in this app. So, search for the video you want to watch while doing other stuff on your Android device and tap on it to play. 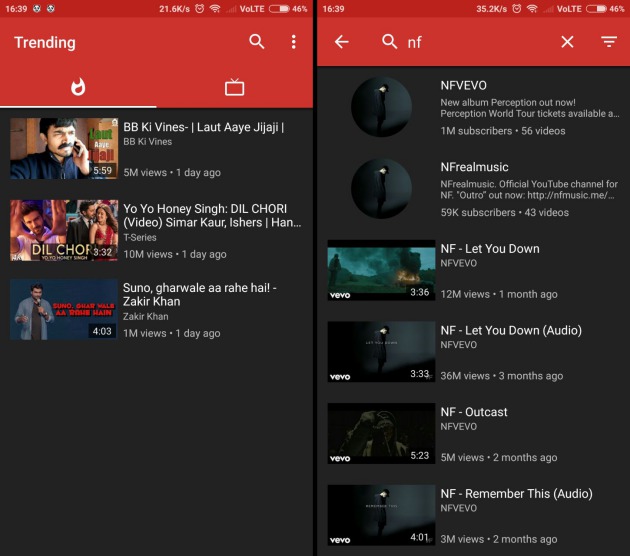 3. Once the video loads up, tap on the “pop-up” button and the YouTube video will start playing in picture-in-picture mode on your device. This is well and good but I’ve also noticed that NewPipe’s video player is one of the most intuitive among all options we present here. You can resize the pop-up window, change the video quality and speed, and double tap to seek the video back and forth. 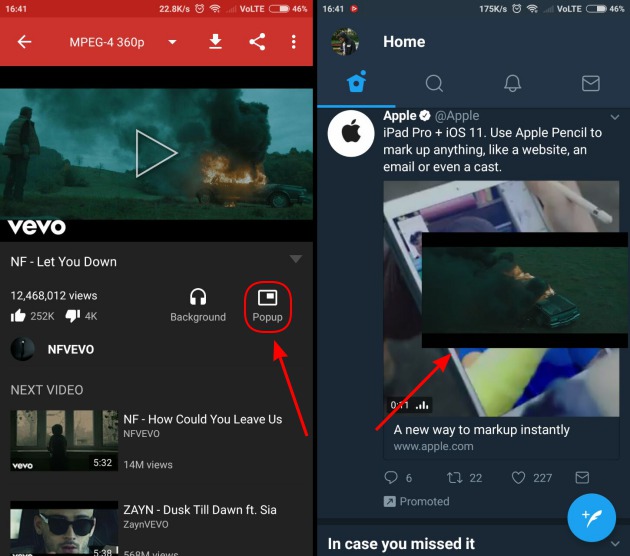 4. Once you’re done watching the video, you can pull down the notification shade and tap on the “x” icon on the NewPipe notification to close the pop-up picture-in-picture window. 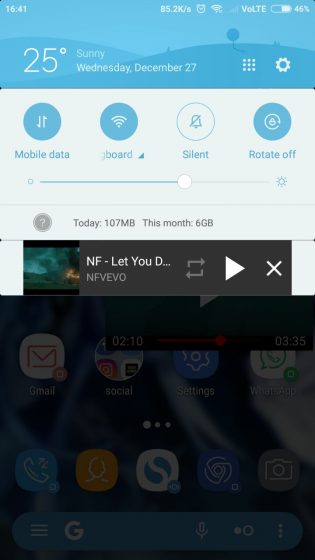 5. Another prominent reason I’ve using NewPipe to watch YouTube videos is that the app also packs the functionality to allow videos to keep playing in the background. It has been one of the most-requested features for regular users, but YouTube now charges you a fortune for its Red subscription to make the same available to you. 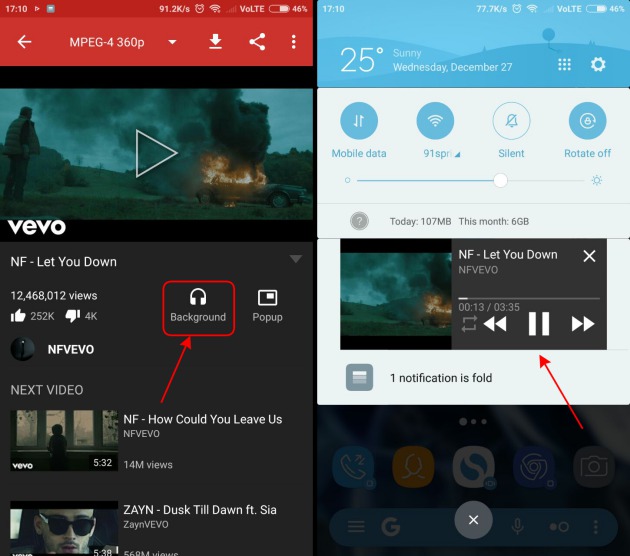 Using my previous point as a segway to talk about the native picture-in-picture mode in Android Oreo, it is available for apps that’ve added support for the same. YouTube sure was one of the first video streaming apps to bring along PiP mode but it’s been restricted only to YouTube Red subscribers.

While developers had previously discovered a simple workaround for the hefty YouTube Red subscription to get the picture-in-picture mode working for Youtube on any Android device, the same has been shut down by the video streaming giant. This means you’re still required to shell out $9.99 a month to get an access to the one significant feature of Android Oreo, in addition to original content and no advertisements.

Another important tidbit about YouTube Red, that many of you may not know, is that it’s currently available in five countries, namely the United States, Australia, Mexico, South Korea and New Zealand. So, the users living in these areas, with Android Oreo-powered devices are the only ones who’ll enjoy the benefits of the native picture-in-picture (PiP) mode. This is just an absurd play on Google’s part since PiP is one of the many better features of Android Oreo and it has now been reserved for only a section of YouTube users.

You’re, however, free to use Chrome to watch YouTube videos in picture-in-picture mode. Follow the steps outlined underneath to make it work:

Note: We tried this functionality on our Samsung Galaxy S8 running Android 8.0 Oreo Beta and it worked perfectly fine.

1. Open YouTube.com in Chrome browser, tap on the ‘three dots’ at the top left and select the ‘Open in Desktop’ option from the drop-down menu. 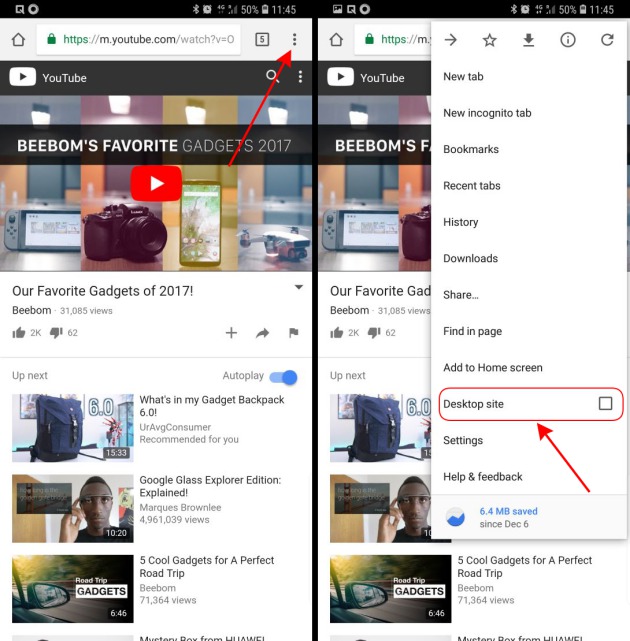 2. Once the video you wish to watch opens in the desktop mode inside the browser, all you need to do is play the video and switch to fullscreen mode. 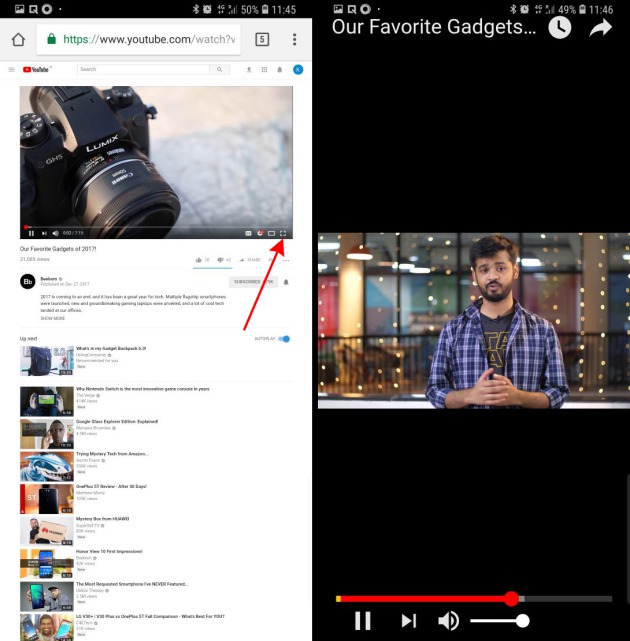 3. Now, the time to execute the most important step. Tap on the home button and the YouTube video playing in fullscreen within Chrome should automatically move to a pop-up window on your homescreen. And voila, you’re now watching YouTube videos in picture-in-picture mode on your Android Oreo device, without a YouTube Red subscription.

This is also a great way to watch YouTube videos in picture-in-picture mode if your device isn’t running Android Oreo. Telegram is a super secure messaging app that includes the ability to not only watch videos natively within the app, but also pull it out and watch them while you work on other stuff. Let’s check out the steps on how you can do the same: 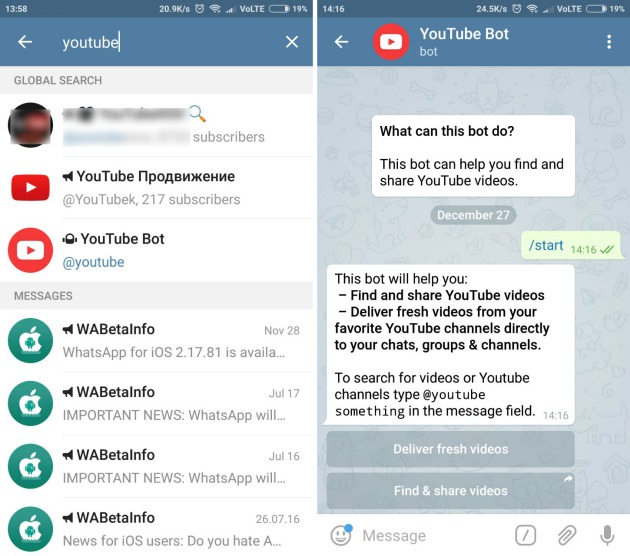 2. You then need to type out the ‘/auth’ command to connect your Google account to the messaging service. 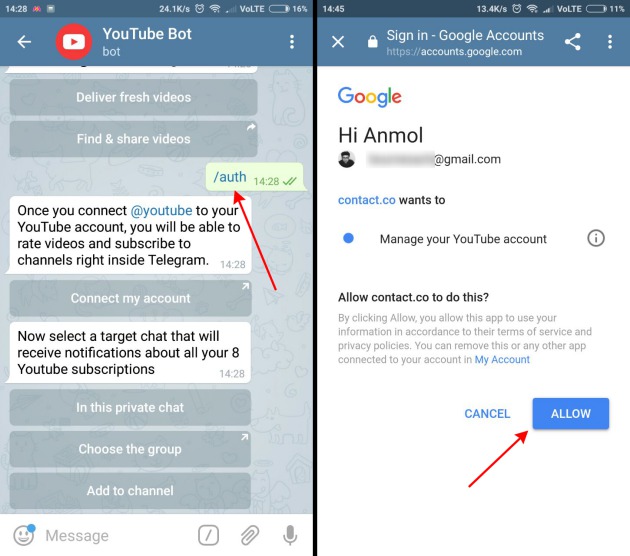 Note: This step is not really necessary as you can search and watch videos without doing so, but it’ll come in handy when you want to keep track of your history and watch a video from your subscriptions.

3. Once you’ve logged in, you can search for video by typing in “@youtube [space] title of the video or a Youtube star.” You’ll start to see suggestion cards and can tap any one of them to send the video in the chat. It is quite easy to play the same, you just need to tap the thumbnail of the shared video. 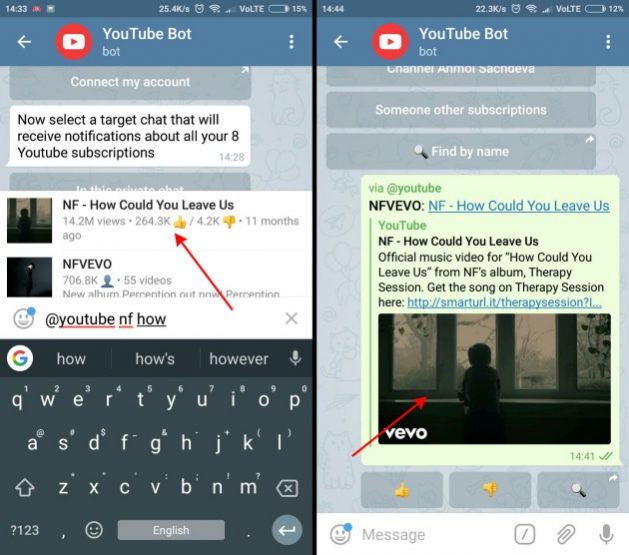 4. Once the video starts playing inside a native player, you’ll see there are two buttons at the bottom center of the player. Tap the left one (we’ve highlighted the same in the screenshot) to send the video into picture-in-picture mode. 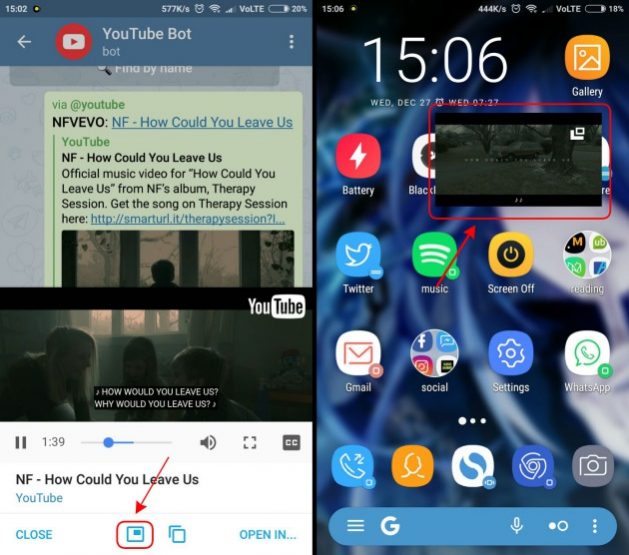 5. And voila, that’s all the steps required to make this work. You can now continue to use your device while enjoying your favorite YouTube video. It is not possible to resize the small PiP window and you can tap on the button at the top right of this window to return back to the app.

SEE ALSO: The YouTube App is Getting A Dark Mode Soon

While Android Oreo may have integrated the ability to watch videos in picture-in-picture (PiP) mode, it is highly possible that you still don’t have the latest flavor of the software. Thus, the aforementioned methods would come in quite handy for you to watch YouTube videos in a minimal picture-in-picture mode on any of your Android device. What method are you planning to adopt? Or do you have any better suggestions to make PiP work? Do let us know in the comments down below.