Access to the internet is a service used by almost every app out there. Be it for automatic updates, syncing data to the cloud, or just to verify license codes every few days, a lot of apps establish connections to various servers in the background. While some apps explicitly ask for our permission before establishing any outgoing or incoming connections with the internet, or a server, most apps don’t, especially when it comes to our Macs. With the amount of third party apps that we use everyday on our Mac, it is hard to know which apps might be using these connections for hidden, unwanted purposes.

There may be many reasons due to which you might want to block a specific app from accessing the internet, including, things like disabling automatic check for updates, or even disabling automatic downloads for updates. You might even want to block access to the internet to prevent yourself from using particular apps when you shouldn’t be using them. In this article I will be covering two great apps that allows a user to block specific apps from accessing the internet on Mac:

Radio Silence is a simple, no nonsense app that allows users to prevent apps from accessing the internet. This app ensures that the apps you add to the block list are not able to create any incoming or outgoing connections at all. The interface for the app is simple, and easy to use. There are no extra options to confuse you, and the app takes a “add it, block it” approach towards blocking internet access on a per app basis. 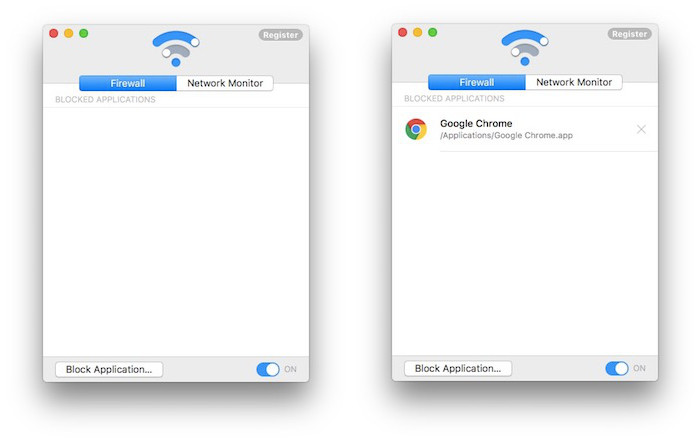 To add an app to the blocklist in Radio Silence, you just have to click on the “Block Apps” button, and select an App from your Mac. Once this app is added to the list, it won’t be able to access the internet, unless you turn off the firewall, or remove the app from the list of the blocked apps.

Little Snitch is the exact opposite of Radio Silence. It is an app meant for power users, who want absolute control over each and every process on their Mac that is trying to access the internet. Little Snitch might seem intimidating to casual users, and people who do not want to tinker with the built-in settings on their devices. However, for people who want total control over the apps and processes that get access to the internet, Little Snitch is by far the best app. The app asks for user permission every time any process or app tries to establish a connection with the internet, and it applies these rules strictly, even to system processes. 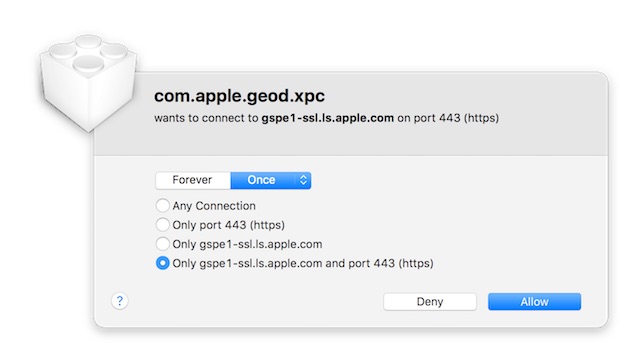 Using Little Snitch, you can block internet access even for Spotlight on your Mac, effectively stopping it from retrieving search results from the web. There’s no reason why you might want to do this, but it goes to show how powerful the app is. The app allows for creating rules for every app that the user wants to add to the list of allowed/blocked connections. 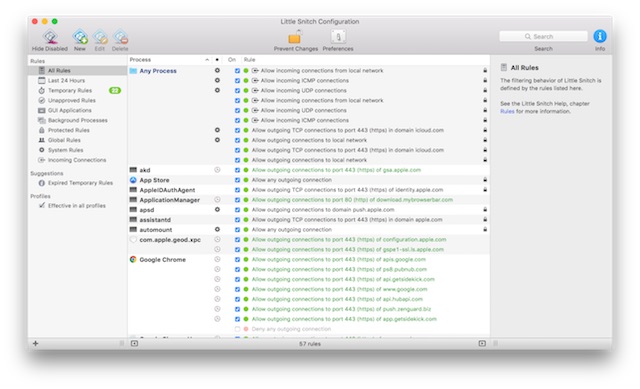 The best part about Little Snitch is the customisability and flexibility it offers to the users. For example, if you add Google Chrome to the list of blocked apps, you have the flexibility to completely block internet access for the app, or just to prevent certain websites from being accessed by the application, by using the “Domains” option in the “Server” drop down menu. 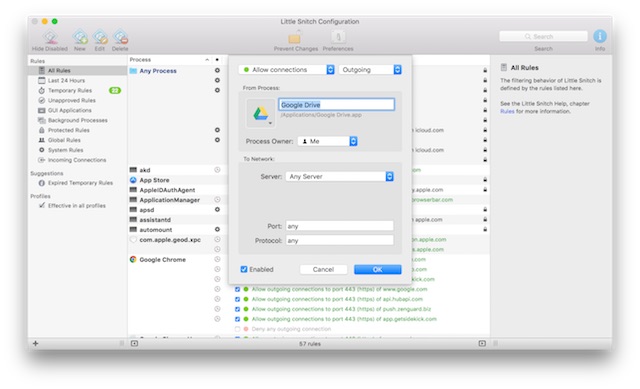 The app also allows you to create protected rules, so that they can’t be altered by anyone without the system password, effectively allowing only you to edit the firewall rules that you created. Little Snitch also has the ability to create profiles. This means that you can create different profiles for different types of usage. For example, you might create a profile for home and for work, where you allow and deny internet access to different apps, based on the apps that you want to be using when you’re at work, as compared to when you’re at home. Profiles can be switched with ease, and offer a lot of flexibility to the users.

Little Snitch can be a little cumbersome for casual users, though, because it makes every single process on your Mac to ask for your explicit permission before allowing it (or denying it) access to the internet. This can be a problem because of all the different, weirdly named processes that are used by the Mac, and if you don’t know what you’re doing, you might cause more harm than good from using Little Snitch.

Use the Mac’s built-in firewall

The Mac also comes with a built-in Firewall. The only problem with using this to block access to the internet, is that it doesn’t allow users to block outgoing connections from the Mac. It only allows users to block incoming connections on their Macs. The reason behind Apple’s implementation of a firewall, that is only “half” a firewall, is anyone’s guess, but the truth remains that if you want a fully fledged firewall on your Mac, you will have to rely on a third party application. 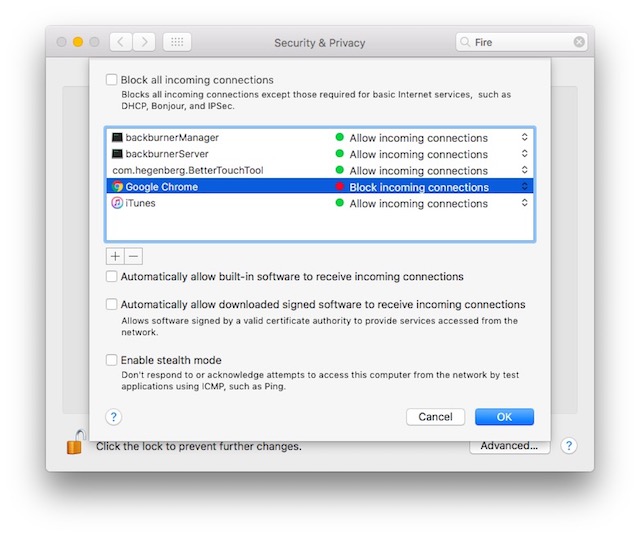 SEE ALSO: How to Block Internet Access in Specific Apps on Android

Using these apps on your Mac, you can allow or deny individual apps from accessing the internet, making sure that only the apps that you want are allowed to establish any connections with the web. These features can prove highly useful if you have a limited data plan, and don’t want unwanted apps from taking megabyte sized bites from your already limited data cap. If you are a power user, or if you want extra flexibility with firewall rules, Little Snitch is definitely the way to go, as it has some really great power features. But, if you just want to block access for some apps, and don’t want a lot of fuss over it, you can opt for Radio Silence, and it will get the job done; no questions asked. The app will not be able to access the internet, nothing less, nothing more.

Give us a shout out in the comments section below, and let us know about the apps that you prefer to use, to manage application specific firewall rules on your Mac, and feel free to ask us questions if you have any doubts or concerns regarding firewalls, and the apps that we have covered in this article.mac