A smartphone is only “smart” as long as it has an internet connection because you need a working internet network for various apps to work. However, that also means that these apps take up a lot of our internet bandwidth. And if you totally rely on mobile data for your Android smartphone and you don’t have an unlimited plan, your bandwidth should get over pretty soon. The problem is, some apps use the internet even when they are running in the background. While communication apps like WhatsApp, Messenger need to be connected to the internet all the time, other apps don’t really need to be connected always. So, if you have a limited data plan or even a broadband WiFi connection which has a monthly bandwidth limit, you should limit the internet usage of apps on your Android smartphone.

You can easily set background data restrictions for specific apps on Android. All you need to do, is head over to Settings->Apps and select the app you want to block background data for. In the App Info page, you can tap “Data usage” and here, enable “Restrict app background data”. This makes sure that the app does not fetch any mobile data while running in the background. However, if you open the app, it will use the internet. 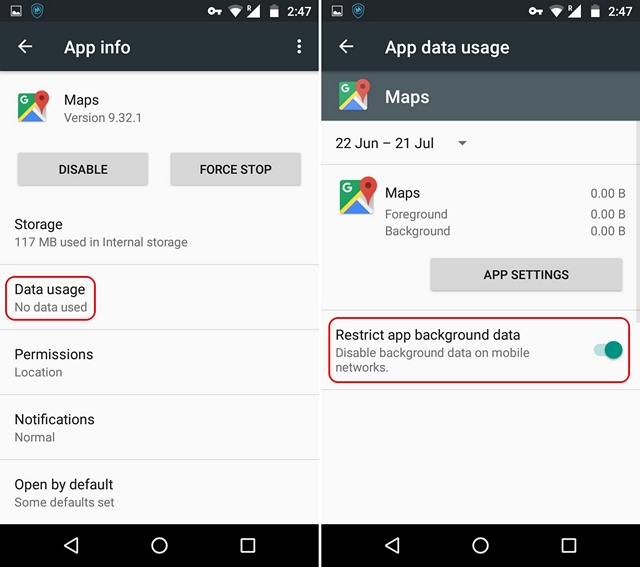 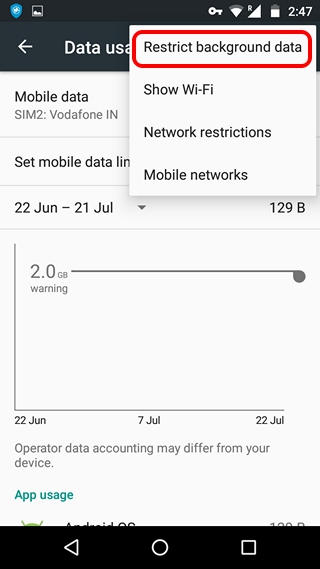 Android N includes a Data Saver mode, which basically restricts the background data on all apps. However, you can select the apps you want to enable unrestricted data access for. 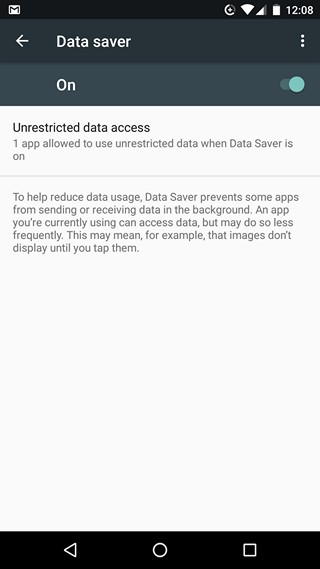 While the native Android methods work fine if you are looking to only restrict usage on mobile data, there are third party apps that let you block mobile data as well as WiFi connectivity for certain apps:

While there are a few good apps that let you block internet for specific apps, we’ll suggest you Mobiwol because it’s free and it brings most of the features you’d need. So, install Mobiwol on your Android smartphone and follow the steps:

1. When you first open Mobiwol, you will see the home page of the app with its main options listed upfront. You can go to “Firewall Rules“, where you will find all the apps on your device including the system apps. You can just tap on the mobile network & WiFi icon to disable the respective connections for the app. 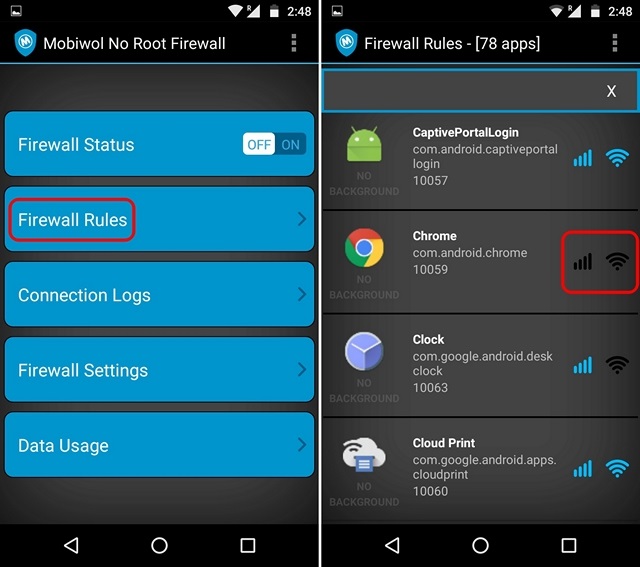 Note: Be careful to not block system apps because that may lead to unexpected behaviour and inconsistent performance of your device.

2. Once done, you can go back to the main page of the app and turn on “Firewall Status”. When you turn it on, the app will make a VPN connection request. Tap “Ok” and the firewall will turn on. 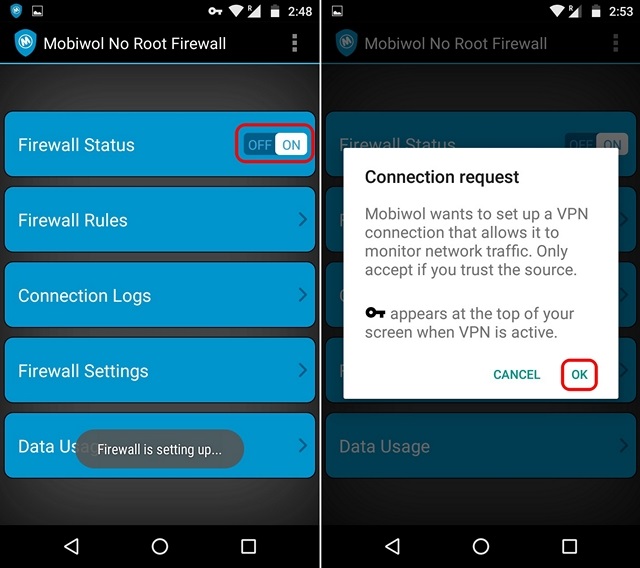 Note: Mobiwol and most other similar firewall apps create a VPN connection, so that they can filter the internet connection on your device to stop usage on blocked apps.

3. Then, you can try opening the blocked apps and you will see that they don’t have internet access. Mobiwol also lets you check the apps that are using the connection in the background via “Connection Logs”. 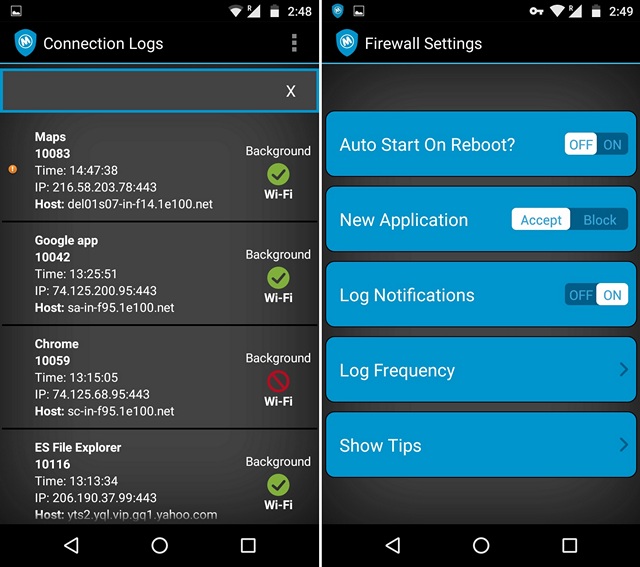 Other than that, you can check out the app settings to make sure it auto-starts on reboot, accept or block newly installed apps, get log notifications and its frequency and get tips about the app.

If you would like a more feature rich app, you can try the below mentioned apps that also let you block internet in specific apps:

NetGuard is another great firewall app that not only blocks internet access for specific apps but lets you use conditions like allow WiFi/mobile data when screen is on and block internet while roaming. It also supports multiple device users, tethering and more. Some would say that NetGuard is even better than Mobiwol but the problem is, NetGuard’s unique features like log out outgoing traffic, network speed, ability to block addresses etc. are available only in the paid version of the app. 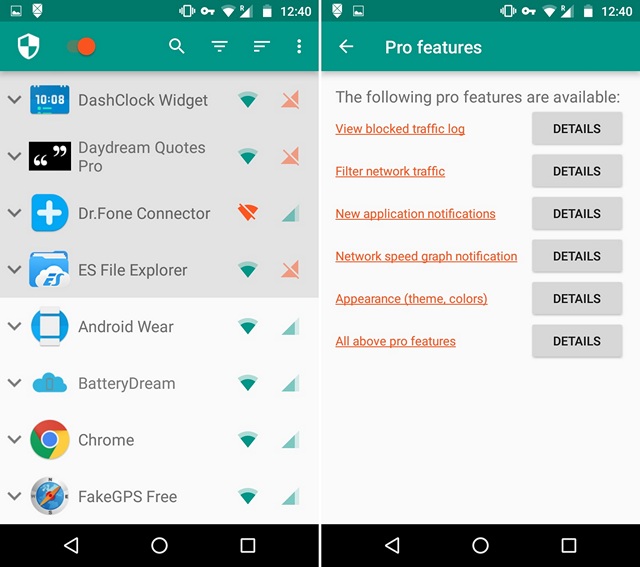 NoRoot Firewall is a highly popular firewall app that brings advanced capabilities to the table. The app not only lets you block mobile data/WiFi access for apps, it also lets you set custom filters and conditions based on IP address, domain name and host address. While the app’s interface might seem clunky, it is available for free, so you can give it a try. 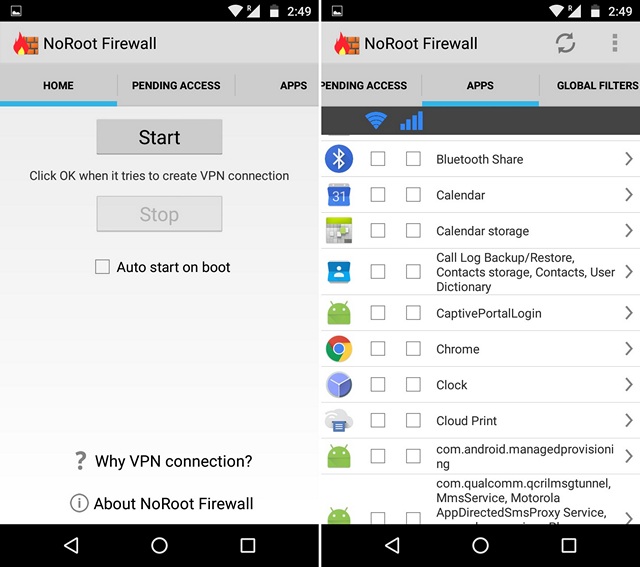 SEE ALSO: How to Get Firewall Access on Android Without Root

Block Unwanted Apps From Eating Up Your Bandwidth

If you are okay with just restricting background data for apps, you can do it on Android easily. However, if you need to block internet access altogether for unwanted apps, you will have to rely on the aforementioned third party apps. These apps work great but the only limitation they bring is VPN, which might lower down your internet speed a bit. We have tried the apps and the decrease in the internet speed is not huge, so you can certainly use these apps. Well, try these apps and let us know how you like them in the comments section below.